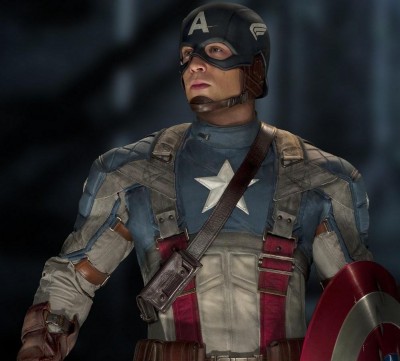 Being the fourth superhero offering of the summer, "Captain America" arrives in theaters without the benefit of a fresh launch, stuck trying to assemble thrills in a costumed crusader farmland already picked clean. The upside here is a distinctly retro adventure that feels like a funny book page-turner, playing up its WWII setting with obvious joy and care for the character's origins. The downside is the influence of modern technology, shining up a 1940's hero with glossy 2011 filmmaking tools, making the picture resemble more of a video game than an epic realization of jumbo comic book details.

A 90-pound weakling determined to join the military during WWII, Steve Rogers (Chris Evans) has been repeatedly rejected, watching as his friends march off to defend their country. When a German doctor (Stanley Tucci) recognizes the courage within the puny man, he convinces Steve to partake in a special transformation program designed to generate super soldiers. Accepting the experiment, Steve comes out a radically changed man, filled with strength and ready for battle. However, it's a long road to the front lines, with the newly dominant soldier sent down a different path of wartime inspiration, soon motivated into duty when the villainous German leader of HYDRA, Red Skull (Hugo Weaving), takes possession of a special power source known as the Cosmic Cube, threatening to destroy the entire world. Aided by Peggy Carter (Haley Atwell), Col. Chester Phillips (Tommy Lee Jones), and a special shield designed by Howard Stark (Dominic Cooper), Steve becomes "Captain America," ready to take on evil. 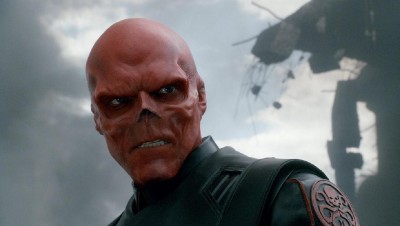 The director of "Captain America" is Joe Johnston, who already submerged himself in Nazis and WWII with 1991's vibrant comic book adventure, "The Rocketeer." On the surface, Johnston seems like the ideal man for the job, already revealing a steady hand with gee willikers Americana and feats of exaggerated heroism. However, "Captain America" is a far more complex character and world to bring to life, especially in a sensitive modern era, where a man dressed up as an American flag isn't going to be as warmly greeted as he once was.

The delicate balancing act between patriotism and pathos is handled with care by the screenwriters, who devise a clever way to transform Steve from a wimp to the titular character, playing up the superman as the face of the war effort, shoved out into the world as a cartoon figure of hope, rapidly morphing into the real deal. The picture is skillful with acts of exposition, doing a bang up job getting the characters into position. Though it takes some time to establish Steve's origin story, once Captain America selects a shield and a functional costume, Johnston achieves a sparkling tone of flashy action, displaying the starred champion leaping, punching, and flinging his iconic shield around, taking out HYDRA goons armed with deadly blue lasers. The film is a blast when it finally spotlights Steve's derring-do, permitting Johnston a chance to isolate the Captain America basics everyone wants to see. 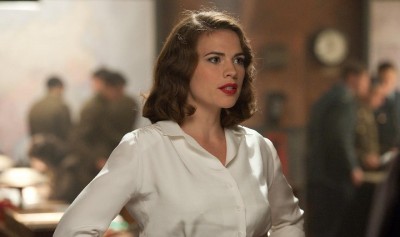 Unfortunately, Johnston hasn't mounted a feature of realistic minutiae, relishing the WWII recreation possibilities. Instead, "Captain America" is a glossy production deluged with greenscreen work and CGI beautification, robbing the film of natural wonders. The visual work here ranges from interesting (Evans's head is pasted on a double's scrawny body for the pre-Cap version of Steve, creating a distracting bobblehead effect) to misguided (Red Skull looks creepy enough, but the digital touch ups smooth out the character's twisted appearance) to lousy (backgrounds rarely convince). This is a production that cries out for substantial practical effects and vast locations, not extensive computer creations that keep this colorful universe disappointingly one-dimensional -- a problem aggravated by the movie's dreadful 3D conversion.

Also of concern is Evans, who appears to have chosen "heavily sedated" as his acting motivation for Steve. This being his second superhero effort (having played Johnny Storm in two crummy "Fantastic Four" movies), one would expect a certain genre gusto emerging from extensive practice. No such luck. Lacking charisma, the actor plays his dual character with a vanilla glaze, worried more about external appearance than emotional complexity. Also on the dreary side is Atwell, perfectly zombified as the love interest and all-around tough gal. It's difficult to root for this pair when both actors seem like they just awoke from a nap. More fun is Jones, growly and bitter as the military man in charge, and Weaving, fitting himself for a Werner Herzog accent to play the skinless cartoon menace and Hitler one-upper. 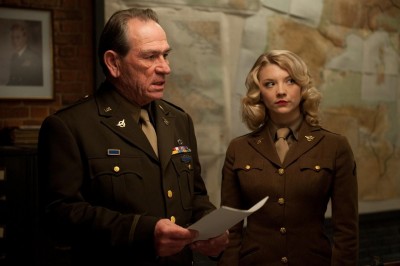 "Captain America" has numerous highlights and carries a jovial tone of valor that develops a rah-rah America atmosphere without overkill. Still, the promise of the material is not fulfilled in any substantial way. Actually, the movie feels more like a prequel to next summer's "Avengers" superhero convention, with Steve's story not offered its own identity like his costumed brothers and sisters have been gifted. Still, there's promise here that will immediately be built upon, hopefully in a more organic manner that sustains the fantasy but retains some needed texture.