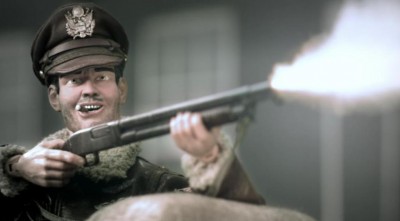 A blazing WWII farce, "Jackboots on Whitehall" is acted out entirely by a group of puppets, which has to be every film director's dream. Blending the alternate history rhythms of "Inglourious Basterds" with the freewheeling cartoon impulses of "Team America," the picture is a refreshing offering of comedic insanity. The movie tuckers out quickly, but when its mix of chaos and slapstick comes together, it makes for a highly enjoyable curiosity.

Desperate to seize London and imprison Winston Churchill (voiced by Timothy Spall), Adolph Hitler (Alan Cumming) and his troops storm the city, destroying everything as they search for their prize. Coming to Churchill's rescue is farm boy Chris (Ewan McGregor), a local outcast with enormous hands, ready to protect his country from invaders while romancing Daisy (Rosamund Pike), a local girl. Retreating to the wilds of Scotland, Chris, American pilot Simon (Dominic West), and various armies prepare to protect their land, using Hadrian's Wall as a defensive position. When the Nazis arrive to squash the opposition, Chris learns of his true heritage, leading an explosive attack against Hitler's men. 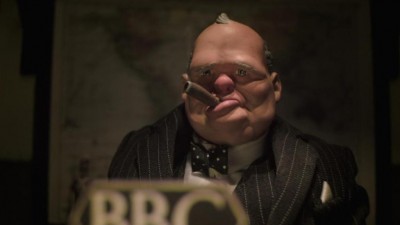 What directors Edward and Rory McHenry have created with "Jackboots on Whitewall" is an extraordinarily broad spoof of WWII films, deploying a cast of puppets to give the intended cartoon, semi-satiric effect. While it opens with a light frosting of absurdity, the picture quickly cannonballs into the deep end of silliness, using Chris's journey from rube to rebel as a backdrop to world of pure goofballery, articulated by plastic creations of superb detail and limited mouth movement.

Imagine a universe of Barbies and Kens recreating the anarchy of war, and that's "Jackboots on Whitehall." Without a human element to pin their imaginations down, the directors accelerate the lampoon, turning a modest idea of Nazi rule in London into a demented joyride of mischief. There's nothing even remotely serious about this picture, a delightful plan of attack supported by an enthusiastic ensemble of actors digging into their roles with palpable glee. The McHenrys don't seem to care much for history, taking the WWII setting as a starter pistol for massive displays of screen destruction, with the puppets crashing planes, firing guns, and driving tanks, generating a Looney Tunes mood of lighthearted obliteration. It's a noisy picture, but with an inspired handle on mindless violence. 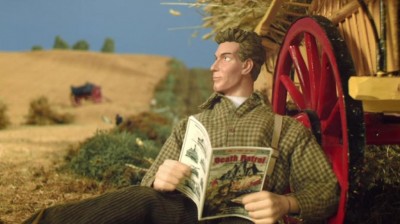 If the comedy doesn't seem interesting, the miniature production design is definitely worth a look. Fun-sizing WWII locations, "Jackboots on Whitehall" reveals extensive creativity and meticulous craftsmanship, extending to the tiny costumes and impressive firepower. The picture is a pauseable wonder, displaying entertaining background details and exaggerated puppet design, permitting the viewer to scan the minutiae when the script slows to a crawl. 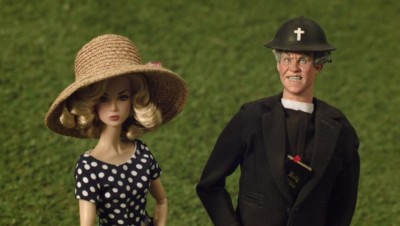 The anamorphic widescreen (1.78:1 aspect ratio) presentation sustains the cartoon atmosphere by retaining the bright colors of the image, with a solid read of reds and blues, with special attention to the varied costumes. The tiny details aren't obscured by any serious digital hiccups, holding together quite capably, even during furious battle encounters. Black levels are acceptable, steady during complex evening sequences. 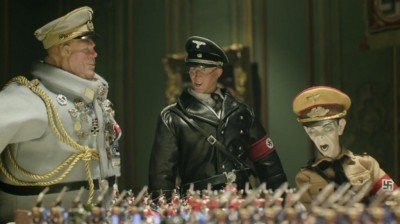 "Behind the Scenes" (29:40) is an amazing, fly-on-the-wall look at the creation of the film, with a swarm of crew members fussing over puppet details while arranging grand scenes of wartime confrontation. It's bare, but perfectly so.

The following supplements suffer from poor video quality and, in a few cases, mangled editing.

"The Swastikas" (1:44) displays the delicate preparation of a scene featuring an army of feisty Nazi soldiers.

"Bad Day to be a Nazi" (2:20) covers puppet gore requirements as the enemy meets the brutality of a vicious Scottish army.

"Hitler's Rat Pack" (1:52) explores the trial and error plan of attack as the McHenrys work with an toy car to motor evil forces through the gates of Buckingham Palace.

"Voiceovers" (:51) spotlight the McHenrys as they tender some background noises of their own. 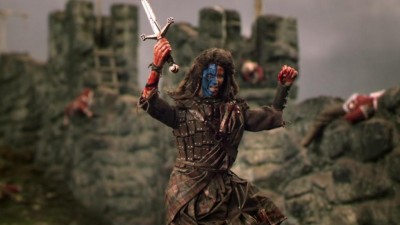 Settling in for a combat free-for-all between English and Nazi armies, the McHenrys instead take a monumental leap in slapstick, introducing Braveheart to the film. Not William Wallace, but Braveheart, who even makes a few "Lethal Weapon" jokes. Even for a film of impish behavior, this development is a bit much. In fact, all of "Jackboots on Whitehall" is a bit much, but a few sequences truly seize the magic of the concept. After all, it's hard to dislike any film that reimagines WWII with puppets.