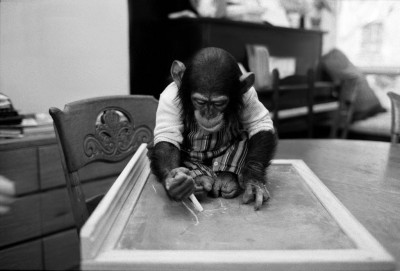 It's difficult to ascertain exactly what story director James Marsh is attempting to tell with his latest documentary, "Project Nim." Part bio-pic, part animal cruelty call to arms, and part scientific study, the feature is an engaging, horrifying look at the life and times of a special chimpanzee, but doesn't quite bundle the reveals and the revulsion in a tight cinematic package.

Removed from the care of his mother after only two weeks of life, chimpanzee Nim Chimpsky was selected to take part in an extraordinary study where the young animal would be raised as a human baby and taught sign language as a method of communication. The goal, as arranged by Columbia University scientist Herbert S. Terrace, was to find a connection between humans and chimps through the miracle of language, to study if animals were as hardwired for communication as humans. In 1973, Nim was handed over to his human mother, Stephanie LaFarge, soon embarking on a heartbreaking journey where the young chimp was subjected to numerous caretakers, environments, and the potential for animal testing, stressing the creature to a point of psychological collapse throughout the 1970s and '80s. 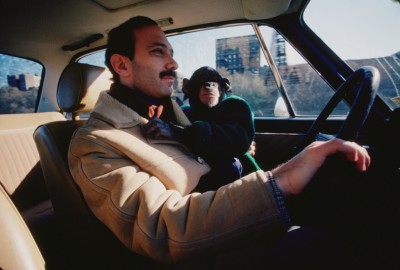 Deploying a method of interviews, footage, and dramatic recreations solidified in his 2008 documentary, "Man on Wire," Marsh sets his sights on this little chimp and his incredible life of interaction and need, with "Project Nim" devoted to his story, arranging a potent menagerie of faces and events that follow Nim as he's bounced around the country in search of a proper home.

There's an incredible story to dissect here, with nothing overtly bothersome about Marsh's approach. The director lays all the information out cleanly, with Nim's early life in the care of LaFarge explored in lurid detail. The union provides an interesting snapshot of intellectual blinders, with the seemingly refined woman returning to recount her time spent with Nim, bonding with the chimp through breast feeding, playtime, and sexual curiosity (unexpectedly, LaFarge doesn't seem particularly fazed by the intimate discussion). Taking to sign language easily, Nim matured with a feisty balance of animal instinct and human need, graduating to a more scientific plateau, encouraging Terrace to bring in various research assistants to study and bond with the chimp, uneasy students who endured their fair share of bites and aggressive horseplay. 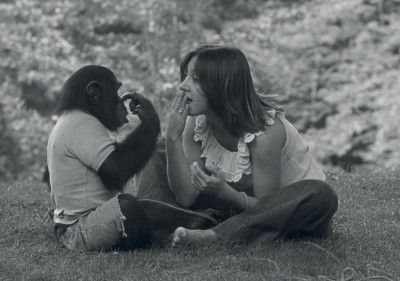 As animals are wont to do, Nim grew older, hitting a certain age where his strength was too much to bear, leading to a situation of separation -- a chimp once valued for his scientific use was now a burden with nowhere to go, raised as a human without the necessary animal instincts to survive. Marsh hits the cruelty note with a sledgehammer, pulling chilling interviews from Nim's handlers as they project unimaginable guilt (save for the frosty Terrace) over their part in the creature's dismissal. Animal lovers will be enraged and that's exactly what Marsh is looking for. Alas, Nim's journey of misery and confusion doesn't end there.

"Project Nim" is a convincing statement of mistreatment, and while there's something near a happy ending, the documentary seems more interested in the chimp's torment than supplying a rounded exploration of the facts. I left the film with numerous unanswered questions -- I don't doubt the obscene treatment, but I wanted more with the early years, exploring how this study affected a larger expanse of personalities, with Terrace a particular question mark by the end of the film. Perhaps widening the scope of the piece would diminish Nim's role, pushing the chimp aside once again.

"Project Nim" introduces quite an extraordinary tale of woe from a puzzling subject, but its aim is slightly off, diluting the final summation of a wholly troubling existence.