"Paul" should be a simple wacky sci-fi comedy filled with pot humor, unrelenting profanity, gay panic, and dry Brit humor. Instead, the film is primarily constructed as a valentine to the fantasy genre, showing more interest dreaming up inside movie references than spewing one-liners. "Paul" is pure geek bait, an oasis of unadulterated affection for all things sci-fi. The movie bleeds green. Thankfully, in the care of screenwriters/stars Nick Frost and Simon Pegg, the picture casts an amusing intergalactic spell, borrowing a Spielbergian concept and filling it with all sorts of enjoyable absurdity and R-rated mischief.

Two English buddies still reeling from their otherworldly adventures at Comic-Con, Graeme (Simon Pegg) and Clive (Nick Frost) have embarked on an RV tour of American alien encounter landmarks, hoping to soak up some extraterrestrial history to feed their geek brains. Instead of tourist traps, the boys find Paul (voiced by Seth Rogen), an actual alien who needs help from the baffled pair to make his way home again after years spent feeding the military and Hollywood his secrets. Accepting the challenge, Graeme and Clive hit the road with the sociable visitor, forming a bond with Paul that's put to the test when Agent Zoil (Jason Bateman) picks up their trail, speeding across the southwest to capture the prized alien for his enigmatic government boss. 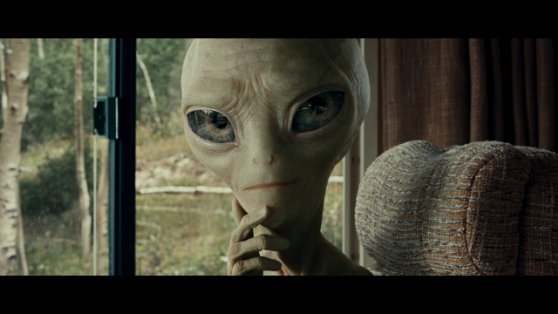 With "Paul," Frost and Pegg, along with director Greg Mottola ("Superbad"), employ a formulaic story of a runaway alien and his human pals as an excuse to monkey with a genre that's informed their cinematic tastes. It's bold and broad, but not exactly a farce, with the screenplay taking time to understand the passions of the characters before embarking on wilder bits of humor. "Paul" might have the appearance of one-note slapstick marathon, but Pegg and Frost shake up the film with their personalized sense of humor, lending the film more of a fanboy personality than a consistently vibrating funny bone.

While muted to a certain extent, "Paul" has a majestically crude comic spirit, spotlighting an alien that enjoys marijuana and causal cursing. A little green jokester, Paul isn't handled with any sort of widescreen awe, instead put forth as a wiseacre with magical healing powers, bonding with his human pals over the mysteries of the universe and the joys of full frontal nudity. Voiced with a pitch-perfect irreverent tone by Rogen (if there was ever a wit built for CG creatures, it's this guy), Paul is an intriguingly profane discovery, painfully aware of human reaction to his appearance and tired of using his powers of invisibility. All he seems to crave is weed and conversation, making the character less of a joke machine and more of an amusing peculiarity. A little green bro. 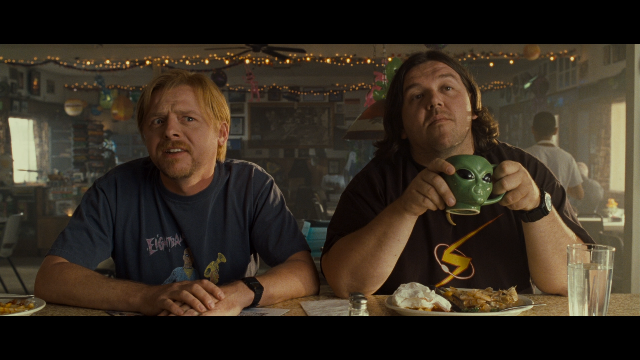 Expectedly, Frost and Pegg fill their nerdy roles with zeal, having a blast playing second fiddle to a smart-aleck visual effect. The performances are charming instead of overly bothered, with an easy chemistry that helps the film find what passes here for sensitivity. Also merry is Kristen Wiig, playing a one-eyed bible-thumper who craves sinful delights once Paul shares his view of the universe with the frightened woman. Wiig gives the silly business a friendly texture, adding a foul mouth and some needed feminine spark to the acidic merriment.

"Paul" is a very funny picture, but it doesn't always chase the joke, which initially feels like a major tonal mistake. However, what the film lacks in bellylaughs it more than makes for in sheer geekery, with Mottola and the writers filling the frame with references galore, most centered on the cinema of Steven Spielberg. A few of the gags and lines are clunky, delivered self-consciously by the cast, but the majority of the picture creates a swirling sense of sci-fi devotion, conveyed with a heartfelt tone that makes "Paul" feel like an elaborate inside joke most viewers should be able to enjoy. 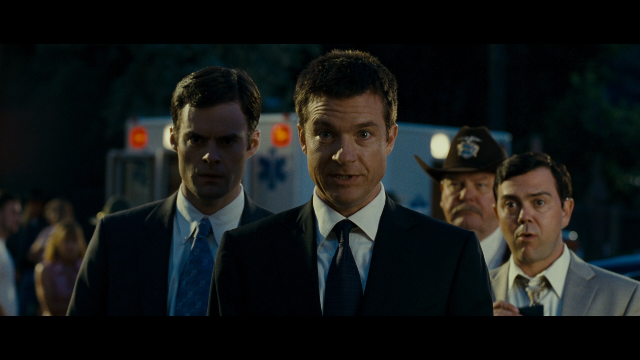 The references only add to the fun, making the feature a game of homages, which range from the obvious to the terrifyingly particular. You don't have to be a student of sci-fi to get all the jokes, but Pegg and Frost script with a geek POV, creating a passion that helps to elevate the film when it tires of dick and fart jokes. 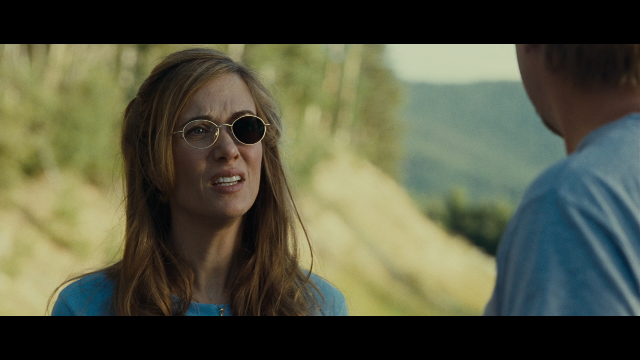 "Paul" is presented in two versions: the Theatrical Cut (103:48) and the Unrated Cut (109:18). While no plot additions are present in the UC, it's a film heavier with jokes and tangents, filling out the picture with superfluous asides. Fans might enjoy the longer cut, but the TC is best for efficiency and timing.

The AVC encoded image (2.35:1 aspect ratio) presentation contains the sci-fi and the silly quite well with a bright viewing experience that reveals all types of details within the frame, from alien anatomy to location minutiae. Colors are bold, holding to alien greens and lush costuming hues, with everything cleanly displayed and controlled. Lighting is quite vivid here. Skintones are quite pink and pleasant, while shadow detail is supportive, sustaining the texture of the film's evening events. The visual effects are also well cared for, blending into the frame without an artificial feel.

The 5.1 DTS-HD sound mix is a rambunctious listening event, playing up the comedic anarchy of the film with extensive directional activity, emerging from all sorts of violent and slapstick encounters. Dialogue is crisp and clean (Rogen's delivery is meaty), feeling circular when a group dynamic assumes command, with all voices sounding fresh and direct. Scoring is pronounced but well separated, while soundtrack cuts provide some additional strength. Low-end is strong when the action kicks up, and atmospherics are evocative, giving ambient life to chases and small town encounters. DVS, French, Spanish tracks are also included. 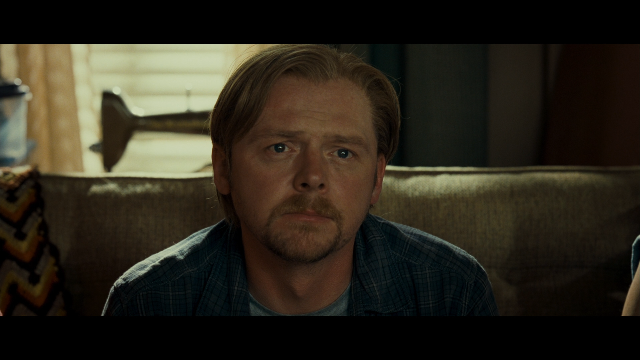 The feature-length audio commentary with director Greg Mottola, producer Nira Park, and stars Simon Pegg, Nick Frost, and Bill Hader makes the expected leap toward comedy, with the group electing a more leisurely route of conversation. Pegg is the dominate personality, guiding the gang through screen particulars and location camaraderie, while the whole group chimes in with their own anecdotes and one-liners. The best tangents are the most unguarded moments, especially talk of Steven Spielberg's participation and the lengthy evolution of the script. The track is frequently hilarious (Hader always knows when to strike), yet it keeps informative and focused, even if the participants seem a little tired.

"Bloopers" (10:51) is an epic exploration of the film's mix-em-ups and on-set tomfoolery, with the centerpiece being an impromptu smooch between Frost and Pegg, finally giving fans what they've always wanted.

"Between the Lightning Strikes" (40:04) is a marvelous making-of documentary, dissecting the creation of "Paul," which began life six years ago as a naughty Simon Pegg doodle. The filmmaking experience is explored in full, with cast and crew interviews discussing daily life with a CG creation, also sharing their love for sci-fi, excited to be joining the genre. There are multiple delights here, including a chance to see how Seth Rogen worked motion capture to bring the character to life. My favorite section here covers the research trip Pegg and Frost endured to see America and bang out the script. Working from inception to scoring, the documentary is wonderfully comprehensive and, with this gang of funny people, always amusing.

"The Evolution of 'Paul'" (15:05) explores the work and care required to create the titular character, meeting the entire crew of animators tasked with bringing this curious character to life. The discussion of animation nuances is appealing, but the real treat here is the test footage, not only revealing how Paul was shaped for the final film, but Graeme and Clive as well, who were initially conceived as outlandish dorks.

"Simon's Silly Faces" (1:02) is a short montage of Pegg mugging for the camera.

"Who the Hell is Adam Shadowchild?" (2:10) is a collection of film clips and horsing around, shedding light on the pompous sci-fi author played by Jeffrey Tambor.

And Three Theatrical Trailers and Nine Television Spots are included. 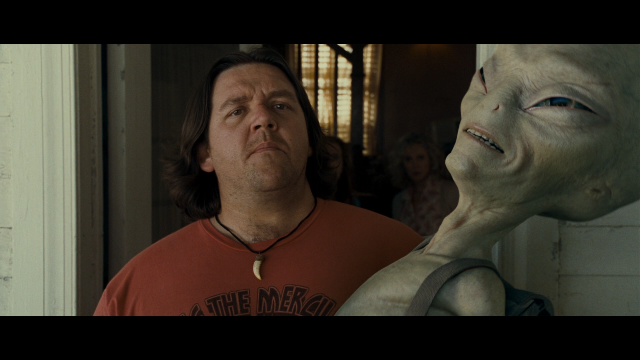 "Paul" works toward a combustible climax with various enemies out to nab the alien before he reaches his iconic rendezvous point, speeding toward an unexpected climax of confrontation, not overt comedic accentuation. Pegg and Frost have faith in their plot, and that dedication keeps the film engaging and unpredictable, even while it lovingly pilfers from some of the most famous sci-fi blockbusters around. 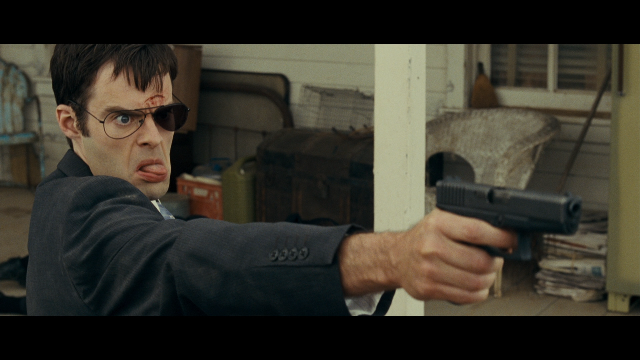