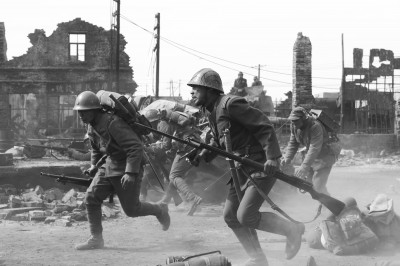 Please Note: The images used here are promotional stills provided by Kino Lorber and are not taken from the Blu-ray edition under review.

The reason that the brutal Japanese invasion of the Chinese city of Nanking in 1937 (during the Sino-Japanese war) is referred to as "the rape of Nanking" becomes abundantly clear in Lu Chuan's City of Life and Death, a historical epic that takes us directly into the horror and dehumanization experienced not only by Nanking's inhabitants, but also by the Japanese soldiers inflicting it, who, as depicted by the film, are only small, subservient, and brainwashed parts of a political system and military culture in which decisions are made on high and handed down a chain of command (and woe be to the one who dares question the inevitability of carrying out their part). Though the film is mainly an attempt to capture this all-consuming, multifaceted atrocity on as large a canvas as possible, Lu wants to show it to us from multiple angles, and he thus tries to weave a few threads of individual humanity and personally felt experience into an historical tapestry depicting a moment that trapped hundreds of thousands of unfortunate people (many of them innocent civilians) in its crosshairs.

The film's structure, then, is like an amazingly choreographed historical pageant that more often than not views the battles, massacres, and mass rapes from far up and/or far back, taking longish pauses from that overarching big picture to focus in on a few individuals and their roles in the disastrous events. These include Kadokawa (Hideo Nakaizumi), a young, naive Japanese soldier who tries to hold on to some semblance of his natural empathic humanity in the midst of the increasingly heedless violence that surrounds him. Kadokawa tenderheartedly falls in love with a Chinese prostitute, Xiaojiang (Jiang Yiyan), to whom he belatedly loses his virginity, and who is a tough cookie with a heart of gold. When the women sheltered in the city's very tenuous, ever-shrinking "Safety Zone" (under the protection of German businessman John Rabe (John Paisley) and his lackey Mr. Tang (Wei Fan), a bureaucrat who becomes another character we get to know, and whose mettle will be tested by the film's horrific events) are forced to cut their hair to become less attractive targets for the increasing, literally rapacious Japanese incursions into the Safety Zone, Xiaojiang refuses; and when 100 Chinese women from the Safety Zone are requisitioned by the Japanese to provide "comfort," she heroically volunteers herself in order to spare one of the more sheltered women from the brutality through which she will ultimately be killed. Meanwhile, the Japanese are on an obsessive mission to weed out and execute any remaining pockets of Chinese resistance, such as that headed up by Lu (Liu Ye), an officer determined to fight to the death and never surrender, who has taken a criminally young, prepubescent-looking boy soldier, Xiaodouzi (Bin Liu), under his wing. The fates of Kadokawa and this little boy are through-lines in the film's action that stretch up to the concluding sequence, when they are drawn together for a final face-off between innocent love and respect for life, and the murderous mandates of war--a conflict that at this moment reaches its peak not only between the traumatized, hardened Kadokawa and the still hopeful Xiaodouzi but, even more profoundly, within Kadokawa, who is torn between his humane impulses and his loyalty, and emotionally buckling under the weight of what he has seen and done during the rape of Nanking.

All of these characters and their stories are, unfortunately, rather subsumed by the film's awe-inspiring, nonstop set pieces, which are in their turn somewhat troubling for being so beautifully, symmetrically shot and expertly edited. This creates a double layer of problems that keeps the film grounded in wonderfully-made-but-not-great territory. First, the one-on-one or small-group interactions between characters are often imprecise, conventional. They are blunted by a technical dynamism and dramatic over-broadness that one guesses is Lu's itchiness to demonstrate his technical prowess (which is, indeed, impressive; unlike your blender-editing Michael Bays and Paul Greengrasses, he knows how to make cinematic action soar and sing by leaving it intact) making itself felt. What is lacking are overriding any subtler or more restrained instincts that might have left in the necessary intimacy and rawness that the film needed to allow these sections to really move us instead of falling back into conventional "dramatic moments" that the uniformly fine actors must do their best to bring to life. (They sometimes succeed, though not much can be done to redeem the film's inexplicably sappy final moments.)

Compounding our attention being directed away from the film's individualized human beings in this way is what it is directed toward instead: ferocious, huge-scale scenes of military action and slaughter that, while explicit in their violence, could never be graphic enough to override their sheer beauty. Camera and crowds are choreographed so astoundingly well by Lu (with gorgeous black-and-white cinematography by Cao Yu) that you will never forget, for one example, the way people in a crowd that is being fired into appear, in a very wide shot, to fall like rows of dominoes; or, for another, the transfixing oil-and-water look of the different-colored Japanese and Chinese uniforms clashing together in chaotic splendor as the two armies meet in the film's opening battle. But what makes those images unforgettable is finally disconnected from their scenes' purported content, raising the question of what kind of content is best fitted to such aestheticization, and what kind might demand something more finely attuned to what is being depicted.* There is no way to not recommend City of Life and Death; it is an aesthetic experience and a demonstration of craft that no-one who loves movies will want to miss. But when it comes to the events the film is trying to re-create, that aesthetic brilliance becomes a limiting curse as well as a creatively empowering blessing, and we're left with the feeling that its undeniable power is frustratingly incapable of penetrating beyond just our eyes and ears, when the kind of suffering and inhumanity we see onscreen should have been able to reach further, deeper, to our hearts and minds.

*For an example of an equally, if differently, beautiful cinematic experience in which aesthetics and content are much better, and much more harrowingly, matched, see Russian filmmaker Elem Klimov's great war film from 1985, Come and See. 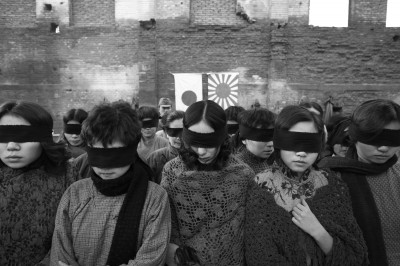 
Cao Yu's black-and-white cinematography looks fantastic on this near-perfect transfer. Every nuance of the images is entirely intact (no flickering of whites, no mottling of the sharp and solid blacks), and the overall visual experience afforded by the meticulous AVC/MPEG-4, 1080p, 2.35:1 aspect ratio anamorphic-widescreen transfer is exquisite.


The DTS-HD Master Audio 5.1 soundtrack delivers the film's huge, epic battle scenes, which are full of explosions, gunfire, etc., with a rumbling intensity that puts you directly in the middle of the action, all clear as a bell and loud without ever pushing into distortion or level imbalances. This is a disc that sounds as good as it looks, which is very, very good indeed.


Alongside the Blu-ray disc (which features the trailer for the film in addition to those for several other Kino Lorber titles), Kino has included a standard-definition DVD containing a feature-length making-of, Matters of Life and Death, a roughly shot (full-frame, digital video) yet completely fascinating, truly behind-the-scenes, warts-and-all look at a film that would have been prohibitively expensive, complicated, and difficult to shoot in any context, let alone that of China's film industry, with its tougher economic stringencies and endless bureaucratic/government-related exigencies. Even the cast and crew interviews are much more frank than most back-patting featurettes; director Lu Chuan and his co-producers discuss potentially embarrassing details about the difficulties of getting funding and keeping the crew happy, and the actors confess to experiencing real trauma under Lu's ultra-realist, sometimes real-time shooting conditions (which is borne out by the plentiful on-set production footage), causing them to never want to work on another war film. This is one of the best kinds of bonus feature--an entire additional movie that expands upon the main film by getting us in close to the people, conditions, and creative/production processes it came out of. 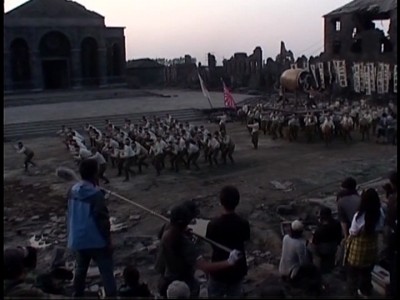 
An unmissable cinematic event on the aesthetic level, City of Life and Death leaves too much to be desired on the smaller-scale, emotional, human plane it also tries to inhabit to consider it any sort of great, unqualified classic. What should move or traumatize us in the film feels too derivative, broad in its conception, and muted by the overriding, exhilarating formal symmetry of director Lu Chuan's very cinematic vision to have any effect of appropriate significance. However, though it may stop short at only being breathtaking when it should have fought harder for a bit more substance and subtlety, City of Life and Death is ambitious and accomplished enough, and does achieve such an outstanding degree of visual and aural creativity and passion, that it must be Recommended, if only for its rare, exceptional beauty.