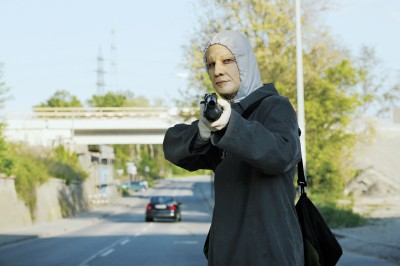 Please Note: The images used here are promotional stills provided by Kino Lorber and are not taken from the Blu-ray edition under review.

Johan (Andreas Lust, Revanche) runs, and that is the action that defines him completely; his other occupation, robbing banks, is only a subset, an offshoot of that raison d'être. At the beginning of The Robber--a film directed by Benjamin Heisenberg and based on a true-story novelization by Martin Prinz--his parole officer (Markus Schleinzer, The White Ribbon) tells him that he likely will not be able to earn a living by running, but, as Johan belatedly retorts after failing to follow through on meager work-release job "opportunities," a regular job doesn't fit with his training schedule, which to him means it's out of the question. Johan exists for the sole purpose of remaining an object in motion, and, though he is fighting an uphill battle against a system and a society that coercively demand stasis, it's either them or him; he won't stop until he is forced to a halt against his will and with no other choice. 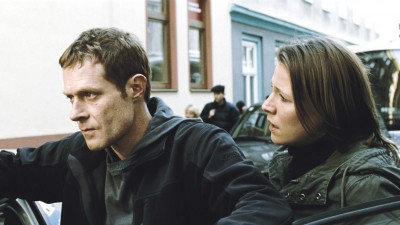 We are introduced to Johan just as he's wrapping up a six-year prison sentence for armed robbery, during which he has never ceased to run, albeit only in circles around the prison yard or going nowhere on a treadmill in his tiny cell. He is warned to go straight by that solicitous, bourgeois-bureaucrat parole officer, who implies that his running and his robbing go hand in hand (which, indeed, they do; it's just that Johan has a much more positive take on that fact), and that he should focus on reintegrating himself into society through career, family, and/or other ordinary commitments. But prison was just an extended interruption in the immutable run-and-rob flow of Johan's life, and he resumes his old routine immediately upon his release, even as he wins the admiration of the straight world (not to mention some hefty cash prizes) by unexpectedly becoming a marathon-winning hero and champion. 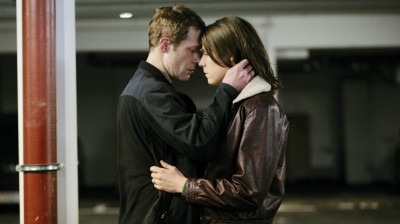 The only glitch inhibiting Johan's achievement of truly perpetual motion, the only legitimate distraction, is the love he feels toward Erika (Franziska Weisz), a young woman he apparently knew (and perhaps was more than acquainted with) before he was locked up, and with whom he reconnects by chance while desultorily attending to his post-release legal and occupational obligations. They become roommates, then friends, and then, inevitably, lovers--until Erika discovers that the masked robber in the papers and on the news is the recidivistic Johan. She tells him to leave, feeling betrayed; but she has her own moment of traitorousness when she is questioned by the police about her just-departed lover, at whose hands that too-persistently nagging and scolding parole officer has learned that any sense Johan might have that you mean to impede his ability to keep moving is likely to result in violence. 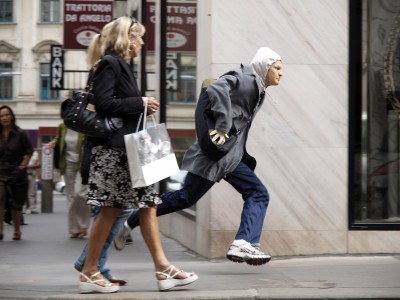 What follows, in the film's final third, is a game of cat-and-mouse between Johan and the police that plays out with almost no dialogue, only action, in scenes full of tension as Johan leads his pursuers from a suburban nature preserve out onto the highways in a beautifully shot and edited chase sequence that is extended to the point of abstraction and achieves its irresistible propulsion not with any assaultive editing or slick shaky-camera routines, but through carefully choreographed, prolonged camera movement, judicious editing, and cinematographer Reinhold Vorschneider's wintry, precise compositions. Tellingly, Heisenberg (who also edited the picture) and Vorschneider render the robberies economically, as incidental, somewhat truncated extensions of Johan's need for a speed that he can create through the exertion of his body. The filmmakers' focus is first and foremost on their protagonist's movement, and the camera soars along exhilaratingly as his body in motion cuts a clean line through the film's anonymous middle-class suburban world, where the mediocrity synonymous with the static life everyone wants to push on him reigns. (The tunes that blast from every car radio are grotesquely mindless, cookie-cutter pop, but a run up a mountainside in the morning sunlight is accompanied on the soundtrack by a stately, achingly beautiful aria.) We glide along with Johan as he goes until he can go no more, and the film's rigorously maintained anti-psychological modus operandi--its resolute resistance to offering up in an obvious way any character background, history, or motivation--works just fine, because we don't need any explanations about the impossible freedom that drives him; The Robber's relentless but graceful movement lets us feel it.


The Robber is rife with nighttime/dusk/dawn exteriors and very dark interiors, but those blacks stay strong and solid, as does all of the rest of the film's muted palette (with the occasional warmer lamp- or sunlight) in this magnificent, impeccable AVC-encoded, 1080p-mastered, 2.35:1 anamorphic widescreen transfer.


The DTS-HD Master Audio 5.1 soundtrack offers room-filling sound for the more sonically dense scenes, and delivers everything from the most hushed, intimate dialogue and ambient- sound-scored silences to loud gunshots, car motors, and Lorenz Dangel's sparingly used, minimalist, martial-rhythmic drum score with crystal clarity, never overwhelming to the point of distortion or creating anything but the fullest, deepest, most immediate aural environment.


Just the film's theatrical trailer, a gallery of 24 stills, and several trailers for other Kino Lorber releases.


The Robber blows through your eyes and ears like a waft of cool, elegant existentialist air; it's one of those lean, pared-down action thrillers that allow themselves room for contemplative, measured pacing, a philosophical distance, and a sense of the physical properties of the film--the light, the texture, the space of the settings--all of which is more seductive than aggressive. This is the aesthetic approach that the great Jean-Pierre Melville (Le Samouräi, Le Cercle Rouge) was a master of, and that modern audiences seem to have a love-hate relationship with. (Think of the concurrent critical veneration and word-of-mouth dubiousness toward Anton Corbijn's The American or David Fincher's Zodiac, films that, though hardly interchangeable with it, do share a tonal temperature with The Robber). The Robber is not quite up to the near-ascetic, stone-faced, truly ultimate cool of Melville's best, but it is quite a worthy addition to that same tradition (which stretches back, from the aforementioned Fincher and Corbijn films through Melville, The French Connection, and Pakula's films of the '70s, all the way to the great film noirs) of stoical, finely sublimated cinematic passion. Highly Recommended.