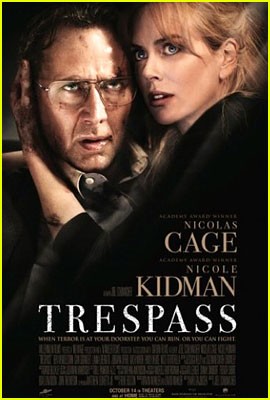 As a thriller, Trespass is unbelievably lazy and awful, but as a comedy, the film kind of works. Joel Schumacher directs Nicole Kidman and a hysterical Nicolas Cage in this home-invasion drama so full of stupid that I cannot imagine a single member of the cast showed up to work under the delusion that they were making a serious movie. Cage flip-flops between looking bored and looking like he is purposely lampooning the script, and Kidman's tears can only help so much. Lacking thrills or believable drama, Trespass is laughably bad.

Trespass begins with a sustained shot of diamond dealer Kyle Miller (Cage) shouting into this cell phone while driving his Porsche up a winding road. Cage speaks too quickly to convince the audience that he is actually conversing with someone on the line, and this poor planning is a precursor to the misery ahead. Inside his fortified mansion, Kyle greets wife Sarah (Kidman) and daughter Avery (Liana Liberato) without putting down his phone. Kyle then locks himself in his office and peruses the contents of a shady briefcase. In less than five minutes the character of Kyle is completely fleshed out as an absent husband and father and shady businessman.

After Avery sneaks out to a party, four masked gunmen force their way into the home and start demanding money and diamonds from Kyle, who decides to assume the role of Billy Badass and play hardball. Avery does not miss much of the fun, as she returns home via cab after tiring of a would-be suitor's frat-house courtship. The next hour or so is full of screaming, falling on the floor and firearm waving. A sample of the stellar dialogue:


After watching Trespass I'm still not completely clear on the motive for the break-in. A lot of red-herring theories are tossed around, but I think the main concern is the money the trespassers assume Kyle has. The dastardly group is comprised of leader Elias (Ben Mendelsohn), his younger brother Jonah (Cam Gigandet), a huge thrasher named Ty (Dash Mihok), and Elias' junkie girlfriend Petal (Jordana Spiro). Home-invasion clichés abound in Trespass, so Jonah obviously installed the home's alarm system and did or did not have an affair with Sarah.

This review is becoming rather flippant, so I'll rein it in a bit. Schumacher has made some awful movies (Batman & Robin, Twelve), but he also directed excellent thrillers Phone Booth and Falling Down, solid war drama Tigerland and an elaborate adaptation of The Phantom of the Opera. Cage previously worked with the director on 8MM, and Kidman says in the disc's making-of featurette that she has known Schumacher for years. I guess the friendships paid off for him, because the stars signed on for this mess of a movie. Chief among the film's flaws is the complete lack of tension. I expected someone to get killed or at least badly injured early on, but the villains mostly just scream at the Millers. Kyle ignores all the instructions he is given, but he survives most of the movie without a scratch.

Cage consistently delivers crazy and exciting performances, and his work here is definitely interesting. The actor looks bored during half of the film, but seems to purposely go for the stupidest possible line delivery in other scenes. I guess Cage wanted to keep himself engaged, and he tries yelling, sputtering and slurring his words at various points during the film. Poor Kidman seems like she is trying for much of Trespass, but the script restricts her actions to those least helpful in the situation. Sasha Grey look-alike Liberato does well enough, though her role is mostly uninteresting.

The stupidity of Trespass is on full display when a private security company's phone operator allows Avery, who is being held at gunpoint, to convince her to cancel a police car dispatched after a window is broken. Avery is literally gasping and crying during this call, but the woman buys her excuse that she is having a party. There is neither tension nor anything remotely resembling a good story to be found in Trespass. If unintentional laughs are your thing, this one's ripe for the picking.

The 2.40:1/1080p/AVC-encoded transfer for Trespass is confined to a single-layer disc. Schumacher at least makes the film look good, and the Millers' modern mansion is full of sleek glass, marble and polished wood. The Blu-ray mostly supports these details, and the image shows decent depth and texture. Image detail is OK, and some shots have a slightly soft, blurry appearance. Skin tones are natural, colors are bold and well saturated, and blacks are inky, though I noticed varying degrees of crush during nighttime scenes. Minor aliasing occurs during the first few minutes of the film, but I noticed no issues with edge enhancement, digital noise reduction or compression artifacts.

The film's 5.1 Dolby TrueHD soundtrack handles the ridiculous dialogue with ease, but lacks the punch I expected during chaotic scenes. Ambient noise and directional effects do roll into the surround speakers, but the track as a whole is front-loaded. The LFE is not especially active, and the surrounds lay dormant during much of the film. The track's range is quite good until it dives into the lower sonic depths, at which point it backs away from full power. English SDH and Spanish subtitles are available.

Aside from some bonus previews, the only extra is Trespass: Inside the Thriller (5:07/HD), which only proves that it takes a ton of people to make a bad movie.

I can see how an interactive viewing of Trespass where audience members yell back at the actors and throw popcorn at the screen might be fun, but the film fails as a home-invasion thriller. Director Joel Schumacher continues his downward slide and shows no signs of life while directing a too-serious Nicole Kidman and a hysterical Nicolas Cage. I really hope you will Skip It.