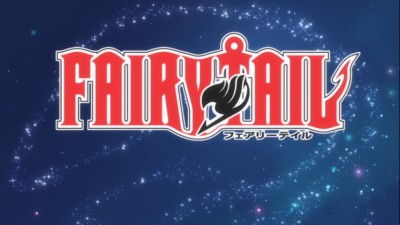 Fairy Tail is a popular anime series that has been airing in Japan long enough for over 100 episodes to have been produced and aired (already) since its debut episode in October '09. The series is based upon the successful manga series created by Hiro Mashima. The story has an entirely unique combination of quirky science-fiction, fantasy, and an abundance of humor that seems to consistently keep things interesting. This action-packed series focuses on a guild made up of extremely powerful wizards. The primary guild of the series is known as the Fairy Tail guild (big surprise there!) and the heroes that make up the band of quirky magicians seem nothing like that which might be initially expected: they are all goofy, well-spirited, and willing to work together as truly necessary to complete a mission successfully.

The characters on the show are a central reason as to why the series manages to work quite so well. The main storyline seems somewhat slow to develop so it's the character element that helps to grab the audience attention the most. The characters consist largely of a fire-breathing dragon man, a blue cat, and a girl who collects magical beings through portkeys that help unleash the strong spirit energy. The group seems to get along fairly well (pun is intended) and they all contribute something to the adventures being so humorous, exciting, and downright thrilling. The story picks up about halfway through this first set and the last several episodes are poised to make many fans feel confident the ride is well worth taking. 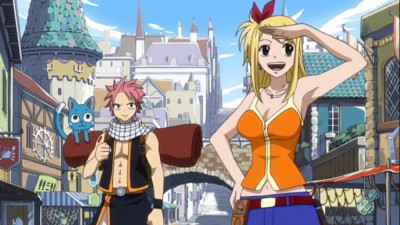 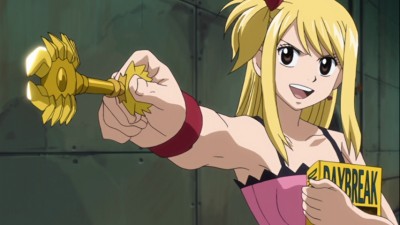 The best thing about this series -- and I mean this as an absolute compliment -- is that it is a ton of fun. It isn't the most complicated of series (at least on this initial collection) but the cast of fun characters and offbeat situations makes it an easy show to enjoy without having to over-think it. The premise is enjoyable and the execution of the creative elements works effectively so it isn't surprising that the series has been able to find popularity and appeal in Japan thus far... Fairy Tail is a winning combination of some of anime's finest genre aspects.

The biggest drawback to this introductory set of episodes is that there is only enough time to start to feel accustomed to the characters, storyline, and stylistic approach, rather than to understand the foundations of the series entirely. Perhaps that can be considered a pro and con to the show as it keeps things interesting by keeping the audience expectations in an unexpectedly unsure state. What will happen next? One can't help but feel compelled to immediately begin the next set of episodes and Funimation seems to recognize that aspect wisely by choosing to release the show with short gaps between the planned DVD releases. By the end of the twelfth episode things are also accelerating in the story but won't be fully resolved by the end of the first set so most viewers who end up digging the show will have an unusually enthusiastic level of interest to see where the series will head to. Be prepared.

This is a promising show with a lot of intrigue in these first 12 episodes. This isn't exactly a groundbreaking series but it is an effectively made one that promises to entertain for the entire run should it continue to stay as consistently well-made and simplistic, yet entirely  joyous - through to the somewhere-bound-to-arrive eventual story conclusion (whenever that may distantly arrive). Give Fairy Tail a chance and maybe it will be one of the better anime series to be discovered this year; It's that enjoyable and certainly worthy of being checked out by anime fans who want to see something FUN, solid in animation, and with notable music and genuine spirit. 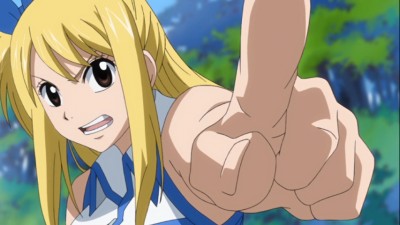 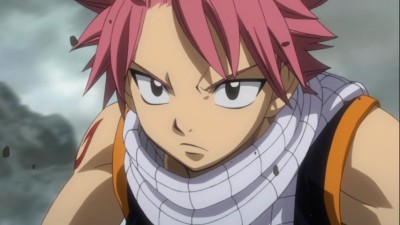 Fairy Tail is presented in a combo pack release which contains both DVD and Blu-ray discs. The Blu-ray presentation is an upscaled 1080p transfer that presents the series with strong, bold colors and good line detail. The transfer is somewhat soft because of the nature of an upscale presentation. These episodes were originally animated to be presented in Standard Definition yet Funimation has done an excellent job with this upscaled release as it does in fact deliver a solid presentation in the original broadcast aspect ratio of 1.78:1 widescreen.

Fans are treated to two lossless audio options (which are both encoded as Dobly TrueHD tracks). English 5.1 surround sound provides a slightly more enveloping aural experience with better use of sound effects and music reproduction, while the 2.0 original Japanese language dub is relegated to having a slightly less expansive soundstage. Both dubs are well produced but I'll admit to having a preference for the original Japanese language as characters were voiced with a slightly better degree of seriousness and subtlety over the nonstop silliness on display in the English dub version.

The extras include commentaries on 2 episodes with members of the English voice cast; clean opening/ending credits, and trailers for additional Funimation releases on DVD/Blu-ray. The included commentaries are uninteresting and lack cohesive details for the series fans and are more prone to being merely goofy recordings featuring unfocused comments. 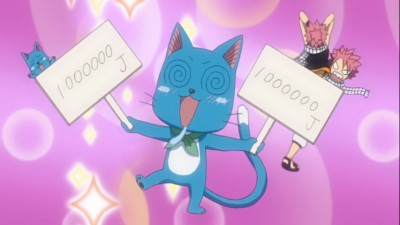 Fairy Tail is a blast of energetic fun that keeps on delivering episode after episode. It isn't the most original series in premise or execution but it delivers strong entertainment in the best way possible: by demonstrating the power of unbelievably high energy awesomeness.