Kino // Unrated // November 22, 2011
List Price: $34.95 [Buy now and save at Amazon]
Review by Stuart Galbraith IV | posted December 1, 2011 | E-mail the Author
First, a story: One of my most memorable movie watching experiences occurred about 20 years ago, when I was living in Ann Arbor, Michigan. I was writing about movies for the local paper, and ended up interviewing film-music historian Gillian Anderson (not the X-Files actress), who was preparing to conduct a full orchestra and choir accompanying D. W. Griffith's reconstructed masterpiece Intolerance (1916). At the end of the interview Ms. Anderson encouraged me to see it, saying tickets would be waiting for me at the box office.

But much as I adore movies and respect silent cinema, I confess I was pretty apprehensive. I'd seen excerpts and a much shorter cut of Intolerance before. The reconstructed version was three-and-a-half hours long, and the Michigan Theater didn't exactly have the most comfortable seats, if you catch my drift. Nevertheless, I felt obligated to go. To my surprise the 1,700-seat theater had not only sold out, but SRO moviegoers were cramming the aisles. And then the theater lights dimmed.

The thing you have to understand about Intolerance is that it tells four separate but parallel stories: a modern crime story, an account of the St. Bartholomew's Day Massacre, the fall of Babylon, and the Christ story. In the reconstructed version, Griffith cuts among them, slowly at first but, gradually, the cutting gets faster and faster. They become intertwined and, by the last 20 minutes of the film, the audience I saw Intolerance with was completely swept up in the film. To everyone's surprise, the picture had become almost unbearably tense and, although I must be wrong about this, my memory was that the entire audience rose en masse for the last five or six minutes, so palpable was the excitement. If that wasn't literally true it sure felt like it that evening.

The point of this story, I guess, is to acknowledge that even silent films nearly a hundred years old still have the power to move audiences just as they did when they were new. Griffith was a master manipulator, the "Father of Film," as Kevin Brownlow's great television documentary calls him. Way Down East (1920) was Griffith's last great success, and while lacking the scale of Birth of a Nation and Intolerance, is similarly affecting.

A big part of the reason is the star of the film, Lillian Gish. She learned early how to play to the camera, and her performance in this, like her work in Griffith's Broken Blossoms (1919) and Orphans of a Storm (1921), Victor Sjöström's The Wind (1928), and Charles Laughton's Night of the Hunter (1955) rank among the best film acting ever done.

Kino's Blu-ray of Way Down East is derived from the Museum of Modern Art's 35mm restoration, complete with the original color tinting. Actually, this 149-minute version is more A Star Is Born-type reconstruction. Short bits and pieces of the film remain missing. Still photographs and/or inter-title descriptions and dialogue take the place of this missing footage. The transfer seems cobbled together from a variety of sources. Sometimes even within a single scene the footage will vary from pristine to severely worn and damaged, including much nitrate stock decomposition, but overall the picture looks very good, considering. A few extras round out the disc. 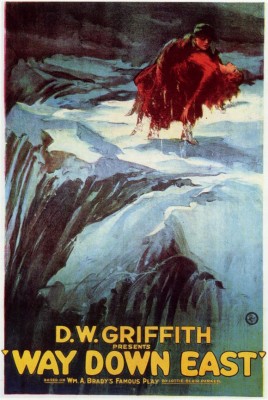 Griffith's film adapts Lottie Blair Parker's 19th century play 'Way Down East (note the apostrophe), which had been wildly popular around the turn of the century but which was considered old hat even by 1920. Photographs from the stage version, included as an extra feature, resemble the film pretty closely, but the iconic ice floes climax was Griffith invention, insofar as he clearly "borrowed" it from Harriet Beecher Stowe's Uncle Tom's Cabin. (Reader Sergei Hasenecz adds, "Actually Stowe's novel tells of the chase across the ice in a mere six sentences. When the novel became a stage play, this scene was expanded and dramatized, receiving the full stagecraft effects of the time, complete with 'ice' and pursuing slavers with their baying hounds. The play and this scene in particular were so popular, leading eventually to parody and cliché, with New York audiences that it became standard for any performance anywhere of Uncle Tom's Cabin. Touring "Tom shows," as they were called, were ubiquitous well into the 20th century. Griffith surely saw and was inspired by such a staging, rather than by Stowe's novel.")

Simple country girl Anna Moore (Gish) travels to Boston hoping to borrow some money for her aging mother from wealthy, snobbish relatives. There she meets rich playboy Lennox Sanderson (Lowell Sherman), a sexual predator who tricks Anna into a sham wedding in order to bed her. Naively believing herself to be married, her joy is soon crushed when the truth is revealed, and she has his child out of wedlock.

However, as it turns out Sanderson's estate is nearby and, his immoral lust now turned toward Kate, he demands Anna leave at once.

The picture has been described as melodrama, and I suppose by definition it is. But Griffith's direction and especially Gish's performance raise it to another level entirely. Her overpowering performance has emotional truth written all over it. Gish's wonderfully expressive eyes especially have an intensity that almost reaches through the screen. In Brownlow's documentary on Griffith, Gish tells an amusing, revealing story about shooting the climatic scene in Broken Blossoms where, trapped in a closet her character realizes that her enraged father will beat her to death as soon as he can break through the door. Gish played the scene like a trapped, terrified animal, and a visiting newspaper reporter, overcome by what he had just seen, vomited in response.

Much of that truthfulness is on display in Way Down East, particularly Anna's desperate effort to baptize her dying baby. Are there eyes in all of cinema more expressive?

Except for the elaborate ice floes rescue-climax, astounding even now because so little of it was faked (Gish herself suffered permanent physical injuries) and, obviously, none of it with CGI technology, the film is beautifully photographed (by Billy Bitzer) but not particularly showy. Even so, the screen rights alone cost more than all of Birth of a Nation. At $700,000 it was one of the most expensive films ever made up to that time, but it was also a huge success.

It's old-fashioned and progressive at once, with much moralizing from Griffith that's far outweighed by a subject matter that could not have been told this frankly, this honestly, after the Production Code was enforced. Of course women have been treated this shabbily and worse, but Anna's helplessness and eventual fury at Sanderson's selfishness approaches a kind of proto-feminism. Peripheral, comical characters in relief scenes may be antecedents of Ma & Pa Kettle, but Anna and David especially are richly-developed, fully-formed characters.

For reasons detailed above, Way Down East is a pleasure to watch in 1920 x 1080p high-definition even if the picture is cobbled together from a wide range of sources. The tinting adds enormously to the film moods and atmospheres, and the carefully considered orchestral score, by the Mont Alto Motion Picture Orchestra, presented in 2.0 stereo and 5.1 DTS-HD Master Audio, is excellent. Inter-titles are in English, obviously, with no other language options.

Supplements include an extensive gallery, including an original program from the film as well as a stage production. Also included are text notes about the original play and photographs from that version, along with a funny excerpt from a 1903 Thomas Edison version of Uncle Tom's Cabin, demonstrating how far advanced Griffith's climax must have seemed to audiences weaned on stuff like this.

This is a must-see, a powerful film that still works its magic 91 years after it was made, and if you can't see this in a theater with a live orchestra, Kino's new Blu-ray is the way to watch it. A DVD Talk Collector Series title.