Sigmund & The Sea Monsters: Season One

Other // Unrated // September 6, 2011
List Price: $29.93 [Buy now and save at Amazon]
Review by Kurt Dahlke | posted August 31, 2011 | E-mail the Author
Sigmund and the Sea Monsters Season One:
Shellevision; are you ready for it? That's what the sea monsters watch after a hard day at work scaring humans, and if you grew up in the 1970s, chances are you watched a fair amount of shellevision too, with Sigmund, Blurp and Slurp. Those are the Brothers Sea Monster, of course, who, along with Sweet Mama and Big Daddy make sure that not-scary Sigmund is kicked out of the sea cave. Conveniently, the brothers Stuart pick up Sigmund; Johnny (Johnny Whitaker) and Scott, (Scott C. Kolden) who live just down the beach with their maid or something. Taking a shine to Sigmund, the Stuart boys ensconce him in their awesome clubhouse, spending two seasons hiding Sigmund from everybody.

If that sounds ludicrous, it's because it is ludicrous, the kind of crackpot kids' show that only Sid & Marty Krofft could concoct. Never rising above the narrative quality of a Bazooka Joe comic strip, Sigmund and the Sea Monsters is simplistic, shrill and surreal. Obviously, kids love such stuff, proving that the Kroffts were right on the money, and so profound were the effects of Sid & Marty Krofft shows that Gen-X-ers such as myself will spend their days amassing digital copies of all their shows, even if they can barely stomach them now. 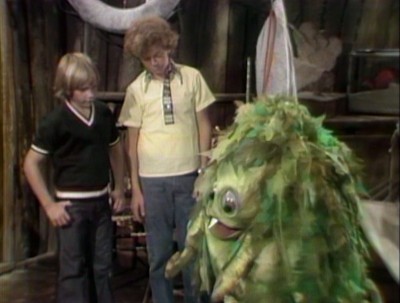 Though with sights clearly set on kids, it does seem that writers occasionally lobbed a joke or two at the adults they knew would be watching. Consider this zinger from episode two: as Blurp and Slurp argue over what to watch on shellevision, one of them mentions the monster movie titled The She Creature Eats the Banana Monster. Am I just a pervert, or was that joke intended for your 17-year-old brother? One thing that's not clear is whether the show's sets were meant to be as real as possible on a budget, or as surreal as possible for said 17-year-old. I always wondered, for instance, why exteriors at the Stuart house always look as if a hurricane is approaching? That wonder never extended much further though, as somehow those polyester and foam sea monster costumes always seemed completely plausible. Part of me knew there were actors in there flapping those tentacles, yet I bought into it completely.

I guess it's because Sigmund is crafted so completely and sincerely from the things a young boy is fascinated by. The mere thought of living in that cool clubhouse is like an elixir to those meant to identify with the character of Sigmund - a pretty lovable guy after all. More so (at least for me) is the overriding drama dragged out of Sigmund's constant fear of being discovered, caught out for being somewhere, and being something he's not supposed to be. The tragedy of Sigmund is how the character comes from an abusive family (just callin' 'em as I see 'em) and as a condition of his salvation, he's never allowed to get what he wants from life. He can't walk outside, he can't win singing contests, he can't do anything! Tell me there aren't kids who can't relate to those feelings, who don't live them every day. 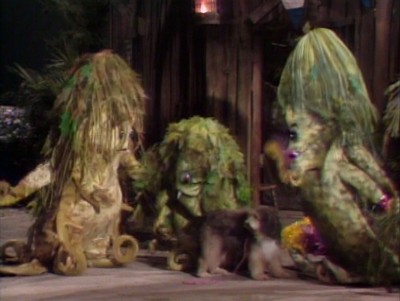 And, there's the stupidity, since they try to wring at least three big laughs per episode from Blurp and Slurp running into each other and falling down. Which leads to another one of the show's off charms; the omnipresent, overloud presence of a laugh track - probably helps for the kids, but kills it for adults. Oft-horrific scoring features overly flanged synthesizers and guitars - another annoyance - as is the misguided attempt to turn Johnny Whitaker into a pop star ala David Cassidy. No doubt Whitaker could have developed the voice to carry off what he was clearly quite enthusiastic about, and the songs are nothing if not catchy. They're also shrill and manic, while stopping each episode cold with a little barely-congruous music video.

I'll list the episodes from Sigmund and the Sea Monsters Season One but it's almost beside the point to describe what happens in each. As with other Sid & Marty Krofft series, Sigmund is fondly remembered and fetishized, though we as adults can't really figure out what's good about - or need to understand - what's happening. Sigmund falls in love with a dog: what's that about? Yet we all have our memories about some profoundly weird element from one episode or another. For me, it's the bit in Land of the Lost wherein Will and Holly fall into some hole or something and end up revolving around what looks like a giant glowing ball of tinfoil in the center of the Earth. I hope you find your element in this three-disk set of morally ambiguous nostalgia.

The Monster Who Came to Dinner - Sigmund winds up in Johnny and Scott's care after getting his ass kicked out of the cave. He's almost discovered by Zelda and the Sheriff.
Puppy Love - Sigmund falls into romantic love with a dog. Nobody wants to think too much about it. Slurp tries to lure Sigmund home by dressing as a starlet. He's also almost discovered by Zelda.
Frankenstein Drops In - When Scott is kidnapped by the Ooze family, Johnny tries to out-scare them to get his brother back.
Is There a Doctor in the Cave? - Sigmund falls ill, and Johnny goes on a search for medicine, which can only mean that the Wolfman will show up.
Happy Birthdaze - Sigmund seems like a good birthday present for Big Daddy, but the Ooze brothers steal presents meant for the Sheriff, too.
The Nasty Nephew - The horrible Leroy - Zelda's nephew - spends a weekend. Sigmund is probably almost discovered.
Monster Rock Festival - Sigmund's family is in the lurch when he won't help them win a rock contest. But when Sigmund himself wins the contest, he's almost discovered.
Ghoul School Days - Sigmund's brothers hate school, trying then to trick Sigmund to take their place. How in the hell is that supposed to work?
The Curfew Shall Ring Tonight - Sigmund breaks curfew, winding up in trouble with The Law, which everyone knows is a great way to almost be discovered.
Sweet Mama Redecorates - The Oozes boost Zelda's furniture in order to redecorate the cave. It's almost like they want to be discovered.
Make Room for Big Daddy - Blurp and Slurp break the shellevision and run to hide out in the clubhouse. When Big Daddy finds them he decides he doesn't want to leave.
It's Your Move - A coming storm forces the Ooze family to move from the cave, and into the realm of possible discovery.
Trick or Treat - Sigmund goes door to door for candy. No way he could almost be discovered this time.
Uncle Siggy Swings - Sigmund's cleverly named Uncle comes for a visit (who wouldn't?) He stays for Zelda.
The Dinosaur Show - The Ooze family probably doesn't have much to fear when a caveman wants to kick it in their ... cave.
The Wild Weekend - Johnny and Scott run into H.R. Pufnstuf actor Jack Wild. Things get really complicated when the Ooze family's lobster, Prince, runs away from home.
Boy for a Day - Not even done with the first season, and already the amnesia plot is called to duty, meaning Sigmund forgets that he isn't a sea monster, but thinks he's a boy. If that isn't a recipe for almost getting discovered, I don't know what is!

So here it is, Season One of Sigmund and the Sea Monsters in all its seaweed-y glory. As an out-of-print item, this three-disk set in a standard keepcase with a two-sided flipper, is sure to be met with anticipation from those who ate an entire box of sugar cereal in one sitting on a Saturday morning, just to find the prize. It's as harsh as ever, with a cheap, shot-on-video look, overdriven audio, and plots that hinge on really crap looking sea monsters yelling and knocking each other over with pathetic tentacles. As such, it's a precious gem from childhood, to be screened whenever those days seem better than these.

Video:
All 17 Episodes are presented in their fullscreen OAR of 1.33:1. I reckon they look about as good as possible considering the source. The most obvious curiosity I encountered is a thin pinkish line appearing occasionally on the outside left edge of the picture, as if the digital image is framed just a little off. Otherwise, encoding handles the frequently poor quality video as well as it can. Ultimately this means a soft, fuzzy image with not very high levels of detail. Colors look good, however, and compression artifacts otherwise are hard to spot.

Sound:
Dolby Digital Mono Audio in English is on the harsh side. Everything seems a hair overdriven, while pushing mids and trebles to make for a less-than-reference-quality listening experience. However, this sonic assault may cover up any damage to the audio tracks that you might find.

Extras:
Johnny Whitaker and Scott C. Kolden contribute semi-fun Commentary Tracks to three episodes; "The Monster Who Came to Dinner," "Make Room for Big Daddy," and "Boy for a Day." The duo seems to be watching these episodes for the first time in a while, so there is plenty of dead air as they sit back and watch. Kolden takes numerous jabs at Whitaker's poofy red hair, and other jokes are repeated for want of something more interesting to say. You get a 20 minute Interview with Johnny and Scott that is more lively than the commentary tracks. There is an 11-track MP3 Folder of Johnny's Pop Songs, and a six minute look at the H.R. Pufnstuf American Cinematheque Event in Los Angeles on November 20th, 2010, which consists of some raw autograph footage and some Q & A.

Final Thoughts:
Sigmund and the Sea Monsters, like every other Sid & Marty Krofft show, is a curious affair. Full of the mania and phantasmagoric weirdness of kids' true interior lives; the show is lovable and repellent, shrill and sweet, with tons of juvenile slapstick humor and little plot. Gen-X adults remember Sigmund fondly, but now we don't know what to do with it. Still, as it's been out of print for a while, this new issuing of the complete first season (17 half-hour episodes) of Sigmund and the Sea Monsters on three disks, is something a little special. It looks cruddy, it will stultify you if you try to watch it as an adult, and it has but a few nice extras, so it has to be Recommended, right? You know you want it, if only to force your kids to watch early some Saturday morning.