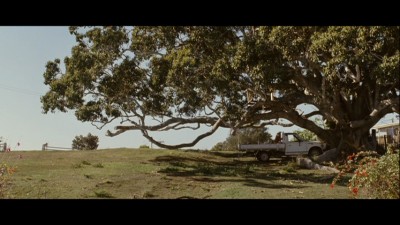 In Julie Bertuccelli's The Tree, there is an ongoing game of imagination between one of the film's central characters, eight-year-old Simone (Morgana Davies) and a playmate, in which they set themselves an age sometime in the future and verbally describe what their lives would be like as grown-up women. To say that the film itself could be one of those stories is not, unfortunately, a compliment. That's not a knock on children or childlike imaginativeness; anyone who has ever had to try to follow along as a child expresses him/herself in this way knows that the flitting-focus lack of structure, life experience, or understanding of the world can be mitigated and even made charming when it's coming from an individual child of one's acquaintance. But those qualities make for some tiresome viewing when they're present in a film like this one, which apparently means to be emotionally complex and seriously contemplative on matters like life, love, and death. 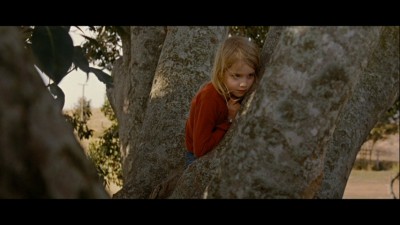 As it so often goes, it is not the story of The Tree itself that is necessarily the problem, but its execution. Simone is the next-to-youngest of four children and lives outside a small town in the Australian Outback with her family, which, near the beginning of the film, loses its father/husband to a sudden heart attack. The children's mother, Dawn (Charlotte Gainsbourg), is crippled with depression, but the family is slowly grieving its way toward some return to a routine existence when a series of events related to the giant fig tree that looms over their home begins to unfold. At first, it's not such a big deal; the tree's roots extend under their house and are causing plumbing problems and sewage backups, so Dawn gets the town's plumber, George (Martin Csokas), out to address the problem, which may be the beginning of her real return to life: she lands a job working at George's shop, and there is a definite chemistry between them.

But that's only the beginning of the problems. Simone, who was her father's favorite, becomes convinced that his spirit lingers on in the tree, and her inexplicable but strong conviction seems to rub off on Dawn, especially when further strange events--a huge branch crashing through the roof into the house and nearly injuring her and the kids, the bats that seem drawn to flock around the tree, and the cyclone that comes out of nowhere yet seems somehow related--suggest that the tree does have some supernatural-type power and significance, if not the actual reincarnated spirit of her departed husband. Simone's attachment to the tree complicates things between Dawn and George, of course, especially when George is persuading Dawn in the other direction, to cut the tree down in order to save their house. The film finally becomes about the family's struggle to escape their attachment to the tree--to leave behind the past that holds them stuck in place. 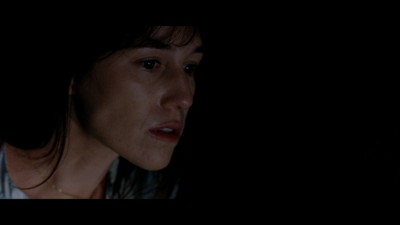 Or maybe the tree, the bats, the cyclone, even the husband's death are symbols of a nature indifferent to human concerns and needs. This uncertainty, had it been due to a cultivated, suggestive, evocative mysteriousness, would have been more than fine, butThe Tree clearly demonstrates the difference between the alluringly, intriguingly enigmatic and desultory, lackluster indecisiveness. Thematically, Bertuccelli gives the film Bergman-level philosophical, psychological, and emotional conundrums to sink its teeth into, but the visuals are prettily, timidly postcard-bland, Under the Tuscan Sun stuff. And the moment-by-moment inner workings--the structure that meanders, not as a tonal choice, but because the scenes seem to have been ordered with no sense of connection at all; the characters, dialogue, and situations that jar for how closely they hew to a TV, sitcom/Lifetime conception of the world and human emotion and behavior--are even worse. Gainsbourg struggles valiantly against the bad dialogue and clumsily conceived scenes, but far too much of what plays out between Dawn and George is often contrived, superficial, meet-cute stuff from the world of Nora Ephron, which would not be such a problem if this film weren't working in a self-conscious, magic-realist vein badly suited to such conventions. Morgana Davies seems to have been cast because of her young-Drew-Barrymore lisp and grave, grown-up features, but in my experience, precocious and "adorable" little smart-alecky angel characters like Simone are based not on life, but on popular films and TV. 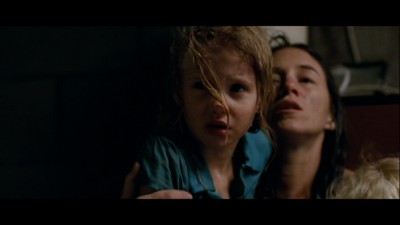 And speaking of external sources/references, how cruel is it that both of The Tree's main story elements have, quite specifically and memorably, been done infinitely better in other films that it can't help itself from directly reminding us of? Gainsbourg made an absolutely indelible impression with her fearless performance as a woman stricken by familial loss in Lars von Trier's Antichrist; the character of Dawn as conceived and written by Bertuccelli looks like a glib bimbo by comparison. And although Bertuccelli is French, The Tree is an English-language Australian/French co-production, set and shot in Australia, and its locale and idea can only remind us how much better Australian filmmaker Jane Campion's debut, Sweetie--with its very similar, prominent symbolic tree--was at using film language to imaginatively create a world that is conducive to such symbolism. Top all that off with Grégroige Hetzel's inappropriately melodramatic score elbowing its way onto the soundscape at every turn to pull the film even further into misguided glossiness, and you have a concoction that is so blithely unaware of its own shallowness that it's not even interestingly bad or a noble failure; it's just too mediocre to be worth the time you'll spend watching it.


The transfer, which is presented anamorphically at its original 2.35:1 widescreen aspect ratio, is excellent. All of the sunlit exteriors retain their richness and nuance, and all nighttime and darker/interior scenes remain solid in the black portions of the image, with no combing, aliasing, or other compression artifacts noted, and with all skin tones very well-preserved and natural-looking.


The Dolby Digital 2.0 surround soundtrack captures the film's very nicely done sound design wonderfully well. Everything is clear and full, with no distortion or imbalance to speak of.


The principal extra is a half-hour documentary, "In the Shadow of The Tree," which actually does shed some light on the dubious process of inspiration that resulted in the tepidness of the film (in addition to some behind-the-scenes footage and interviews with the producers, director, and cast): Bertuccelli originally wanted to adapt a tree-themed book by the great Italian novelist Italo Calvino, but his will stipulated that no screen adaptations were ever to be done of his work. She then found another novel about a tree (Our Father Who Art in Heaven by Judy Pascoe) to adapt; according to several sources, she was "obsessed with making a film about a tree." That actually could have been interesting, but she did not need a novel to do what an experimental nature film or documentary could probably have done much better; it is its failings on the human and storytelling fronts, not its dendrological aspirations, that defeat the film.

There are also nine deleted scenes that would have added some needed connectedness to ease the film's too-abrupt, very unconvincing tonal shifts had they been left in; alas, they add nothing by way of depth or style. Finally, the disc contains the film's U.S. theatrical trailer and a case insert featuring a Q&A interview with writer/director Julie Bertuccelli.


The Tree is a film that dives, headfirst and entirely unprepared, into some deep dramatic, emotional, and aesthetic waters and then just flounders around for an hour and 45 minutes, fumbling in vain for some clarity of vision or just some basic scene-to-scene control or precision (even the most "poetic," anti-realist, low- or no-narrative film has to have much more decisiveness to it in order to work than we get here). The problem with this film is not that it holds out a mystery that remains unsolved in the end, or that it works in symbols whose meanings never get pinned down; it's that its makers display neither the vision nor the skill to make one care. Skip It.