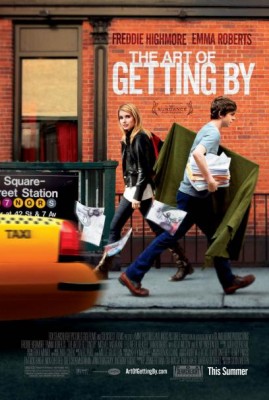 The Art of Getting By is not an endurance test. Many critics might feel inclined to peg it as such because of its youthful energy and stars, but the film is actually a tad better than its advertisements suggested. It's a story about learning to grow up, experience life, and live up to the potential that is laid out before you. It's one of those quirky indie-movies that is either adored or detested. The question of the day remains: Will it appeal to you?

The film isn't exactly what one might be expecting. The cover art for this release mentions that its "From the Studio that Brought You Juno and (500) Days of Summer", but this isn't either of those films and it never intends to be one of them. It never once focuses on Ellen Page struggling to decide if she wants to have a baby fathered by Michael Cera during her teen-life crisis and it equally doesn't spend time focusing on Joseph Gordon-Levitt having girl trouble with the adorably cute Zooey Deschanel. OK, so I seriously doubt anyone with genuine film-fandom would pick up the case and presume either of those odd possibilities (one would hope so...) but the fact remains that this isn't that easy a movie to pigeonhole.

The story begins by introducing its lead male protagonist, George (Freddie Highmore), and we get some immediately quirky voice-over narration which helps explain his current place in life. He is basically a young guy with no idea what it is he's supposed to be doing in life. That pretty fairly sums it up. He doesn't have that much interest in school or assignments, hanging out with others, and figuring out his future. The way George sees things: What's the point if you're just working towards your inevitable tombstone?  That's certainly very morose and not too likeable a sentiment but it's unfortunately a thought that probably is processing through far too many young people until a moment of realization can grab at soul-searching hearts and minds.

George doesn't seem to see what truly matters even when it is staring at him every single day in the form of a caring mother, a beautiful New York sunset, and a school that can be the source of learning and adventure. He doesn't yet recognize the endless possibilities in life and of living. Then George meets Sally (Emma Roberts) and things slowly begin to be possible for him in a whole new way. The pair begins a friendship and things quickly seem to be blossoming for them in a romantic way. Sally is also undergoing some huge personal questions though and she doesn't want to ruin the friendship by having sex come between them. Sally, quite unlike George, seems to be generally more comfortable with who she is and with her place in life. She enjoys partying, hanging out with friends, and meeting new people. But she still sees something in George that reminds her of who she is inside too. 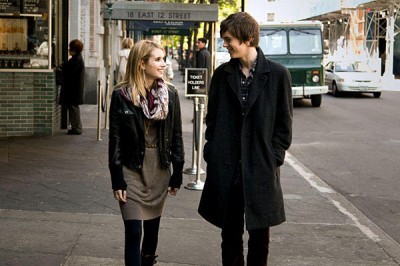 The story ends up transforming into a tale of friendship and love between George and Sally. This is the primary element of the story. Yet the film encapsulates many feelings found with youth and it carries these emotions with a delicate balance that is uncommon. There might be some elements that feel too familiar and cliché-driven but the heart of this picture isn't any of those things. This is a movie that comes from the personal experiences of first-time writer/director Gavin Wiesen and he wears his jubilant heart on his sleeve with real honor.

I thought the film was entertaining and witty. The characters were often charming. It was beautifully filmed with cinematography by Ben Kutchins. The skylight of New York was so beautiful and the location-shots were so carefully done. This film has the benefit of never feeling too confined by the common budget limitations imposed on indie-movies. Location shooting made all the difference.

The selection of songs and the breezy score used to accompany artistic camera-shots from Wiesen (photographed by Kutchins) also added to the enjoyment of The Art of Getting By. The music definitely added something special to the movie. It seemed like every selection was worthwhile.

The performances are strong from such young actors. Freddie Highmore is an actor that finds some interesting debate among many movie fans. As a child star he was either an adored favorite or considered something of an annoyance. He's a pretty talented young actor, in my estimation, and he delivered one of his best performances with this role. It helps that he plays well against the performance by Emma Roberts, who already seems destined to find even more success with future acting-gigs after the strong run that was: The Art of Getting By, Scream 4, and It's Kind of a Funny Story. She is a beauty with an immense charm and actual acting skills.

The Art of Getting By might not be perfect, and it sometimes strays close to material that feels all too familiar, but when it feels like experimenting a bit with the world it creates it captures some magic that I haven't seen in this type of movie recently. It's a worthy and enjoyable effort that deserves some extra attention. 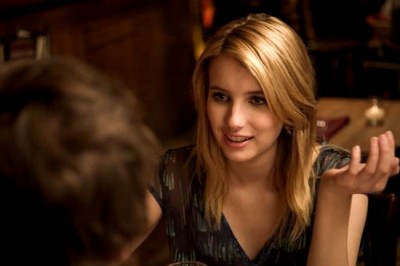 20th Century Fox has done a fantastic job with the transfer for The Art of Getting By. The film is presented in its original theatrical aspect ratio of 2.40:1.  The film has many great shots focusing on New York areas and each moment seems to highlight the beauty of the city with ease. The colors are strong without ever appearing over-saturated. This film has modern sensibilities that stand out distinctively with such keenly focused photography. It doesn't disappoint. The transfer is reasonably sharp. There is no damage whatsoever with regards to the print quality. The AVC encoding at 23 MBPS is enough to make for a great video presentation.

The audio doesn't slouch. That was definitely a surprise. The sound mix remembers to use score and song to emphasis certain moments in the film and the music certainly helped to highlight different aspects of the production. The film also uses the surrounds more often than anticipated. The aural soundstage is enveloping: clean, crisp, and pleasant. With the English language 5.1 DTS-HD Master Audio track The Art of Getting By sounds fantastic.

English descriptive audio is also provided in 5.1 surround sound. Subtitles are provided in English for the Deaf and Hard of Hearing (SDH), Spanish, and French.

The only substantial inclusion is the audio commentary by writer/director Gavin Wiesen. This is certainly worth listening to for fans of the film who want some insight into how the story came into being and about the production and filming process.

Fox Movie Channel Presents: In Character with Freddie Highmore (4:03) is just an incredibly brief interview with the leading actor. He provides some insight into his thought process behind performing the character and why he felt the film was relevant.  MPEG-2, Letterboxed Presentation.

HBO First Look: The Making of the Art of Getting By (AVC, 12:31) is short making of featurette containing plenty of interview footage with the films cast and crew. This reuses some of the same footage found in the other extras, but it also has quite a bit that is new. This wasn't nearly as informative as some of the other HBO First Look's I have seen in the past but it did provide some nice interview clips regardless. 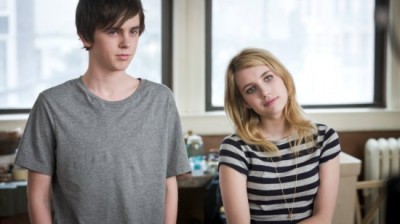 The Art of Getting By wasn't a challenge to sit through. It's actually a pretty sweet-natured movie about growing up and finding yourself. It's not groundbreaking on any level but the film is true to itself and has some nice moments. The performances are also considerably strong. The Blu-ray presentation is excellent. If The Art of Getting By sounds like an enjoyable movie to you then it's well worth watching... to see for yourself if it's that special cup of tea that appropriately remembers your past or present memories of youth.  Recommended.