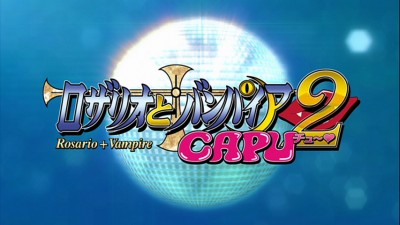 Rosario + Vampire: CAPU2 (the second season of Rosario + Vampire) is a fairly typical "fan-service" heavy series focused on a central male character (in this case, with the name Tsukune) being surrounded by a large number of women who are desperately head-over-heels attracted to him for some strange reason. Based upon the popular manga series by Akihisa Ikeda, this is a silly and offbeat series.

Plot-wise, the show takes place primarily at the Yokai Academy. Tsukune is a normal student and human teenage boy who doesn't get into the school he applied to and it bizarrely results in his parents finding a downright strange and quite random school admissions letter for admission into a school that none of them had ever heard of... Tsukune might have gone to a normal school if only he had gotten better grades.

It turns out that the Yokai Academy is no ordinary school. It's a school for monsters, created by monsters, and run by monsters. This means it has a multitude of strange students that aren't exactly human-beings. Tsukune had no idea what he was getting himself into by enrolling in the school. Can he survive the weirdness? 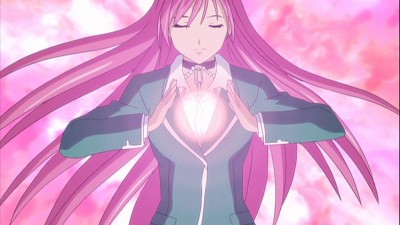 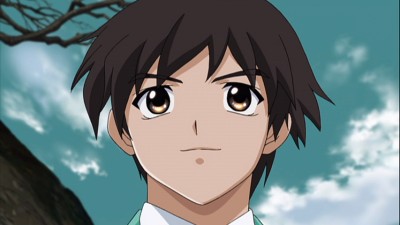 Tsukune is a sort of standard, normal teenage guy who doesn't really stand out as an overwhelmingly huge "ladies-man" but he somehow attracts all of the ladies anyway. Viewers are pretty much expected to just watch the show and accept that tons of the school's female students are attracted to him. His character is never given much of a developed story and he is mostly just seen at the surface-level. He never fully shows interesting sides to his personality that would be absolutely distinctive, other than the characteristic of being caring for others. I guess he seems to like the girls enough, as nosebleeds (all so common in anime) are frequently a result of what he encounters. I wouldn't say that the series seriously considers him as having a legitimate companion candidate in any girl besides the central female protagonist.

Moka is the main female protagonist who has her eyesight on Tsukune in the anime. Considering the massive Vampire craze of the past several years, it comes as no big surprise to see an increase in supernatural and vampire series. Her character isn't a standard-type of vampire at all. She's sweet, kind, and caring. Her personality is an interesting offset to the typical expectations most might have for a vampire-imbued storyline. She has long, flowing, pink hair and a magic locket that looks like a cross, containing the power built up inside of her vampire-side. She can transform into the powerful vampire-form when the locket's removed (which makes Moka have a more pronounced appearance with silver hair and a stronger build). As Moka transforms, everyone witnesses her gain a tough attitude, confidence, and a butt-kicking ability frequently needed to save everyone on the show from troublemaking monsters.

In addition to Moka, there are many other central female characters on Rosario + Vampire that have affection for "heartthrob" Tsukune. They are named Kurumu, Yukari, and Mizore. Kurumu is a succubus who is able to use powerful charms. Yukari is a witch who can use a variety of spells. Mizore is a snow fairy with the ability to control and freeze ice and snow. Almost every episode consists of them all fawning over Tsukune in an attempt to try and defeat the odds and win out against the rest of the girls in a quest for his affection.  Each character is given a different type of personality and appearance. Kurumu is enthusiastic, cheerful, and playful. She is voluptuous and has blue hair. Yukari is immature, annoying, short, flat-chested, overly energetic, and yet almost like the sweet younger sister to the other girls (as she is several years younger than the rest of the girls on the show). She is almost always wearing a brown witch hat, has short brown hair, and uses a pink heart-shaped wand. Mizore is the most laid-back of the bunch and she has some indifference towards Tsukune at the beginning of the show. As the series progresses, she seems to desire Tsukune's attention just as much as the rest of the girls. She has purple hairdo, frequently wears a belt around one leg (for whatever odd reason), almost always has stockings on her legs, and she is characterized through being shy, popping up in odd random places (for instance, behind everyone else in a bush), and she seems to be a somewhat sad person when compared to the other characters. Besides Moka, she is probably demonstrative of having the most caring personality on Rosario + Vampire. 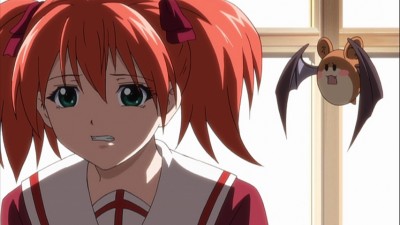 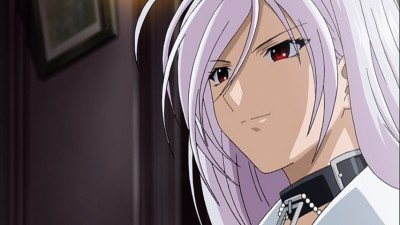 The second season (CAPU2) of the supernatural comedy Rosario + Vampire improves in some ways; over the first collection of episodes from season one.  The series remains the same type of show, but it has made some renovations to use better animation, stronger writing, and an increase in focus on characterization.

The second season introduces a new character named Kokoa. She is the younger sister of Moka. They both have the same vampire father. Their names must surely be attempts at comedic naming (i.e. mocha, cocoa). Kokoa's a red-haired energetic girl who views her older sister as a major role model but only in the pure vampire form where Moka is the strongest of the bunch. While the beginning of the season seems to suggest that she is probably going to fall for Tsukune, this element of the story goes away pretty quickly. It doesn't appear that the writers wanted to add yet another central character to a group already consisting of four girls having massive crushes on the same guy.

The animation is certainly improved over the first season of episodes.  So is the writing. These areas are primarily strengthened through new attempts at bringing more variety. Rosario + Vampire: CAPU2 doesn't try to reinvent the wheel it started with the first set, though it does attempt to remedy some of the repetitiveness. The plot doesn't end the same way almost every episode this season. It also manages to be very different for a greater portion of the show. The improvements aren't perfect but appreciable. The bat character that almost constantly annoys is barely around anymore.  That was a strong change of pace. The overall quality seemed significantly higher (even if the show isn't exactly great to begin with) because it felt as though the creative team was investing massive amounts of energy into the second season. This is something that was never recognizable when the characters and story were just becoming introduced.

The second season also improves by not taking things as seriously as the first season. Despite being a genre comedy series, it seemed as though things were taken a bit too seriously during the initial run of episodes. The story never seemed to warrant it but a portion of the show seemed to suggest the opposing monsters at Yokai Academy could actually defeat the lead characters. This aspect turned out to be far from the case and season two barely ever suggests it as a possibility at any given time. 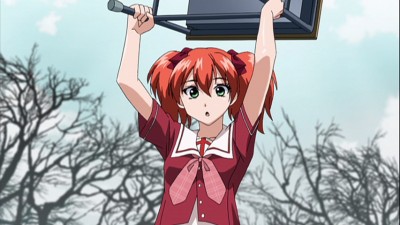 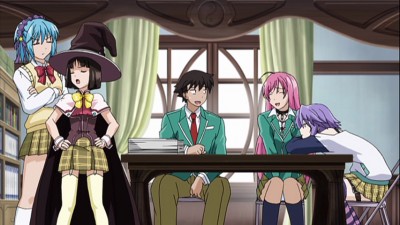 Alas, the series still remains less funny than it wants to be, and the story doesn't seem completely resolved by the time the conclusion is reached. The relationship that exists between Tsukune and Moka still remains important to the show.  There was never any moment where it seemed like Tsukune would wind up picking another girl as his future girlfriend or wife. Then the ending suggests, rather abruptly, that he hasn't even made decisions regarding who he likes the most.  It doesn't really feel like the ending to this storyline at all. It just... ends.

The series continues to falter by having too much fan-service content that shouldn't be included in the first place. I'm referring to the weird sexual imagery used for the witch Yukari. This type of content doesn't belong in this type of series. It's disgusting, and it definitely lowered my overall opinion.

Rosario + Vampire: CAPU2 makes improvements, but does it warrant sitting through an almost entirely lackluster first season? I'm not sure that it does. Viewers would be better served skipping the first season altogether, but then the introductions to the central lead characters is lost entirely. Then there's the fact that I don't feel like recommending this series at all based upon some gross choices made by the creative team. I'm not a huge follower of fan-service based anime series but this one just pushes some things too far. 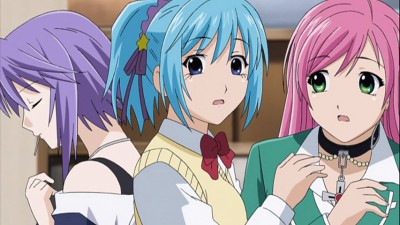 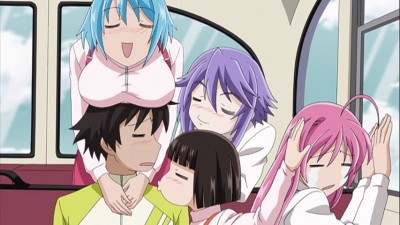 Rosario + Vampire: CAPU2 has been given an impressive presentation from Funimation. The colors are vibrant and the overall image remains clean, crisp, and reasonably sharp. While this wasn't the most impressive PQ that I have seen a Funimation DVD release contain, it certainly ranks among the better releases to date in this area and it won't disappoint fans hoping for a nice release. The series has been presented in a 16:9 broadcast aspect ratio, preserving the widescreen image with anamorphic enhancement.

The audio was generally impressive as well. Both the English 5.1 Surround Sound mix and the Japanese 2.0 stereo options would be worth listening to. The English surround is better in terms of the use of sound effects and expanding the music score and songs. The dubbing was pretty impressive as well for the English version. The Japanese dub is good too, though, and is going to be worth keeping as a preference for those who prefer to listen to any anime with the original dub version. English subtitles are provided.

The only extras included on this release are text-less songs for the opening/ending credits and trailers for other Funimation releases. 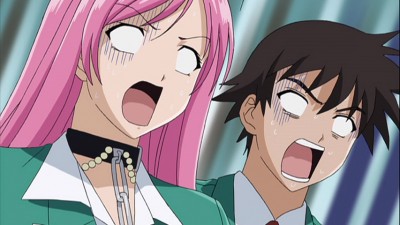 Tsukune and Moka reacting to my review...

CAPU2 is the second season of the Rosario + Vampire series. It's actually a pretty huge improvement over the first season, mainly because the writing was better and diverse in style compared to what was offered during the first trip to Yokai Academy. Unfortunately, the series isn't ever given the chance to be as compelling as it maybe could have been at one point. Considering the weak first season it's difficult to recommend the second one as something to see. The series is also unnecessarily perverted with a character that shouldn't even be in an anime like this. CAPU2 certainly improves in a number of areas but the end result is something worth renting at best. Most will simply want to watch another, better, anime series. Skip It.