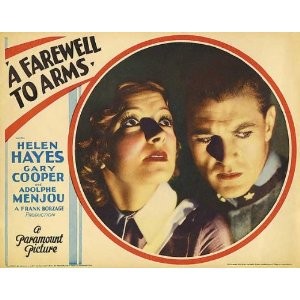 Depending on which side of the Great Hemingway Divide one happens to fall on, Frank Borzage's wonderful 1932 screen version of "Papa"'s novel A Farewell to Arms could stand as yet another example of what Godard said in the '60s about bad/cheap/otherwise less-than-literary novels making for very useful raw material in the creation of potentially great movies. If, on the other hand, you are one of the many admirers of the straight-shooting, lean machismo that marks Hemingway's style, be forewarned: Borzage "adapts" all of that right out of his vision of the story, which flirts with sentiment and earns every swooning moment through its acute, expansive, and adept playing with cinematic style.

The dashing Gary Cooper is Lieutenant Frederic Henry, an American expat who, as Europe descends into the horrors of the first world war, has become an ambulance driver for the Italian army. He and his chum/superior, Major Rinaldi (Adolphe Menjou, whose fine comic performance partly redeems his character, who is sometimes a pretty blatantly silly-offensive Italian stereotype, e.g., his observation that "You Anglo-Saxons sure like to clean yourselves!"), spend their R&R drinking to excess, chasing girls, and patronizing brothels. When one of these debauched evenings is disrupted by the explosions of a bombing attack, Lt. Henry drunkenly mistakes a rather prim English nurse, Catherine Barkley (the adorable Helen Hayes) for the prostitute with whom he's just been commingling; she is instantly attracted, both amused and shocked by this handsome cad. As a reinforcement of the mores the nurse has to live with, the first, foreshadow-y event of the film has been the dismissal of one of her colleagues for the disgraceful transgression of getting knocked up by a soldier, which is just what now happens to the much stronger and more cautious, yet still only human, Ms. Barkley after she recognizes Lt. Henry a few nights later; he is the other male member of a double date in which she has been paired off with Maj. Rinaldi. The lieutenant and nurse promptly do a switcheroo on their respective dates, and their whirlwind, desperate romance begins, its harsh deadline the moment a few days later when they both know Lt. Henry will be called back to the deadly-dangerous front. Their act of passion under these harried and urgent circumstances, in which the nurse's respectable virginity is lost (the film's surprisingly frank dealings with sexual matters marks it as definitely pre-Code), leads to the unlikely result of the playboy and the puritan falling deeply and truly in love at exactly the most emotionally risky moment imaginable. 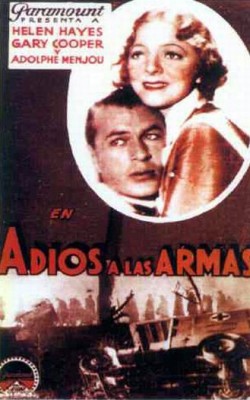 The loss of his drinking and philandering buddy to a woman who was rightfully his date pushes Maj. Rinaldi into an envious ambivalence toward the lovers, and he abuses his power several times during the course of the film in order to separate them, only to be so impressed by the depth of their love that he corrects his cruelty and reverses his decisions. In the first of these reversals, after he has banished Nurse Barkley to a hospital in Milan, his change of heart leads him to dispatch the injured Lt. Henry to the same institution, where the pair, their love cemented by her tender care, is married by a sympathetic priest as the lieutenant lies in his hospital bed. But under the continuing disapproval, pressure, and underhandedness of their peers (Nurse Barkley's best friend, a fellow nurse, also strongly disapproves, most likely--in another pre-Code intimation--because she's carrying her own torch for Barkley), the two are separated once more, and it seems that they may not be able to find one another in time for Lt. Henry to learn the secret that his wife has kept from him so as not to add to his strain: she is carrying his child. The lieutenant, unable to reach the love of his life--who has now, unbeknownst to him, moved to Switzerland for its more peaceful prenatal environment--finally prioritizes love over war and deserts to look for her, a treacherous journey we can only hope ends in his finding his bride, increasingly ill and desolate as her pregnancy wears on, before it's too late. 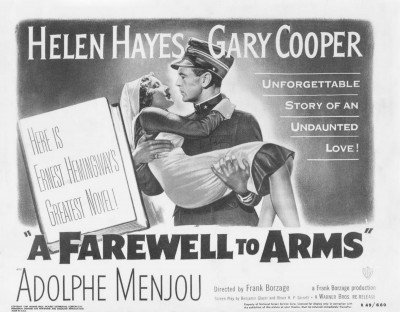 The style with which Borzage tells this story is, in a word, delectable. The film was released in 1932, just a few years after the advent of motion picture sound, but the fluidity, even restlessness of Borzage's camera completely undermines the conventional wisdom that the price paid for sound in the beginning was a rigid, boring visual stasis. Two roving-camera sequences in particular stand out in the mind long after the film concludes: In the first, Lt. Henry is being carried into the Milanese hospital on a stretcher, and we spend a long span of screen time looking through the moving camera from his point of view (a POV trick that is itself notably advanced; Julian Schnabel would make almost an entire film out of it 75 years later with "The Diving Bell and the Butterfly) as he is conveyed through the hospital's corridors and into his room. In the other, Nurse Barkley writes a falsely cheerful letter to Lt. Henry, read in voice-over and describing a comfortable, luxurious hotel room as the camera pans away and settles in turn on each grim reality contradicting the situation she's embellishing and falsifying for the sake of her husband's peace of mind. Even when the camera isn't moving, Borzage's framing and mise-en-scène are uniformly inspired and enthralling, his angles fresh and inventive; the simplest close-ups feel extraordinary in their lighting and precise, ultra-romantic composition, and the rapturous visual expressions of the story's more poetic moments make it very easy to forgive and remain awed even when the poeticism goes a little over the top, as it does in the very last, soaring moments.

Of course, the kinds of flights of romantic exuberance Borzage takes us on, his pleasure in pushing his craft into a newly elaborate fullness of expression rather than purifying it to its most economical, is practically antithetical to Hemingway's clean aesthetic, and the author apparently (and predictably) disdained the film. But he was a novelist, not a filmmaker, and going just by the abundant merits of A Farewell to Arms (I am not, unfortunately, all that familiar with Borzage's filmography, an error I hope to remedy soon), one could go so far as to make the claim that Borzage was, on the terms of his own medium, Hemingway's equal as a creative force. 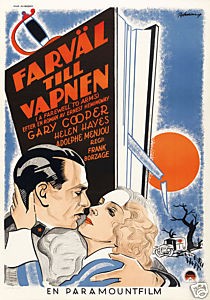 
This AVC/MPEG-4, 1080/24p hi-def transfer (retaining the original 1.33:1 aspect ratio) gives us the film's remarkably well-preserved images in all their finely wrought glory. There is some flicker/blurriness at times, but this is clearly a result of the film's age and the un-perfected cinematographic processes of the time, just as the grain throughout is less of a distraction than an aesthetically apt perpetuation of the film's original celluloid texture. All things considered, it's an incredibly well-done transfer, and up to Kino's by-now predictably high standards.


The PCM 2.0 uncompressed monaural soundtrack reveals the comparatively rudimentary sound technology of the early talkie era and, in particular, the age of the audio materials, but that only means that the sound is not pristine, which would frankly seem a little off when you know you're watching a film from 1932). So, there is a somewhat muted sound level throughout, some intermittent pops, a little audible fuzz here and there, and some distorting/crackling loudness when there's an explosion, but it all seems right for what we're looking at, and everything is always clearly audible (the dialogue track in particular sounds quite immediate, all things considered). These flaws are never a real distraction, and it is clear that the best possible job has been done to correct any egregious problems with the sound, and that the audio has been cleaned up to the fullest extent possible.


Not much here, just a stills gallery collecting some pretty photos from the film and its advertising campaigns. Several trailers (none of them, curiously, for A Farewell to Arms) are also present, including the thematically connected (because also David O. Selznick productions being released by Kino) 1937 version of A Star is Born directed by William Wellman and starring Janet Gaynor and Fredric March, and the concurrent, also Wellman-helmed comedy Nothing Sacred with March and Carole Lombard. The trailer for another Kino release, the restoration of Albert Lewin's 1951 film Pandora and the Flying Dutchman, with Ava Gardner and James Mason, is also included.


A Farewell to Arms is a much-less-than-faithful adaptation of the Hemingway novel upon which it's based, but that is either an indifferent thing (if you're a Hemingway fan) or a good one (if you're not). Its fantastically inventive and daring director, Frank Borzage, transforms the story into something all his own, making it a testimonial to the high aesthetic standards and astonishingly open possibilities of classical studio-system filmmaking as he fluently and avidly uses the language of the medium to tell the tragic, overwhelmingly romantic tale of a lieutenant and a nurse brought together and separated by the vicissitudes of World War I. It's a must-see specimen of American film from right after talkies took over, and an early sampling of the cinematically enraptured spirit that would blossom so copiously and widely over the next couple of decades as Hollywood experienced its golden era. Highly Recommended.