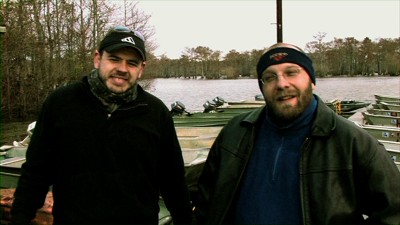 Imaginative, creepy, and engaging, Lunopolis is an ambitious, small-scale triumph of no-budget filmmaking. Director/writer/producer/star Matthew Avant takes the structure of a television documentary program and a well-executed "found footage" narrative and blends them into a finished film that works well enough to carry the movie past a handful of flaws and limitations.

The story begins with a frantic call-in to a conspiracy theory chat show, where a breathless, nervous caller informs the host about colonies of people living on the moon. Soon after, a mysterious package arrives at the show headquarters with some documentation that lends a little credibility to the anonymous caller's claims. Two of the show's researchers, Matt (Avant) and Sonny (Hal Maynor) follow up on the package's leads, quickly discovering a web of people, places, and things that paint a disturbing picture of both the past and the immediate future.

The best aspect of Lunopolis is how it gets under the viewer's skin in fun and interesting ways. Avant is adept at taking real-world ideas, like the end of the Mayan calendar, the theory of Atlantis, and the feeling of deja vu, and combining them with his own ideas to create something that the viewer can simultaneously laugh at and take emotionally seriously, in the context of the story. His references aren't exactly subtle -- a character named "David Muscadine" is in charge of a loopy, potentially dangerous religious cult founded by a sci-fi author named J. Ari Hilliard -- but they work, because Avant is willing to present or reference the information, then let the viewer's imagination make the full connections.

Although the opening and closing news broadcasts are kind of questionable, Avant's grasp of tone and timing are excellent; even at the very beginning as Matt and Sonny descend into a pitch-black crawlspace while following their first clue, there's already a sense of looming dread, which Avant sustains throughout the film with the sense that someone might always be watching. It helps that he and Maynor are able to make the dialogue in the found footage feel mostly authentic and unrehearsed, and Avant has a real secret weapon in the form of actor Dave Potter, who gives weight to the ideas right as the movie could become unbearably silly, almost singlehandedly driving the second act of the movie. 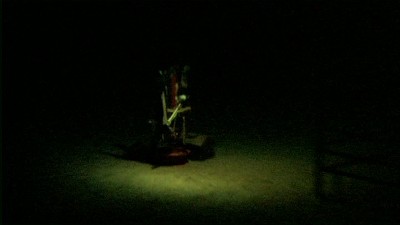 All of this is accentuated by a series of fictional authors and scholars in History Channel-style talking heads. It's a weird stroke of genius: although it's only a shade away from the usual mockumentary (if that), something about the "hour-long special" specificity makes the style really effective.

Cheap visual effects and terrible Photoshop are chinks in the movie's armor, and the home stretch has a few curveballs that seem suited to a different kind of movie, leading to an ending that goes past "appealingly open-ended" and just a little into "frustratingly vague", but it's surprising how well Lunopolis works. With so many "auteur"-style productions lacking the necessary perspective and collaboration that a good movie requires, Avant has his eye on the overall picture and ideas in his film rather than the tiny details, and it shows. Lunopolis an effective, electrifying little movie that's refreshingly interested in engaging the imagination rather than just the eyes and ears.

The DVD
I've seen two versions of the artwork used on the DVD cover of Lunopolis online, and I prefer the darker, more textured version used here than the cleaner, brighter one that served as the movie's poster. That said, it's easy to forgive anyone who flips the disc over and becomes concerned that this might be a production of YouTube quality -- it looks more than a little questionable, unable to capture either of the "documentary" tones the movie actually contains. There is no insert inside the case.

The Video and Audio
Although this is a DVD-R, I feel pretty confident that the 1.78:1 anamorphic widescreen presentation offered here represents final copy, and it looks like a low-budget movie, shot on digital video. Contrast is quite inky, leading to some black crush on dark clothing and the occasional bit of posterization, and the image is grainy and filled with digital artifacts, with washed-out colors and almost no fine detail. Dolby Digital 5.1 audio is also pretty no-frills, mostly consisting of the two guys talking to the camera, 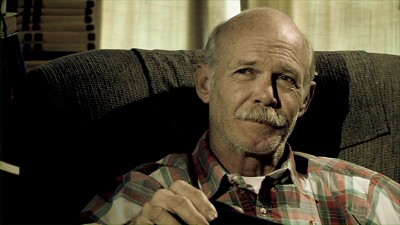 with the occasional moment or two when something big happens. Both the picture and sound, flaws and all, appear to be inherent to the source, so although it doesn't technically look and sound "good," no complaints here. No subtitles appear to be encoded on the disc, but if your television offers closed captioning functions, those are included instead.

The Extras
There is only one major extra: an audio commentary by director Matthew Avant, production stooge/cameraman Nathan Avant, and associate producer Michael David Weis. It starts out strong, with Matthew talking about the ideas that inspired him to make the movie, both in terms of story and style, and covering his own interest in conspiracy theories and trying to make a movie that capitalized on the things that were interesting while maintaining a sense of humor, but it loses focus for long stretches, with comments turning to Weis' reaction to things and production minutia. Worth a listen, but a little inconsistent.

The only other extra on the disc is the film's slightly spoilery home video trailer.

Conclusion
I was quite impressed by Lunopolis. I went in with very low to non-existent expectations, and the movie really took me by surprise with its creativity and unity of vision, the latter of which is sorely lacking from most low-budget, independent features. Although viewers may not go with every one of the movie's twists and turns, and the film has its limitations, I highly recommend it to anyone looking for something original and off the beaten path.