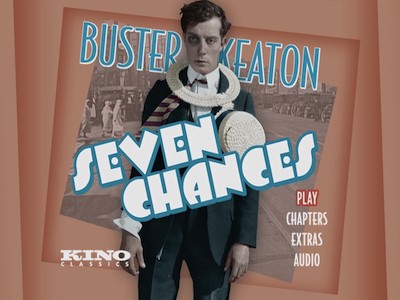 Seven Chances may be the funniest Buster Keaton film I have seen as of yet. Tightly packed at a scant 56 minutes, this 1925 silent comedy has a simple premise: Buster, playing troubled financier James Shannon, will inherit $7 million dollars if he's married by seven o'clock on his twenty-seventh birthday. Naturally, this news comes to him on that very birthday, and with only hours to spare, Buster goes searching for a wife so he and his partner (T. Roy Barnes) can pay their debts and avoid jail. When Buster's proposal to Mary (Ruth Dwyer), the girl he's always loved, falls flat, he and his colleuges undertake a desperate hunt to find a willing bride by any means necessary.

Naturally, the comedy that follows springs from Old Stone Face's embarrassing attempts to woo young ladies. He tries the direct approach, written notes, getting down on one knee--none of it works. The whole situation escalates when his business partner places an ad in a newspaper promising the big bucks to whatever eligible woman can get to the church in a bridal gown by five that evening. A parade of hopeful old maids rolls in, and once they get the idea that they've been the victims of a hoax, a merry chase ensues. 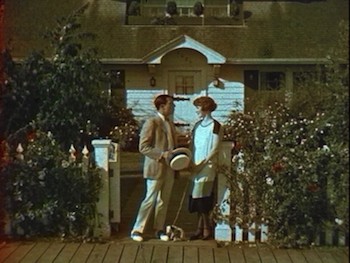 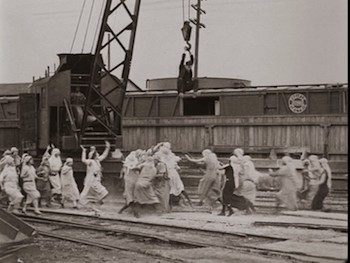 While the "plot" of Seven Chances may be nothing special, Keaton--who also directed--turns the familiar situation into hilarious comedy by effectively escalating the scenario from a quiet place to an uncontrolled frenzy. The beginning of the picture--which is shown in quavering early Technicolor--notes how long the shy moneyman has avoided telling Mary his true feelings. From this standing position, Keaton slowly accelerates, layering on ingenious sight gags (the barbershop bit had me in stitches) and touching character elements to the point of bursting. The long chase with the would-be brides gathers more and more bric-a-brac the longer it goes on, and Keaton's stunts not only bring big laughs, but many cries of "Holy crap! How did he do that?!" He tumbles down mountains, falls from treetops, and even has to outrun an avalanche. His sense of timing not only invigorates the comedy, but it creates a sense of true danger, as well.

Surprisingly, Seven Chances was one of Keaton's least favorite of his own movies. This may have little to do with how the film turned out and more with how it began. Apparently, the producer, Joseph M. Schenck, pushed the material on Buster. Seven Chances is based on a play by Roi Cooper Megrue, the rights to which Schenck owned. Despite his reluctance to undertake the project, Keaton turned out an inspired comedy classic despite himself. Amusingly, Seven Chances would inspire others, as well. The Three Stooges teamed with Seven Chances-screenwriter Clyde Bruckman in 1947 to put their own spin on the idea. The effect is somewhat different, but also quite funny--and Kino has been kind enough to include that short as part of their Seven Chances: Ultimate Edition, along with other extras detailed below. 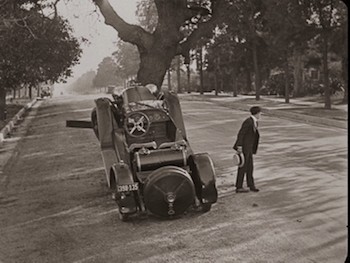 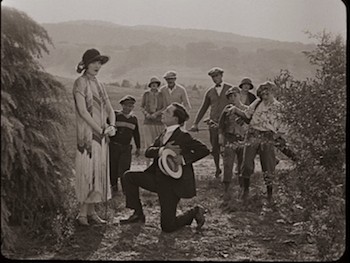 Video:
The restoration of Seven Chances for this Ultimate Edition lives up to its name. The full frame restoration, which was put together using archival materials from the Library of Congress, has a clear picture with only the most minor of scuffs and scratches. The image is stable, with strong resolution that allows some of Keaton's trickier "in camera" gags (such as the dissolve between his parked car in different locations) to work all the better. I didn't notice any jagged lines or blocking, either.

Sound:
Robert Israel's robust orchestral score is included with two options: a 2.0 stereo and a 5.1 surround mix. Either sounds excellent, though I agree with my colleague Christopher McQuain, who reviewed Kino's Blu-Ray version, that the more grounded stereo mix better fits the silent feature, as the fancier option tends to overtake the simplicity of the proceedings.

* Audio commentary by Ken Gordon and Bruce Lawton: The pair dissect the origins of the film, Keaton's technique, and the movie's place in the comedian's overall body of work.
* "Silent Echoes: Seven Chances" (10 minutes): Historian Jon Bengston compares the Los Angeles locations seen in the film to how they look now.
* Analysis of the Technicolor sequence (6 minutes, 15 seconds): Eric Grayson, who is part of the restoration team, uses the opening section of Seven Chances to explore early employment of color film and the restoration process.

As mentioned above, we get the Three Stooges short A Brideless Groom (17 minutes), which was a sort-of remake of Seven Chances, along with an earlier silent film, Edwin S. Porter's 1904 piece How A French Nobleman Got a Wife Through the New York Herald Personals Columns, which may have inspired Keaton's twist on the subject in Seven Chances.

Finally, there is a gallery of production stills.

FINAL THOUGHTS:
Highly Recommended. Though Seven Chances may not be one of Keaton's regularly discussed or most revered works (though, to be fair, it does show up on a lot of "essential" lists), it is one that is guaranteed to inspire a maximum amount of guffaws from even the most jaded audience member. This uncluttered short comedy features all the expected components of a Buster Keaton picture: a little heart, a bit more peril, and a whole lot of humor. The tale of one hapless man's quest for love and fortune turns into a slapstick chase that confounds and delights, giving meaning to the phrase, "You won't believe your eyes." Kino's new Seven Chances: Ultimate Edition pairs an impressive restoration with excellent extras, making for a well-deserved upgrade. 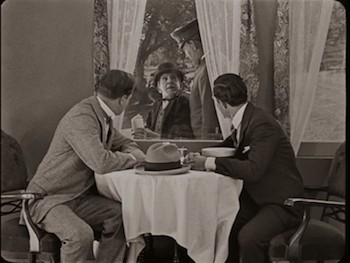 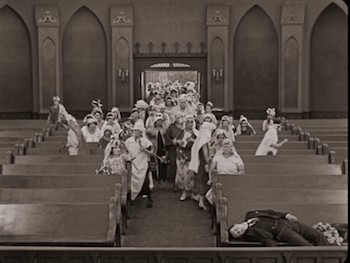