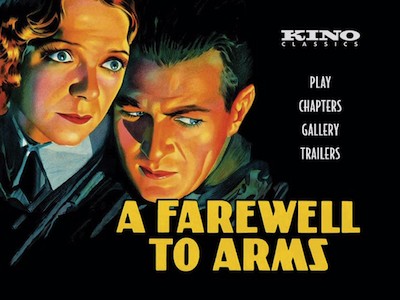 Frank Borzage's 1932 adaptation of the Ernest Hemingway novel A Farewell to Arms may have been reviled by the book's author for some of the romantic liberties it took with his story, but this black-and-white melodrama deserves to be considered one of the great weepies of the early sound period.

Gary Cooper stars as Lt. Frederic Henry, an American who is in Italy during the First World War driving ambulances for the Italian side. On a pit stop at an army hospital, he meets Catherine Barkley (Helen Hayes), a British nurse known for her chastity and dedication to duty. Frederic's pal Rinaldi (Adolph Menjou) has designs on Catherine, but Frederic swoops in and romances the girl. He takes her virtue the night before he is due back on the front, though not without giving up more than a little of his heart in exchange.

Frederic ends up wounded on his excursion. In one of Hemingway's great ironic indictments of war, Frederic's leg is damaged when a bomb goes off and destroys the bunker where he's sitting and eating cheese--a pointless sacrifice if ever there was one. While convalescing, he and Catherine grow closer and they even commit to one another with the help of a tired priest (Jack La Rue) who believes in love. The happiness is not to last, however; Frederic must return to the battlefield. He leaves without knowing that Catherine is pregnant. She would rather not worry him, so she sneaks off to Switzerland to have the child in secret. Little do they know, they will soon lose one another. When Rinaldi fears that love will distract one of his finest men, he stops the couple's letters from getting through.

Borzage (The River) and writers Benjamin Glazer (Carousel) and Oliver H.P. Garrett (Duel in the Sun) stick to the essential skeleton of the Hemingway novel for the film of A Farewell to Arms. There is the quick courtship, the tragic shell attack, the hospital, the pregnancy, and even Frederic's ultimate desertion. The soldier's flight from the battlefield is the most stunning sequence in Borzage's film, shown as a montage of atrocities, with battlefield and graveyard images reminiscent of Raymond Bernard's Wooden Crosses, released that same year. His quieter scenes behind the lines have an otherworldly, almost idyllic design to them, with the medical staff holing up in churches and the absence of civilians allowing for a certain pageantry. The women are in flowing skirts and capes, the men in their dress uniforms, complete with medals, epaulets, and fancy hats.

Gary Cooper turns in a sensitive performance as the soldier, downplaying the machismo and instead lending a dark brooding to the role. Helen Hayes is marvelous as the nurse. She pulls off a kind of ironic bait and switch, using the character's tenderness to mold a tough, unyielding figure. She is no fainting damsel, nor a woman easily taken advantage of, but one who makes difficult choices even when she feigns blinding herself to the risks. The pair has strong chemistry together, making for a particularly emotional finale. You might want to have some tissue nearby to dry your eyes when the end titles appear. 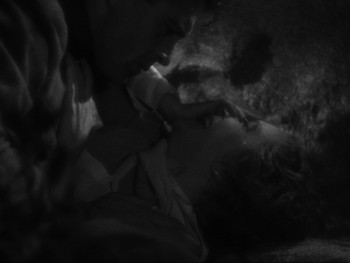 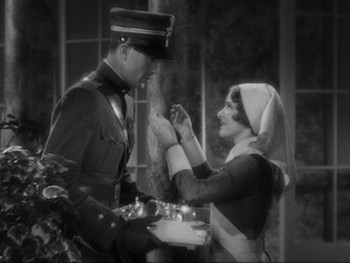 Video:
Kino has released A Farewell to Arms as a new full frame DVD with an image framed at a 1.33:1 aspect ratio. Though not a perfect restoration--you will see occasional hairs and dust at the edge of the frame, scratches, and jump cuts--it is a pretty good one, especially so for a film this old. The picture is always clear and the resolution is sharp, with nice balance in the black-and-white photography.

Sound:
The original soundtrack is mixed in 2.0 mono, and it sounds fine. The voices can run a little hot, and there is some background hiss here and there, but overall the dialogue is clear and the music sounds full rather than tinny.

Extras:
A short gallery of promotional materials and some trailers.

FINAL THOUGHTS:
The 1932 adaptation of Ernest Hemingway's A Farewell to Arms is a smartly distilled, if slightly romanticized, take on the author's revered anti-war romance. Master director Frank Borzage stages a melodrama that is impressive in emotional scope, with marvelous performances by Gary Cooper and Helen Hayes as the soldier and the nurse who find love amongst the blood and guts of battle. It's a tearjerker, to be sure, but one that set the standard for all that would follow. Highly Recommended. 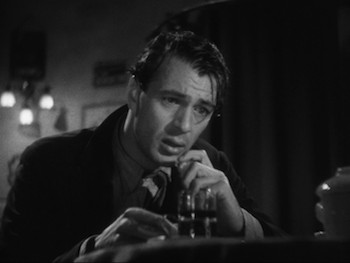 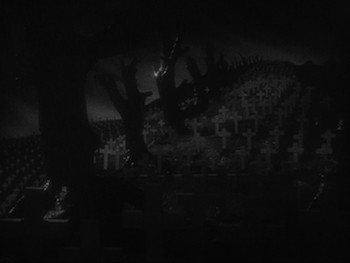