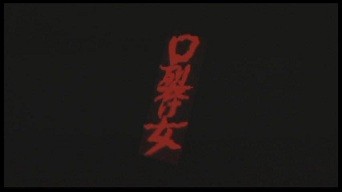 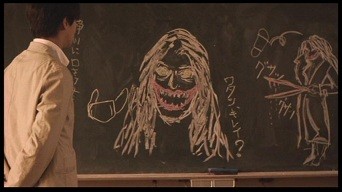 Before I begin this review, Palisades Tartan's DVD release of The Slit-Mouthed Woman should not be confused with an earlier (and apparently more graphic) title of the same name reviewed by Daniel Siwek for this site here - though both films are based upon the same Japanese urban legend. It has, however, been apparently released before under the monicker Carved - reviewed by Nick Lyons here.

And while I'm at it in the clarification department, allow me a moment to provide another "heads up." This Asian horror flick does not have an English language dub; this means, in other words, subtitles only. I know that's a deal breaker for some who may come upon this review, so you've been adequately warned in advance. 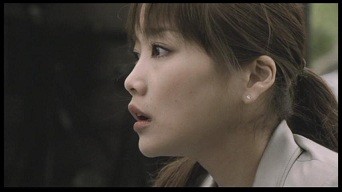 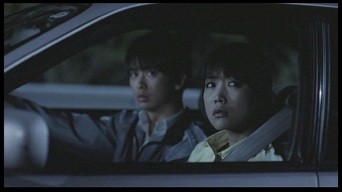 In any case, let's get to The Slit-Mouthed Woman herself. The supernatural specter that haunts this recent Japanese film, released on DVD last month by Palisades Tartan, is quite memorable. The titular character shares a common ancestry with the raven-haired young ghosts familiar to ju-on fans, but she's dressed like a killer out of an old Dario Argento shocker or an early slasher film, replete with a surgical mask, a trenchcoat, and a long pair of razor-sharped scissors. She'll also just . . . appear . . . on a sunny afternoon at a kids park or inside a home to menace schoolchildren. Yes, this spirit is disturbed and creepy - and she likes to roam away from the shadowy confines of her old home. Additionally, the rictus appearance underneath that mask (basically spoiled on the DVD's cover art and menu system) is genuinely frightening, even if the CG used to create it is only half-convincing. And how's this for a kicker? The malevolent ghost is awakened by nothing less than an earthquake(!) Talk about a harbinger.

The Slit-Mouthed Woman's themes of child abuse and the power of urban legends amongst the young, unlike its antagonist, are only sporadically successful in their realization here. After a well-edited montage of scenes in the opening minutes that establish how children and their parents and teachers share the rumors of this urban legend phantom, the film loses some gas. I'm not saying this is a bad movie - It isn't. However, the film's central protagonists - two schoolteachers interested in protecting their charges after the Slit-Mouthed Woman kidnaps a few children - never really develop any chemistry. To be honest, the characters don't make a whole lot of sense in conception. Mrs. Yamashita (Sato Eriko) is trying to build a career for herself after her husband takes their daughter away in a divorce. Why? Because she's beaten the girl. What school system hires someone with a history of domestic abuse? The other teacher, Mr. Noboru, can hear the Slit-Mouthed Woman whisper "Am I pretty?" every time she prepares to attack a young child. Once it's revealed why, you'll want to slap the guy for his suddenly cured bouts of amnesia - and wonder about the "pretty" line, which is never really explained anyway.

Plot and character concerns aside, The Slit-Mouthed Woman, like a lot of modern Asian fright flicks, certainly gets things right in the atmosphere department. The scary visage of the ghost here is complimented by several well-shot scenes where she will just appear almost out of the blue and strike. Another clever conceit has the ghost able to inhabit the bodies of the living (something established very early on - it's not a major spoiler), with the intended vessels heralding her imminent arrival with a series of coughs. Plus, several brief scenes set in a well-populated school auditorium and a busy police precinct provide a large scope and import to the goings-on that most films in this genre do not possess. Neat, scary stuff overall.

So, all in all, Shiraishi Koji's The Slit-Mouthed Woman is a flawed but watchable "J-Horror" import courtesy of Palisades Tartan. Fans will want to check it out, so I'll go with a "Recommended" rating. 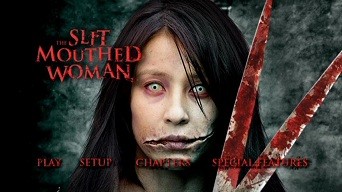 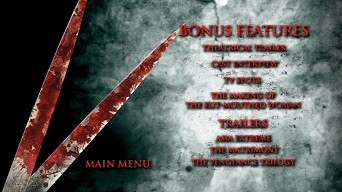 Palisades Tartan gives The Slit-Mouthed Woman an anamorphic widescreen presentation in a 1.78:1 aspect ratio. The video quality is pleasing enough, although details are a bit on the soft side and color is (deliberately) muted.

Two audio options are available on this release: DTS 5.1 and Dolby Digital 5.1. As I mentioned above, both are mixes of the original Japanese soundtrack. The DTS 5.1 appears to be the default, and it's a solid, if unspectacular, affair. Dialogue is always clear, though action sequences lack a dynamic punch. Optional subtitles are available in English and Spanish.

A general spot for the Asia Extreme line and trailers for The Matrimony and The Vengeance Trilogy precede the main menu. All three are also accessible via a Bonus Features sub-menu with an additional trailer for The Slit-Mouthed Woman itself.

Movie-specific extras include Cast Interview (5:03), TV Spots (1:03), and The Making of The Slit-Mouthed Woman (15:41). All three are presented in full screen with English-only subtitles.

Fans of Asian horror will want to check out Shiraishi Koji's flawed The Slit-Mouthed Woman. The central protagonists are not conceived well, but the titular antagonist is - and there's atmosphere enough to get the audience to the end point. Recommended.