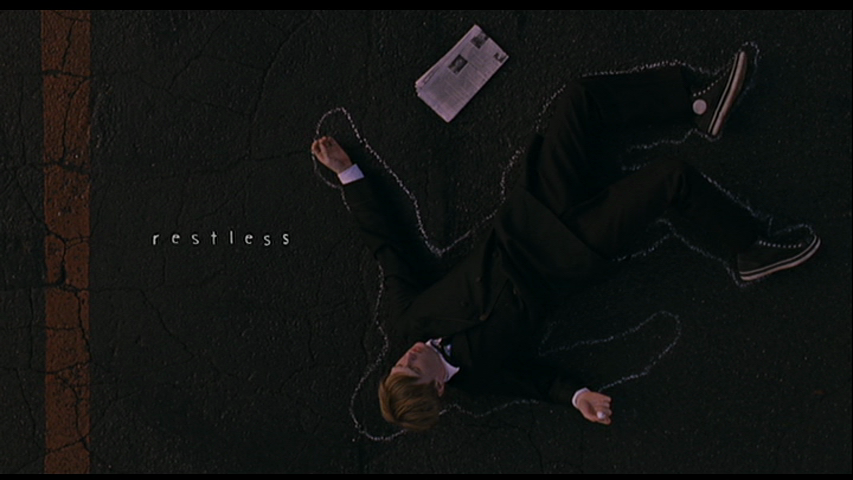 Restless is a personal and heartfelt film about finding love, cherishing it, and remembering to live life with enthusiasm, courage, and spirit. It is the story of two young people named Enoch (Henry Hopper) and Annabel (Mia Wasikowska).  Enoch is a disillusioned youth who seems to have forgotten why life is so valuable and important. He forgot to cherish every moment. Annabel is a jubilant lover of life. She helps bring a ray of sunshine into the lost life of Enoch. Her eyes show her enthusiasm, her smile exudes her kindness, and her nice laughter is filled with a solemn air of hope. Annabel has cancer and she is dying when she meets Enoch. This is the point at which I felt like crying the most. I wept.

This film has a special kind of courage in the filmmaking that is so incredibly valuable, needed, and worth appreciating. There need to be stories told like this one. We need filmmakers willing to tell stories that are capable of being genuine about topics which generally become avoided because of the real sorrows associated with them. Both main behind-the-scenes creative artists (Gus Van Sant and Jason Lew) can proclaim proudly that they contributed magnificently to that kind of work. Well done.

The entirety of the story feels very much intelligent, honest, and heartfelt. Each scene eventually feels as if it is an important piece of the whole. No scene feels wasted, with elements that could have been removed. The screenwriting captures what I imagine it accurately feels like for many young people: to be confused about our place in life and completely at a loss for what it would mean to lose out on life - on one's future - with nothing to guarantee that there will be a tomorrow.

Annabel is such a strong character. She understands that there's a strong likelihood of impending death but she doesn't let that stop her from living. It makes her even more appreciative of every moment she has left. Mia Wasikowska performs her character so incredibly well that you truly grow to care for Annabel over the course of the film. This performance stands out as one of Wasikowska's best to date in an already impressive career that will hopefully last an incredibly long time. 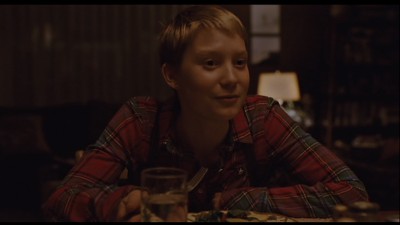 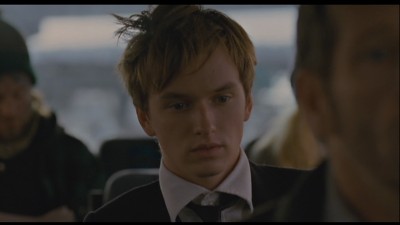 Henry Hopper (son of Dennis Hopper) also delivers an impressive performance with an incredible amount of skill at portraying a lost character who discovers what life means through his encounters with Annabel. The character Enoch has a close friend: Hiroshi. There's never enough clarification to say exactly "what" Hiroshi is... he's a ghost or an imaginary friend. I truly believe the story leans more towards considering him a ghost. Hiroshi was a kamikaze who died at an early age as a result. This character's definitely fascinating within the story as he learns to cope with his own loss (of family, of living) through helping Enoch and Annabel.

Nobody knows how to respond to the idea of anyone having cancer... let alone young people. Having a film as well-made and heartfelt as Restless and 50/50 (another important and honest artistic achievement) is not only worthwhile but absolutely in necessity. This is a film with a mission. To remind others to live out every day of life enthusiastic about the day and unafraid of the tomorrow... to live life in all its beauty. I found the film connected with me on a deeply personal level. It should be capable of connecting to others in similar ways. Gus Van Sant is easily one of those mysterious, rare, and gifted filmmakers who seems to perfectly understand how to tell magnificent stories that others would be afraid to attempt to explore. Restless is one of the best films of 2011. 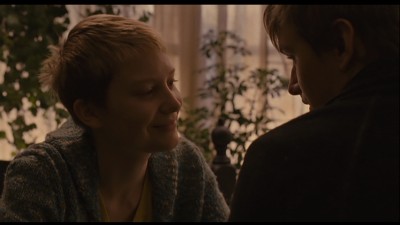 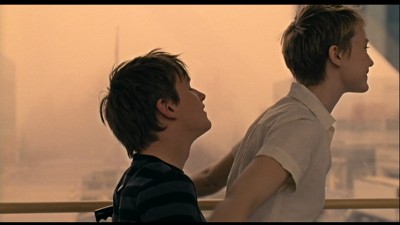 Sony Pictures Classics has presented Gus Van Sant's Restless on Blu-ray in 1080p High Definition with a 1.85:1 aspect ratio preserving the original theatrical exhibition format. Restless has received an impressive High Definition presentation which reproduces the frequently muted and carefully filmed cinematography. The colors never quite "pop" in those typical demo-disc ways and there is some film grain inherent to the image. This doesn't distract from the presentation's fine qualities and it adds to these appropriate cinematic styling's of the film. This was never intended as a film to impress all of the overwhelming visual senses of a modern-blockbuster, but like all Gus Van Sant films, there's an undeniable quality of artistry in the way the film looks that is beautiful and hypnotic. The overall presentation still remains as something quite clean and modern.

The audio quality manages to blend well with the superb picture quality. This Blu-ray release contains DTS-HD Master Audio presentations in English, French (PAR), and Portuguese. The original language track is in English. The lossless audio mix hasn't attempted to create the most dynamic aural experience possible - the mix remains unmistakably focused on the front-channels and dialogue, which is well reproduced. Surround effects are occasionally used to great affect and the ambiance of the track improves upon the experience but it simply isn't going to take full advantage of the surround possibilities. Danny Elfman's score works wonders on the film (as do these wonderful musical selections which are sprinkled throughout).

Spanish 5.1 Dolby Digital is also provided. Subtitles are included in English, French, Portuguese, Spanish, and English (SDH) for the deaf and hard of hearing.

To my immense surprise, there really isn't a single solitary extra on this release that I would consider inessential. Restless doesn't have the largest supplemental selection in some ways (the featurettes are brief interviews discussing the director, characters, actors, etc.)   yet it does seem as though everything that was compiled was done so with an intent of making it worth checking out and there is one massive inclusion on this release which is more-or-less essential viewing as something alongside the main feature. I am speaking of the Silent Film Version of Restless.

Gus Van Sant's Silent Version of Restless (AVC, 2.0 Audio, 1:16:25) is as it sounds: this is Van Sant playing with his techniques of filmmaking once more. Most fans of the filmmaker should be able to readily acknowledge that he has two sides to his films - the mainstream "made for the people" stories and those efforts which are deeply personal or experimental. These elements usually tend to blend together at times but there is no mistaking these as different filmmaking approaches. Apparently, Van Sant usually asks for his actors (on any film) to perform a scene as presented in the script and also as if there was a silent version. This method of directing is intended to garner greater performances from the actors and to capture the emotional rawness of the performances. Restless actor Henry Hopper thought it sounded like something that could actually work separately and suggested that Gus actually compile the entire silent version from the takes from this film and to craft an alternate film. Consider it supplemental but essential - this is the exact same movie as the one with all of those dialogue-heavy scenes... it just expresses things differently. I'd recommend watching the "normal" (should I use quotes?) version of Restless first but then to dig in and enjoy a silent film experience that is well worth checking out and comparing/contrasting. It does a fine job of demonstrating just how powerful the performances of the actors have been and this ultimately enhanced my appreciation of Restless. This is even complete with title cards.

Deleted Scenes (8:39) are included. There are three omitted scenes in total and the final one (entitled "Enoch and Elizabeth") was a powerful scene. I couldn't quite understand the reason behind it being edited out of the final cut of the film. The script seemed to call for a moment like the one highlighted here and I would have considered it as one of the finest moments in the already excellent movie. I wish that sequence had been left in. The other two scenes are essentially extended moments and they clearly dampened the flow a bit - one has an offensive prank and the other simply feels like an unnecessary extension. 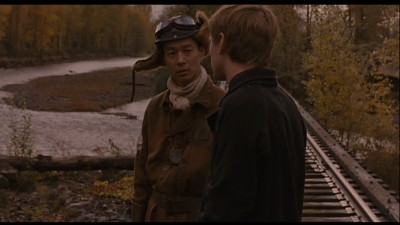 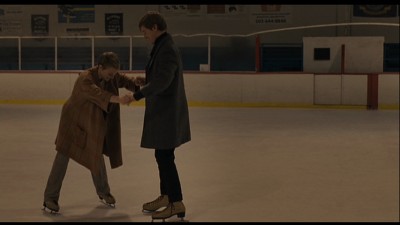 There are five featurettes on this release. These explore the creation of the film, the script, the themes, and the character relationships between Enoch, Annabel, and Hiroshi.

Enoch & Annabel: Our Love (6:20) and Enoch & Hiroshi: The Best of Friends (4:06) discusses the relationships of the characters. Gus Van Sant: Independent Voice (6:04) admires the work of the film's accomplished director.

Being Restless (9:50) works as an extended creation piece with more details on the film's origins than the other featurettes.

Coming to Life: This is Restless (6:04) is a discussion between producer Bryce Dallas Howard and screenwriter Jason Lew. The pair discusses how the project was made and thematically how the story was an uplifting one meant to inspire others about the value found in remembering the importance of living one's life (and specifically how this was important for Enoch's character). 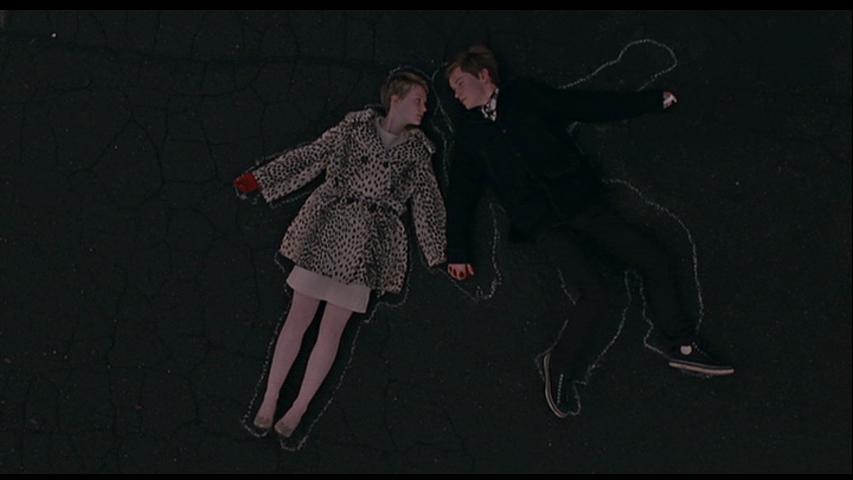 Restless is one of the best and most important films made in 2011. The film struck a deeply personal chord with me and it will be one that I can cherish and remember fondly. There is no question that this is a story that absolutely needed to be told. I only wish more viewers would be interested in seeking out this film. I hope this review has inspired some needed attention towards the already under-seen and under-appreciated Restless. I hope that the right audience discovers this gem and that viewers can take the beautiful message of the story to heart.  This is one of Gus Van Sant's finest directorial achievements and a remarkable debut worth admiring by screenwriter Jason Lew.