Please Note: The screengrabs used here are from the standard-definition DVD released in 2007, not from the Blu-Ray. 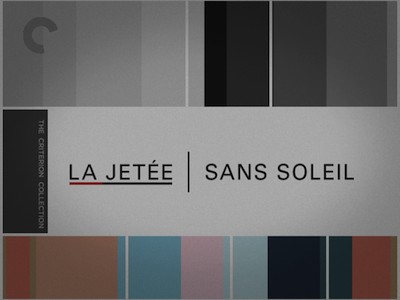 Chris Marker is, undisputedly, a unique and gifted filmmaker. His point of view is unlike any of his contemporaries, and over the years, he has continued to work at his own pace and pursuing his own interests. I am sure there was a time when he could have chucked it all and pursued some big deals, but at this juncture, he has so far resisted. Marker is still alive, and the 90-year-old artist is still working, his last published credit being the updated version of his CD-ROM Immemory in 2008.

La Jetée, Marker's most famous film, like so much art, was conceived under seemingly unsurpassable restrictions. Marker could not afford a movie camera, so he made do with the materials available to him. La Jetée is a short film put together with still photographs and audio narration recorded by the writer/director on a tape recorder. The fact that the 27-minute visual narrative that emerged is so complex and daring is something akin to a miracle.

The story of La Jetée begins with an unforgettable incident in one boy's life. He witnessed a man die at the airport when just a child, and he was never able to shake the image from his mind. As an adult, he survived World War III only to end up the guinea pig in a time-travel experiment. The man (Davos Hanich) is an ideal candidate because his fixation on that one moment gives him a focal point for his journey. During his first forays into the past, he finds a woman (Hélène Chatelain) who was also at the airport during the death scene, and they develop a relationship. It's only when the man goes forward into the future that he realizes his captors have different ideas for how they plan to use him and the technology he is helping develop. 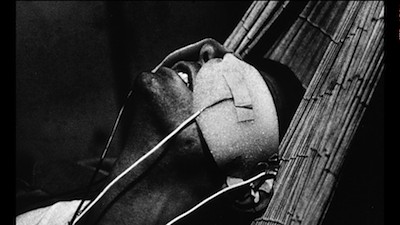 Plot-spotters might recognize this tale as the inspiration for Terry Gilliam's 12 Monkeys. As much as I like that later film, there is something more elegant about La Jetée. It is far simpler and yet far more emotional. The scenes of the man and the woman enjoying their dates are understated and direct, reminiscent of Luchino Visconti's Le notti bianche. Marker avoids the usual goopy sentimentality of love stories by allowing for the romance to be an unexpressed tension interpreted by the audience. What exactly is the man doing in pursuit of this love he can never have? What does it mean for his greater mission?

Despite the lack of movement or dialogue, La Jetée is never stagnant. It is like a living comic book. The images of Paris post-devastation are awe-inspiring, and the art direction for all the future scenes makes use of cramped framing to work around the limited budget. Yet, it never feels as if Marker is cheating. The ingeniousness of the solution is that the future is a time of burial; the open skies of the past are just that, a thing of the past. All of our tomorrows are distant and shrinking as mankind destroys itself.

The movie has a variety of interpretations. It ruminates on war, madness, and mortality. Which facet you choose is important will dictate how you relate to it. You may choose to explore all at once, even. It's all there. 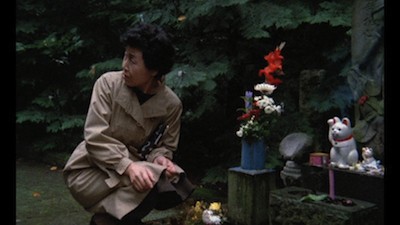 Marker released Sans Soleil twenty years after La Jetée, following a period of primarily focusing on politically motivated filmmaking. Thematically, Sans Soleil is similar to La Jetée in that it deals with memory, time, and the consequence of history. Its title, which translates as Sunless, refers to an interlude in the film when, after looking at some footage of Iceland, Marker imagines a science-fiction movie he might one day make. It is one where a distant traveler will come to Earth and be surprised by the inconceivable injustice that exists within an otherwise blessed society. The director immediately dismisses the movie as one he will never get off the ground, but it's a tangent worth exploring nonetheless.

I say that the director dismisses the idea of Sunless, but in reality, the narration in the film is amorphous. It folds letters from world traveler Sandor Krasna into Marker's visual collage. The narration is actually read by women--Alexandra Stewart in English, Florence Daly in French--effectively abstracting the point of view, which is then further obscured by the fact that Krasna is really Marker himself, hiding behind the guise of a fictitious cameraman. It's a playful conceit for a film that embraces the elasticity of experience. Sans Soleil isn't about any one thing. It is a global journey where the route is dictated by human caprice and random encounters. 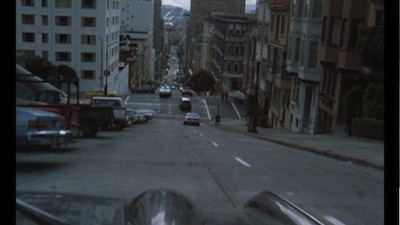 Most of what we see takes place in Japan. While shooting AK, his portrait of Akira Kurosawa, Marker filmed street scenes and spiritual rituals and grappled with the incongruities of Japanese culture. In many ways, the old traditions still exist, but in many other aspects of life, new ideas, invigorated by advertising and technology, are taking shape. For Marker, most activities reveal a search for a sense of self, of trying to find a place of belonging in the grander scheme of things. What he sees in Tokyo brings to mind the revolution in the West African nation of Bissau, as well as the memory games of Alfred Hitchcock's Vertigo. He visits both through archival footage, but he also travels to San Francisco to tour the real locations from Hitchcock's mind-bending thriller. There are also the aforementioned detours to Iceland and brief stops in France.

The sum of all these parts is one that can be a little elusive in calculation. Sans Soleil is a bit like one of those see-sawing paperweights that pushes brightly colored water back and forth inside its plastic casing, creating the illusion of a rolling tide. Marker purposely wants to the movie to slip through the viewer's grasp, to force us to adapt to the changes. His movie is about how experience can't really be recorded, halted, or held. Life is ever changing, and that is why our search for self never truly ends. At the same time, memory can be abstracted and preserved and reevaluated. Marker illustrates this by showing documentary footage run through an electronic synthesizer. People are turned into blobs and shapes, yet their meaning isn't removed. They are no longer solid objects, but they still exist.

The end product here is more essay than documentary, a collection of impressions rather than an overly sculpted narrative. Marker rarely imposes meaning on his footage, instead choosing to juxtapose words and images in a way that draws the watcher into the cinematic flow. He does this with an impressively light touch. Despite the seriousness of much of the topics explored, Sans Soleil remains entertaining throughout, creating a sense of mystery that leaves us wondering where it will all go next. 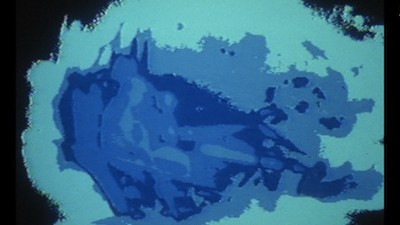 Video:
Criterion's 1080p Blu-Ray transfers for the two movies are amazing. Both are presented at a 1.66:1 aspect ratio. La Jetée is in black-and-white and looks remarkably crisp. The still images have strong values, with excellent resolution allowing viewers to savor every carefully manicured detail.

Sans Soleil is in color and the high-def version maintains the journalistic look of the material. Footage is drawn from a variety of sources, but the quality of the resolution remains consistent. The image has been nicely cleaned up, but without sacrificing the natural appearance of the original source.

Sound:
Both films receive dual uncompressed mono soundtracks, presented in both English and French with optional English subtitles on the French tracks. The sound quality is crisp, with strong tones and no distortion.

Extras:
Criterion has carried over all the extras from its 2007 edition of La Jetée/Sans Soleil, including a thick 44-page booklet featuring critical essays and material from Marker. There is also one addition.

The bulk of the extras explore the influence of Marker and his further work, a somewhat necessary endeavor when you consider the timeframe the two main features span as a duo. An interview with filmmaker Jean-Pierre Gorin gives us some insight on Marker's craft and his place in filmmaking. Gorin is a fitting choice, as he and Marker both spent much of the 1970s making radical political films. Another filmmaker, Chris Darke, pays tribute to Marker in the short piece "Chris on Chris." This was made in 1999 on the occasion of a museum retrospective in England. It includes interviews with director Michael Shamberg, who collaborated with and was influenced by Marker.

The idea of influence is approached on two separate segments of the French TV series "Court-circuit (le magazine)." One looks at David Bowie borrowing from La Jetée for his Mark Romanek-directed video "Jump They Say" in the early 1990s, and the other explores how Alfred Hitchcock's thriller Vertigo was an inspiration for Marker in both La Jetée and Sans Soleil.

There is also one additional extra presented here that was not on the DVD: a short film called "Junkopia." This six-minute piece was made by Marker and his colleagues during the filming of Sans Soleil, and it documents the public art that was on display in the Emeryville Mudflaps in California. It's mostly footage of the junk sculptures set to ambient music.

FINAL THOUGHTS:
Highly Recommended. The two films presented here are arguably Chris Marker's most famous features. The 1963 sci-fi puzzler La Jetée is an influential short subject, put together using still photographs and a whole lot of imagination; its younger sibling, Sans Soleil, released twenty years later, continues the director's obsession with time, memory, and the cinema. His visual collage explores the impacts of events past and present on the ongoing process of human evolution, including the resonance of personal expression. Both are entertaining intellectual games that continually reveal new interpretations and ideas. 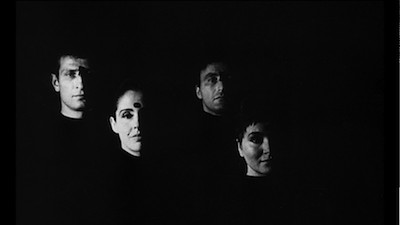