Charlie Brown and his Peanuts gang have been a mainstay of not only the newspaper funny pages but also holiday entertainment for generations. The 1965 animated television special A Charlie Brown Christmas remains a perennial yuletide favorite to this day, as does It's the Great Pumpkin, Charlie Brown. These and other signature Peanuts holiday specials have made their way onto home video in various incarnations for decades. The latest variant is this year's fantastic blu-ray combo pack reviewed for DVD Talk by Randy Miller III here. One of the most magical elements of these early cartoon ventures for Charlie Brown, Snoopy, Sally, and the other Peanuts kids is the timeless light jazz score of Vince Guaraldi - light, whimsical, and vintage.

Those early holiday Peanuts specials are the way to go for casual fans. Last month, likely to cash in on the blu-ray box set of A Charlie Brown Christmas etc., Warner Brothers released another DVD-only installment of their Happiness Is . . . Peanuts series with Snow Days. I don't want to knock the content of Snow Days; it's comprised of short cartoons that suit Saturday morning-styled kids entertainment fine enough. However, the programs collected here lack the spark of their predecessors - not to mention Guaraldi's presence. Plus, like other cartoon ventures on DVD, Snow Days has a "cash grab" approach, with an anemic 47 minute total runtime and no significant extras. Long-time Peanuts fans really should be treated better with an actual series collection of The Charlie Brown and Snoopy Show (you know, like studios do with most regular TV series). Oh well. Let's move on to Snow Days's content . . . 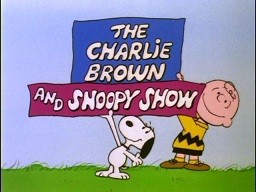 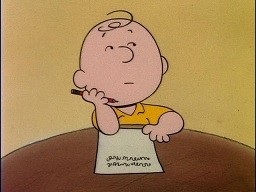 The first of the two shorts on the disc is The Charlie Brown and Snoopy Show, Episode #18 (22:26). This show appears to have been a relatively short-lived series from the mid-1980s, mimicking the meandering approach of earlier cartoon adventures with these characters. The end credits do list creator Charles M. Schulz as the writer, so at least the program has a "legitimacy" to it. The 22 minute episode is broken into three shorter stories (perhaps to accommodate commercial breaks on television?): The Play, Sweet Babboo!, and Snoopy's Story.

The Play has Lucy deciding to direct a new Christmas play, with Charlie Brown given the role of principal fundraiser. Snoopy is utilized well here, as Charlie Brown and Sally put the beagle to work helping them sell Christmas wreaths. The story is amusing - but it feels like a retread of A Charlie Brown Christmas. Sally meeting a boy named Harold Angel (a pun off the Christmas standard "Hark! The Herald Angels Sing") serves as the link to a second story, Sweet Babboo!, a less interesting (and shorter) story set during Valentine's Day. Snoopy's Story is even briefer - and sees Peppermint Patty submitting a theme about Charlie Brown's dog. This is probably the most successful of the three stories, however, if only because of its focus on the playful Snoopy character. 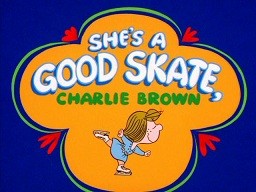 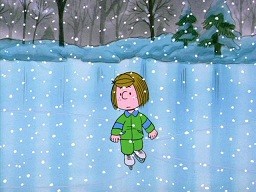 The second program on the Snow Days disc is the 1980 special She's a Good Skate, Charlie Brown (24:23), which sees Peppermint Patty take center stage. It seems Patty has taken on ice skating, with Snoopy serving as her coach. She's motivated by an upcoming competition - and she seeks help from her friend Marcie in the creation of a costume.

She's a Good Skate, Charlie Brown is one of the more linear Peanuts cartoons I've seen; in other words, the focus remains on Patty and her story arc alone, with other Peanuts characters serving minor roles. It has a good message for kids about perseverance and competition. I also liked the score here, which borrows heavily from classical pieces like The Nutcracker and Beethoven's Fifth. In addition, I agree with Ian Jane, who has already reviewed this disc for DVD Talk here: Woodstock is used quite effectively in the story's climactic scene. This is a fun little story.

So, overall, Happiness Is . . . Peanuts: Snow Days offers some fairly entertaining - albeit far from essential - Peanuts cartoon entertainment. At a scant 47 minute runtime, though, this disc just doesn't have enough content for me to recommend except to the most devoted fans of Charlie Brown and his gang. 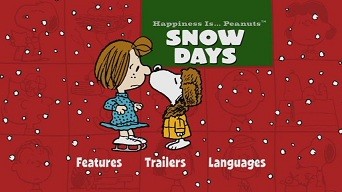 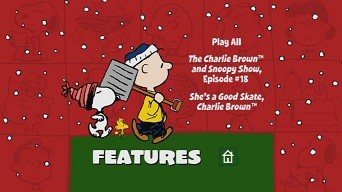 The cartoons on this disc are presented in full screen 1:33 aspect ratio that Warner Brothers states "preserve[s] the aspect ratio of their original television exhibitions." The animation is simplistic, especially for the episode of The Charlie Brown and Snoopy Show. The colors seemed more strong and vivid on She's a Good Skate, Charlie Brown.

The lone audio track is Dolby Digital Mono, which is to be expected given the age and television origins of these two programs. Both sound clear, though, and dialogue is always easy to follow. Optional language tracks are available in Spanish and Portuguese, while optional subtitles are available in English, French, Spanish, Portuguese, Mandarin, and Thai.

An ad for Happy Feet Two: The Video Game and a trailer for Happiness is Peanuts: Friends Forever precede the main menu. A Trailers sub-menu offers access to additional trailers for Peanuts Holiday Collection and Santa's Magical Stories.

I'm recommending Happiness Is . . . Peanuts: Snow Days mainly on the relative strength of the short She's a Good Skate, Charlie Brown. However, the disc's overall content runs only 47 minutes, with no significant extras - making this DVD solely for the most devoted fans of Charlie Brown and his gang. Casual fans are best pointed toward the current holiday collection of iconic specials.