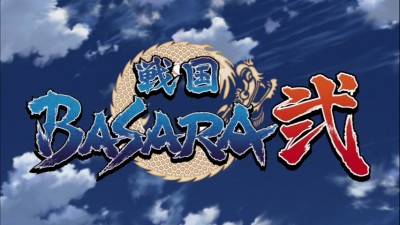 Sengoku Basara is an anime adaptation of a video game.  If that instantly brings to mind a series that focuses more on creating "intense" action sequences over telling an absorbing story then that's probably because this is the general indication of what it means to bring video game characters into some other artistic form. Most viewers aren't going to tune in expecting mind-boggling poetry or anything of the sort. This element rang true regarding the first season of Sengoku Basara but isn't necessarily the end result of this new second season outing.  The series doesn't change drastically but it does make enough attempts towards refining the storytelling that the overall experience is decently improved.

The basic setup of Sengoku Basara features opposing samurai-warriors on different sidelines of war with various group attempts to overthrow the others. Many are fighting for peace. Some are merely fighting to fight. The end-result is utter chaos in a war-zone filled with many casualties. Loyalties are formed. Companionships tested. The samurai warriors in Sengoku Basara are faced with learning to understand the reasons behind the samurai codes and what the purpose is of being a warrior. In other words, this season has the characters ask an overarching question of "what am I fighting for"? It leads to some fascinating philosophical ponderings.

The best thing about Sengoku Basara remains consistent: incredible visuals and production values. The animation is sleek and sophisticated. Backgrounds are not perfectly developed, but there's great texture with bold colors and interesting designs that this isn't a detriment. The shows stylized uniquely and it will appeal to anyone hoping to experience a colorful animated epic.  The big issue with the show is that even in the second season, after the mixed-results found within the first outing; Sengoku Basara still represents a style over substance approach despite dealing with historical issues. There's no question that this show doesn't ever manage to provide enough characterization to make the entire show entirely successful from start to finish. Maybe this won't aggravate everyone but it was certainly unfortunate. Sengoku Basara was more concerned with flashiness than depth during season one and the same holds true for the second season (despite impressive improvements in overall storytelling). 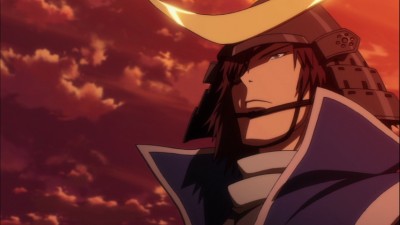 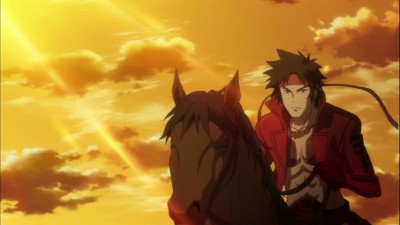 The second season of Sengoku Basara isn't going to win any new fans. I might as well begin by saying that. If you watched the first season and felt it wasn't entirely worthwhile then an unusually high possibility might just exist that you won't enjoy the second outing either. It's essentially more of the same: extremely formulaic, action-heavy, and with emphasis on the visuals over the story. It might be better than the first season (in fact it definitely managed that aspect), however, that doesn't mean it's some form of operatic masterpiece. Not at all!

The series blends together elements of actual history with fiction. It portrays real historical figures from Japanese legends (the kind of history backdrops that won't be as familiar to a huge percentage of the viewing audience in North America) as well as places that really do exist, where massive war-related events occurred. The good thing about this aspect of the series is that it dutifully attempts to bring some form of historical perspective to the table. The downside is that it really doesn't expand upon these ideas. Having it set in a historical perspective seems to mainly exist to serve a fundamentally needed backdrop of the story, and that element of the show disappoints.

There are so many side-characters introduced in the course of the show that it takes away time from the central characters as well. This becomes a problem because viewers aren't acquainted enough with the main leads to feel entirely involved in their stories and that brings the entire experience down a few notches in quality as well.

The show can easily become confusing at times. There is a certain element of the show that doesn't seem to feel emphasized correctly in the way any well-told story should be. When a viewer is continually made to feel uncertain of a number of events or characters then there might be a good chance that the storytelling has not been streamlined enough to be well understood by the viewing audience. With Sengoku Basara, It's an issue because of how many times the series jumps back and forth between different characters and the story revolves on a frequent basis. This could work. It merely doesn't. The writing isn't good enough to properly convey all of the ideas the writers attempt to relay to the audience. 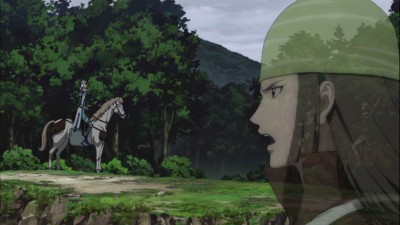 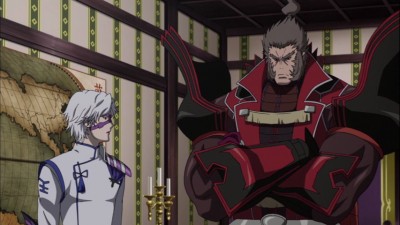 The main reason I can possibly see anyone thoroughly enjoying Sengoku Basara is if they can manage to tune out these storytelling problems and focus only on the lushness of the beauty found in the animation. If you can manage to overlook story flaws this series might be worth seeing for some. You'd also have to ignore the fact that characters can feel flat or underdeveloped and that story is always considered second-fiddle to action or philosophical tones. The biggest issue I had with the philosophical aspect is that these moments seemed to feel as though the words came from the script-writers instead of from these characters.

Sengoku Basara will primarily appeal to action-anime fans looking for something just a wee bit different from the typical action-fare. If for some reason Sengoku Basara turns out to be a show that sounds especially interesting then by all means give it a rental. It sort of seems like this series is made with that particularly action-heavy anime fan-base in mind.

Sengoku Basara arrives rife with storytelling flaws but that isn't an indicator that the entire series isn't unique or ambitious. There is at least a decent degree of merit behind Sengoku Basara's underwhelming videogame based approach to stylistic action anime. 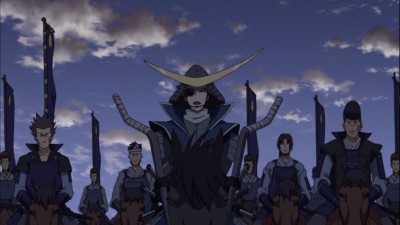 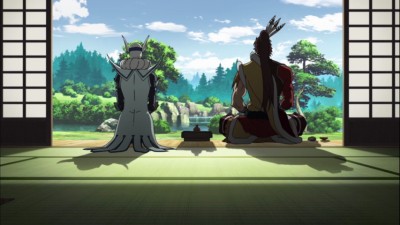 Sengoku Basara: Season 2 is presented in the broadcast aspect ratio of 1.78.1 widescreen, and with native 1080p High Definition picture quality that is well-reproduced utilizing the great possibilities presented by using the Blu-ray format.

This is an incredible Blu-ray release on the technical side of things. The image quality left me feeling speechless. The colors are outstanding and the sheer level of detail and clarity impresses. This is undoubtedly one of the reasons the show works as well as it does.

Sengoku Basara: Season 2 features a Grade A presentation from start to finish. It doesn't even come close to disappointing. Sengoku Basara fans will undoubtedly feel satisfied by the experience and will recognize that Funimation has excelled again with an impressive release that matches the high-quality expectations created from the first season of the series arriving on Blu-ray).

Funimation continues to offer two audio choices to viewers: an original language Japanese dub (with English subtitles) and an English language dub. Both choices are presented with notable lossless high definition audio encodings featuring Dolby TrueHD codecs. For those who choose the English version there is a decent 5.1 surround sound track. The Japanese track is available with only 2.0 audio but it remains equally strong in clarity by utilizing a lossless format.

The images featured in this review of Sengoku Basara: Season 2 are from the DVD discs included in this Blu-ray/DVD combo pack release. 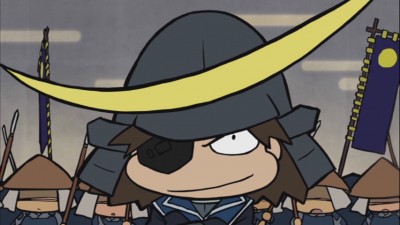 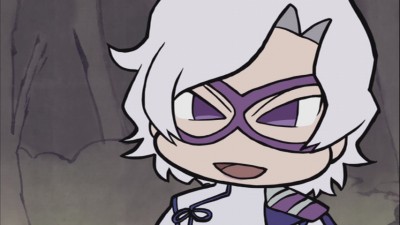 Bonus features for the second season of Sengoku Basara are not all that different from what viewers found on the first season set. It's a similar combination of bonus features. The first season featured seven short mini-episodes of a comical side series, and the second season features seven more follow up shorts (the new anime series is entitled: "Sengoku Basara II: Katakura-kun). The main idea is to highlight some of the characters in a comical, silly, and altogether different style than the main series ever has a chance to highlight. It's different, quite so, and will not necessarily remind viewers of the main experience. The big reason to watch these short cartoons is because of their comedy quotient. It's a humorously not-too-serious side experience with chibi-style designs and characterizations. I enjoyed these the first time around and I thought they were well-done for the second season too.

Staff Commentaries are included on Episodes 6 and 12 of Sengoku Basara: Season 2. These might appeal to fans of the English-language voice actors but these supplemental features remain inconsistent as commentaries containing a 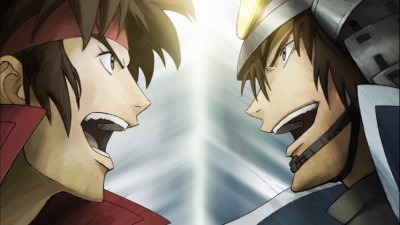 Sengoku Basara: Season 2 was a definite improvement over the first season outing. It had greater emphasis on the characters (even though characterization was still underwhelming), gorgeous animation matching the preceding season, and the kind of samurai action that an increasingly large percentage of the viewing audience undoubtedly began to expect to find. Things could have been even better - for sure - but this was a well-made season of action, adventure, and intrigue nonetheless. Fans of season one will want to consider a purchase. Those who didn't enjoy the first season won't find things different enough to purchase the series and are advised to consider this a rental at best. Either way, Sengoku Basara is the type of the series that should be given a test run before making any purchasing decisions. Funimation has done a magnificent job with the presentation though (both in PQ/AQ and in providing fans a Blu-ray sized artbox that can hold both seasons together). It's a great looking set that will please those who decide that Sengoku Basara would be worth adding to their anime collections.