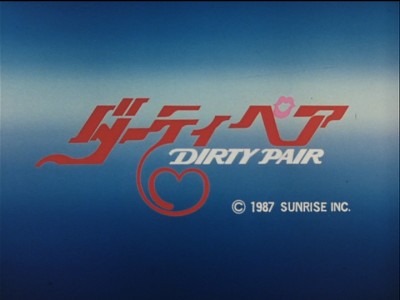 Dirty Pair is a fun, action-packed, and surprisingly well made classic anime series. It focuses on two central characters, Kei and Yuri (known to all as the "Dirty Pair" or "Lovely Angels"), who are kick-butt action-heroine girls who work for the World Welfare Works Association. This special organization takes on tasks to bring down the baddies and help return intergalactic order within the universe by hiring out (as the organization describes them) "trouble consultants". There doesn't seem to be a group as well known and established as the Dirty Pair and with good reason.

Kei is a redhead with a tough attitude and a firm compassion for others. She tends to take things more seriously than her partner does when it comes down to making sure the mission is completed as it was planned. Yuri is a blue-haired, comical, and sometimes more joyful girl. She sees a positive in a situation when Kei simply can't seem to find one. The lovable anime duo works together and utilizes their unique individual strengths towards any of the many missions they are sent on. It's these character interactions that drive the show into great territory and which separates it as a distinctive, enjoyable, and ultimately heartfelt story worth watching. It would be understandable for a viewer to sit-down for a viewing of Dirty Pair with some apprehension about what this is going to actually be like as a show. There have been so many "girls with guns" anime productions and most of them simply fail to grasp anything truly unique or interesting enough to seem thoroughly worthy of the time it takes to invest in watching them. Well, Dirty Pair isn't like all the rest. 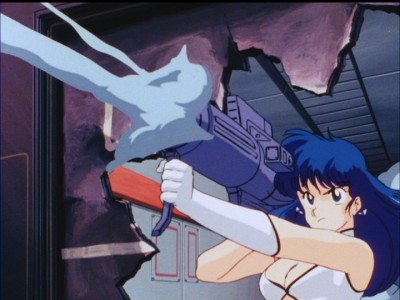 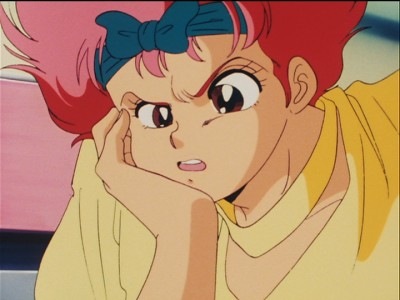 The characters make the show a wonderful joy and the writing is several notches above most of those other, similarly-themed, creations. Where other anime series have faltered in relying on unnecessarily heavy fan-service, little or no characterization, and weak animation, this series offers an almost entirely different view of the genre. One watches Dirty Pair because it has wonderful characters, plots, moving storylines, and absolutely beautiful hand-drawn animation. It also doesn't hurt that the show features an interesting opening and closing theme song (and accompanying animation). There isn't a downside attached to viewing the show... unless you can't stand non-serialized television.

The basic setup of the show is that each episode features Kei and Yuri being assigned to a mission that will be solved by the end of the episode. The story is never complex, always simplistic, but the area of storytelling that is covered is always well-told with solid scripting, great characterization, and fun ideas.

Each episode is like a mini-movie with a story that has a beginning and an end. This means that Dirty Pair is an easy series to watch a random episode of and still remain interested in. It satisfies fans looking for a worthy storyline without also requiring a huge investment be made. The show is lighthearted and a positive delight from beginning to end. For fans of classic-era anime series, this is sure to entertain. It features great craftsmanship on every level and a unique style that sets it apart. Enjoy the direction, animation, music, and storytelling it offers. 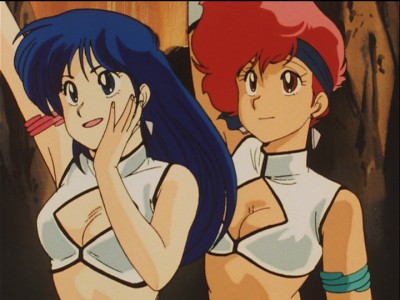 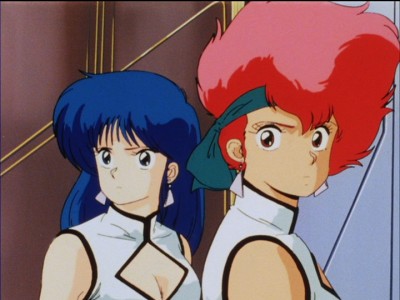 Nozomi Entertainment (a RightStuf company) presents the original Dirty Pair OVA episodes with remastered video that was previously exclusive to the Japanese re-releases on DVD. It's nice to see that the company has gone to some worthwhile length to help bring North American fans a presentation that is worth our time. The image is certainly upgrade-worthy with a nice film-like feel for the anime. The show has better definition than expected given the age of the source-material and it properly presents the animation-style. The animation is so wonderful to behold here. There aren't any prevalent compression issues at all. This set spreads the ten episodes across three discs. Dirty Pair remains in its original television aspect ratio of 1.33:1 (full frame).

The audio doesn't sound bad at all. Given the show's age there isn't a lot to be expected from a television mix. However, just because the sound design isn't as stellar as modern productions it doesn't mean it has to sound completely underwhelming. The dialogue is a notch easier to understand than expected. It is clean and clear. The music sounds nice on this release too. A word on the dubbing: the English language version is one of the weaker dubs I've heard and I wouldn't recommend it. The original Japanese audio is the way to go. The English subtitles are easy to follow and the series has been well-translated.

Not many extras can be found on this release. The only included bonus materials are clean opening/ending credit sequences, translation notes, U.S. Trailer, and trailers for other DVD releases from Nozomi Entertainment. 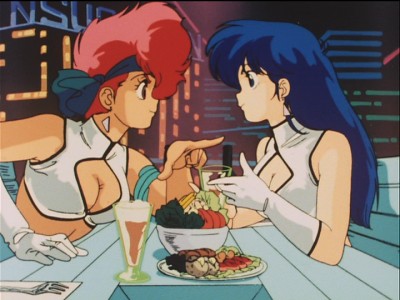 Dirty Pair was way more fun than I was expecting. It's definitely considered a classic anime series with good reason. The characters are a joy and the stylistic aspects of the production excel far beyond any ordinary series. This DVD rerelease by Nozomi Entertainment contains an impressive presentation and it is well worth adding to any anime fan's growing collection.   Highly Recommended.