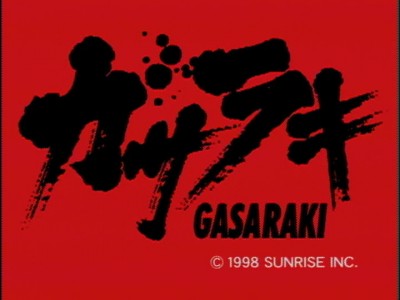 Gasaraki isn't your average anime series. The series is actually far beneath the average quality one might expect from any given anime out there and it manages to stay that way from its first episode to the last episode of the entire series run. If you happen to see the series, it's possible that you will be constantly wondering what is going on and why any of it is supposed to catch your attention because very little of it makes actual sense. Gasaraki ends up being quite dense and not in a good way... it's one of those total head-scratchers in anime. Not too thrilling that way.

The basic information you need to "sort-of/kind-of" follow the show is that the central characters (as if...) are capable of using strange mystical powers to summon Gasaraki, a monstrously huge force with scary powers capable of bringing about insurmountable destruction. There are an unbelievably high number of bad-guy villains (notice my distinction) who are determined to utilize the Gasaraki to bring about the end of Japan. Can the mecha pilots who have the odd powers that help them to call out the Gasaraki somehow work together (and with others) to protect their land and ultimately save humanity?

That is the over-riding question (can humanity be saved?), but there are so many plotlines sitting on the side and making the show more complicated to even try and follow. Imagine the series as a cross between sci-fi end-of-the-world and standard anime mecha or something with too much technical talk that makes little sense (either the dialogue has been researched incredibly well or the show's writers are blabbering character lines with little idea of what they are talking about), and that makes it a strange combination that never manages to click entirely.

The story is way too convoluted to make much sense out of it. Therein lays the biggest problem with Gasaraki. This series becomes so confusing at times that to even watch the show feels like something headache-inducing.  This series is flawed on so many different levels. Most viewers will feel as though they need a pen and paper to jot down notes about the plotting to see if they can even make sense out of it. I doubt anyone can fully understand it either, and that ridiculous notion makes it even more difficult to imagine anyone sitting through this entire show.  Anime isn't meant to be a chore. The art form should be able to entertain, enlighten, and educate... but the point isn't supposed to include creating a completely bored and eternally confused audience. 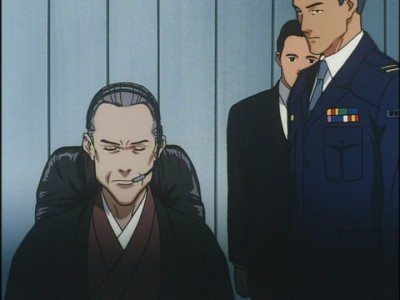 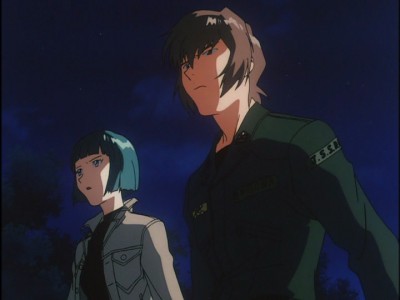 One of the main issues is that there are far too many supporting characters. The fact that there is constantly a new group of characters being introduced into the multiple plotlines makes it more challenging. The obvious issue here is that there are so many characters being introduced that it conflicts with an audience member's ability to have any idea who the new characters are. I was confused myself, and it was frustrating. I was constantly wondering who these characters were and why I should feel invested in the storylines if I don't have a clue as to who is who or what exactly connected these characters to one of the ongoing plot-lines in the first place.

The behind-the-scenes featurette on this release even helps sum up the character issue nicely. Some of the supporting characters over a short span of episodes are given focus here by the character designer, who shows viewers early sketches of the characters. As the sketches of supporting-role characters continue to be presented, abundance becomes apparent, which is something that ends up helping to signify the over-ambitious nature of the production. Too many characters might as well indicate too few of them. In the long run it equates to meaning the same thing: not enough meaningful depth has been given to the characters viewers are expected to get to know by viewing Gasaraki. When you have upwards of twenty new characters appearing the show might just need to slow down a bit and give time for the other series characters to make an impression.

The writing is a jumbled mess with too many political undercurrents that seem to lead the show nowhere. The upside was the philosophical tones, which were well-developed and quite worthy. These moments are not well-divided amongst the episodes though and almost seem to show up whenever the random flow of the show's plotlines seems in need of some added ideas.  While most of the plot-heavy moments are boring, repetitious, and confusing it was nice to have the show question ideas about

Animation found mixed results. The character designs are pretty strong for the lead characters, but supporting roles began to blend together at some point in the series course. There were too many characters that didn't seem distinctive enough to tell apart and it made it confusing to tell who was who.

The background designs and layout artwork can have the same effect the character designs had. I was never impressed by the art of Gasaraki but it was decent-enough as far as 90's productions go. The series was produced during a transitional period where styles were beginning to change more and feature sleeker designs.

Gasaraki could have been a good series. It had some interesting ideas, certainly, but where it was unsuccessful was in executing those ambitious ideas. The writing was poorly done, except on the rare occasion the focus was on philosophy over politics or disappointing, weak characterizations. Most of the episodes were too broad in scope and the plotlines felt as though they were adding up to nothing special. The concluding episodes did little to sway my opinion of this and that is unfortunate but unexpected.  Gasaraki simply never works as well as it would have liked to in the end. 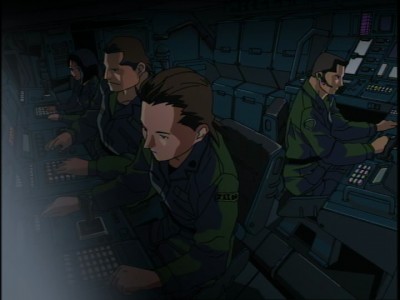 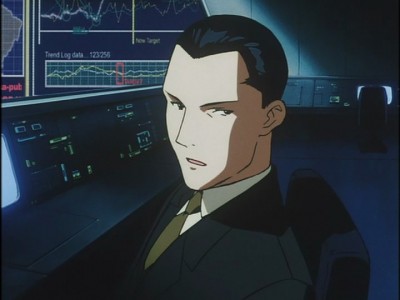 Gasaraki arrives on DVD with notably dated but decent transfers. The show is presented in its original 1.33:1 (4:3) full frame aspect ratio. The colors are dull and muted but the compression wasn't terrible - only slightly below average, and it had decent detail. It's an underwhelming, uninvolving, and disappointing presentation but the series holds up well enough in the picture quality department for something produced during the 1990's that hasn't received restoration.

The audio quality is average. The series is presented with English and Japanese language dubs and both offerings feature sub-par voice-acting and 2.0 Dolby Digital presentations that never manage to make the show work any better. These sound mixes never add much and are merely capable of delivering decent dialogue reproduction. English subtitles are provided for viewing with the Japanese dub and on-screen text translations have also been included.

The only inclusions are clean opening/ending credits, a brief behind-the-scenes video focusing on early design artwork, and trailers for other anime releases by Nozomi Entertainment. 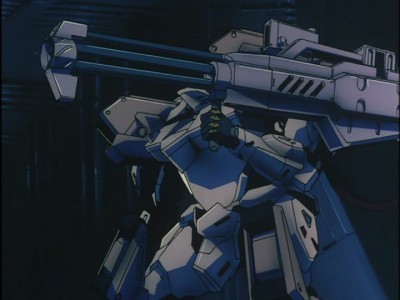 Gasaraki was a muddled mess of science fiction, mecha, existentialism, politics, and more. It's ambitious but it doesn't ever grasp what makes good storytelling work. Instead, characters are constantly introduced (with little emphasis given to the supposed leads), and dialogue is quite irritating. This is one of the most convoluted anime series I have ever seen. If that sounds like something you would like, give it a whirl, but everyone else should consider this one that has "unavoidable disinterest" written all over it.