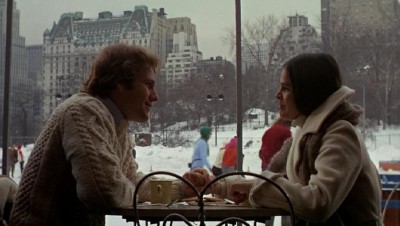 Holy cow, what a dreary time the 1970s must have been if Love Story was the leading romantic film of the decade. And I'm not talking about the fact that the female lead dies in the end, either. (Not a spoiler. The first lines of the film tell you this is going to happen.) I'm talking about the whole thing.

Ryan O'Neal (Paper Moon) stars as Oliver Barrett IV, a rich kid whose family is so loaded, they once paid for a building at Harvard. That building is still there, and now that Oliver and his moppy hair are in attendance, he has to contend with the horrible reputation of being a good-looking legacy student. Boo-to-the-hoo. Daddy expects too much of him. Life is hard. Blah blah blah. This failure to sympathize isn't just my way of thinking, it's also the position taken by Jenny Cavalleri (Ali MacGraw, The Getaway), the sassy librarian from the wrong side of the tracks who seduces Oliver by calling him "preppy" and saying the word "bullshit" in front of kids. She's a firecracker, he's a macho jock, and they tease and dare one another to fall in love, to let down their defenses and ignore class prejudice and live together. Oliver III (Ray Milland, The Lost Weekend) disapproves of their rash decision to get married, and so he cuts off his son, forcing the newlyweds to make their own way in the world.

At first, the going is tough, but Oliver works his way through law school while Jenny's dreams to be a pianist go on hold. It's all worth it once Oliver graduates. He still can't afford a haircut, but they get a new apartment. Oh, and Jenny also gets a terminal illness! Wa-hey! To give you some idea of what gutless treacle Love Story is, they never tell you exactly what is wrong with Jenny. Why deal with pesky details like diagnoses and symptoms? Common wisdom is that it's leukemia. I'll be honest, she doesn't look very sick to me. The sequel eight years later focused on Oliver moving on with his life, but I think that is a mistake. The real story is in how Jenny faked her death to get away from her jerkbag husband.

Love Story has long been on my list of need-to-see films. Now that I have seen it, I'm seriously contemplating reevaluating that list. Just what was my criteria anyway? The film was released in 1970. It was directed by Arthur Hiller (The Americanization of Emily, Silver Streak) and written by Erich Segal, who at this point, despite having written Yellow Submarine, couldn't get arrested for writing if he'd hit a cop on the head with his typewriter. Love Story is him falling ass-backward in butterscotch (to paraphrase Patton Oswalt), turning his spec script into both a successful film and a best-selling novel. His writing is legendary for its schmaltziness, but hey, that's why I actually wanted to see Love Story. I've been known to succumb to schmaltz in my time. I adore a good weepy romance.

More's the pity that Love Story would have been better off being billed as a horror film. It embodies all the worst qualities of the 1970s. It's not a great romance, but rather the story of two self-involved people who find a comfortable groove appealing to one another's narcissism. He's got a martyr complex, she needs someone to beat up on. He suffers for her, she makes him suffer, he makes her suffer in return. It's a passionless affair, and if you need to know how lacking in steam this motion picture is, it's rated PG for "a love scene." That's right: love scene. Singular! These two are too busy enjoying the sound of their own voices to shut up and lock lips. Segal keeps them talking long enough so that MacGraw can utter one of the most execrable lines of dialogue ever written: "Love means never having to say you're sorry." And thus, thousands of baby boomers decided that apologies were for suckers and went on their merry way.

I get that much of what irked me about Love Story is probably what made it so popular forty-two years ago, and in 1970, all of the qualities that I find so repulsive were not really negatives. Love Story is very much a film of and for its time. In its favor is a kind of breezy naturalism, a surprisingly stylish turn that is lent credibility by Richard C. Kratina's on-location photography and Robert C. Jones' agile use of montage. While I know how snarky this sounds, I'm being sincere when I say the best scenes in Love Story are when O'Neal (who I rarely find convincing) and MacGraw (who is badly overdubbed in nearly every scene) aren't talking and instead are just being. When Hiller shows them playing around in the snow, accompanied only by Francis Lai's Oscar-winning (and still effective) musical score, we can actually see them falling in love in a way Segal's insistent scripting never otherwise allows for. It's material that, at last, relies on behavior rather than explanation. Alas, it's also far too littler to ever turn the dismal tide that drowns the rest of the movie.

Video:
For a film that is of its time, Paramount has done an excellent job making sure Love Story in high-definition still looks that way. The 1080p widescreen transfer preserves the muted quality of the film stock, maintaining its chilly, near-documentarian photography in a way that allows the colors to be warm and rich but without overdoing it. Resolution is nicely done, not too sharp but balanced so there is still an appropriate softness to a four-decades-old image. The surface grain nicely adds to the effect.

Sound:
The remixed DTS-HD MA 5.1 soundtrack, I think, does a nice job of adapting the vintage material to modern ears. Back speaker effects are there for enhancement--the occasional ambient noise, a subtle movement of music or a more direct amping-up of the same--but without being overbearing. I think this is wise, maintaining the authentic nature of the original recording.

For those who prefer something even closer to how it might have sounded in 1970, there is also a mono Dolby Digital mix of the English version, as well as French and Portuguese dubs. Subtitles are in all three languages, along with a Spanish option and English Closed Captioning.

Extras:
The extras on the Blu-Ray are the same as on the 2001 DVD release of Love Story, including a particularly excellent audio commentary with Arthur Hiller. He paints a vivid picture of all the circumstances that led to the making of this movie and his intent behind it, including touching on how the film was part of Robert Evans' revitalization of Paramount. (Now that you mention it, The Kid Stays in the Picture is largely responsible for making me want to see this.

Paramount also carries over the fifteen-minute "Love Story: A Classic Remembered" and the original theatrical trailer.

FINAL THOUGHTS:
Skip It. Geez, look, I know this film is considered a classic in some circles, but Love Story is the very definition of "guess you had to be there." The 1970 tearjerker may have worked in 1970, but this tale of doomed romance comes off as strained and dispassionate in 2012. Ryan O'Neal and Ali MacGraw don't generate much heat, and Erich Segal's self-serious script embraces all the egocentrism the baby boomers carried with them as they exited the 1960s. Love Story has a nostalgic cache, to be sure, and despite a strong high-def presentation, it would have been best left as a memory rather than trying to revive it as a going concern.