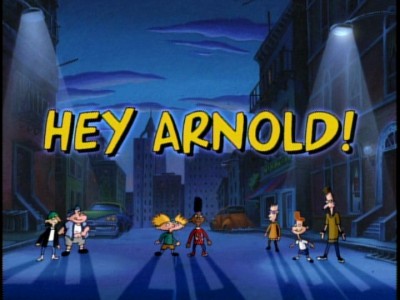 
Hey Arnold! is a unique and entertaining family-friendly television program that aired on the popular Nickelodeon network beginning in 1996. The series was in some ways unlike any of the other programs on the network: the differences began with the title character having a football shaped head and extended to the multi-cultural and racial acceptance the series displayed along with the important backdrop of Arnold living with his grandparents.

Arnold is raised by his grandparents Phil and Gertrude. Arnold is an orphan in the sense that he does not have his paternal parents but there is much love shown and given to him by his grandparents. They make up a family unit that works and it's wonderful to see this display of a child's upbringing on a children's television series. There are many kids these days that end up being raised by grandparents instead of their natural parents for one reason or another. This element of the series brings a positive message that needs to be shared with youth. It could encourage understanding among young peers of the different ways in which fellow classmates or friends are being raised, and for children who are raised outside of the typical social norm it brings greater understanding of their own situation. Family is Family. That is one of the core elements to Hey Arnold! It is a message that helps the series to be all the more valuable to youth.

The series has the benefit of being simplistic without ever being simple. This is the kind of development that takes a huge amount of talent on the part of the entire creative team. The plotlines are always secondary on this series. There are no continuing storylines to really bring viewers back for more. The reason people will enjoy this series so immensely (above everything else) is the characters. There are some reoccurring character-based elements though: Helga is a fist-wielding girl with a massive crush on Arnold (she seems to want to beat him up constantly and bullies him around but then she professes her love for him... to herself). Most of the show is character based and while the storylines are always quite involving and worthwhile they also allow viewers to jump in whenever they want to without production continuity problems.

The show brings young audiences a sense of racial acceptance that isn't always as common in children's shows as one might hope to see. Arnold's best friend Gerald is as close to him as a brother would be and he is African American. There is never anything said on the show to make it seem out of the ordinary at all, which is wonderful, as it isn't out of the ordinary. Tons of kids these days become close friends with people of all races. Yet there is always a need to keep youth educated of how friendships and relationships are based upon character, who a person truly is inside, and not upon appearances: no cultural boundaries need apply at all.

Craig Bartlett did a wonderful thing in creating this show. It's contains lessons for kids to learn and it has solid craftsmanship that makes it entertaining for viewers of all ages (including adults). The characters are distinctive, memorable, and downright wonderful. Viewers grow to like Arnold, Gerald, Helga, and the rest of the characters because they speak to viewers of all ages through the expertise of the genuine writing. Hey Arnold! is thematically rich, entertaining, and emotionally rewarding television that is worth owning and sharing with others. 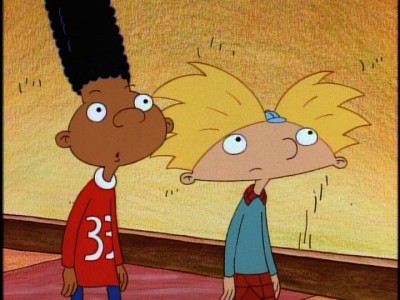 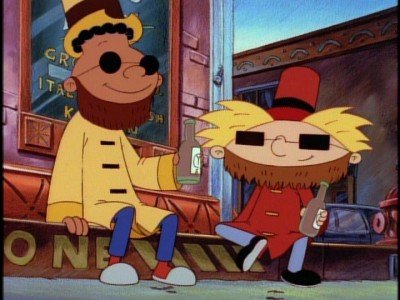 
First of all, Shout Factory has rubbed me the wrong way a bit with some of their recent releases of Nickelodeon NickToons. The decision to go from a format of releasing twenty episodes on a set to ten episodes is somewhat disheartening. Fans would have been thrilled to be able to pick up the complete second season at once, but instead it's going to be spread out. As long as all of the seasons are eventually released though this shouldn't be a deal breaker. It's irritating, yes, but this is Hey Arnold! we are talking about. It's my personal favorite out of the entire NickToons catalog, and I suspect that many other viewers feel the same way about this uniquely charming series.

Things haven't changed much from season one. If you enjoyed the first run of episodes then you're going to continue to enjoy the adventures of Arnold and friends. If you didn't, well, as I said... not much has changed. You either enjoy this series or you don't. The characters help to drive it and they are absolutely every-bit-as-funny, interesting, and memorable as during the initial season of the show. There are still a few entirely new aspects added into this batch of episodes to keep the show just as interesting. The start of the season introduces a new school teacher for the show's many characters, and he ends up taking on a reoccurring role that is pretty prominent throughout the entire set. It's a nice change of pace to see more of the classroom dynamics this season and it helped season two stand out as something willing to make a few additions along the way.

Supporting characters get a chance to shine this go around too. In "Harold's Kitty" and "Eugene's Pet" two of the main supporting characters become better developed and defined through their relationships with pets. If you can overlook the fact that the writers used similar formulas for both of these segments, there are stellar moments in each that really add to the level of understanding viewers will have for these characters. Helga's best friend, Phoebe, also gets a standalone moment as the protagonist in the "Phoebe Cheats" segment. Not all of the supporting characters get their own spotlight moment in Season 2, Part 1 but a good share of them do and it's something that adds significant value to the merits of watching this series on a continued basis. The writers try to give characters the depth you would hope for but rarely see in many children's shows.

One again, Season 2 has delivered one of the series best episodes in the form of a 30 minute long episode. Most of these cartoons are split between two stories/segments per episode, but it's often the 30 minute long ones that I wind up enjoying the most. These particular episodes tend to feel especially well developed, which is perhaps unsurprising given the major runtime gap. Operation: Arnold's Halloween was a hilarious and inventive special episode that had Arnold and Gerald forming a big Halloween prank gone awry. Almost every character on Hey Arnold! has a moment within this one (Helga's father has a particularly memorable role as the alien-obsessed spectator who still tries to convince everyone that aliens exist). The roller coaster ride that the episode takes you on is more entertaining than most big budget Hollywood blockbusters. I'm not even trying to oversell the episode. I really enjoy it that much and expect most fans to consider it a classic moment within the series.

The only downside with this release is the run-time, poor picture quality, average audio, and lack of extras. That's actually a pretty long list, isn't it? It truly is kind of ridiculous when you think of it that way. But Hey Arnold! is an amazing, top-quality series. If you are even remotely a fan of the show (or know someone who is) this is a set well worth picking up despite the downsides.  Just don't expect a release that will rock your world. The show will take care of that request all on its own. These episodes are well worth revisiting. 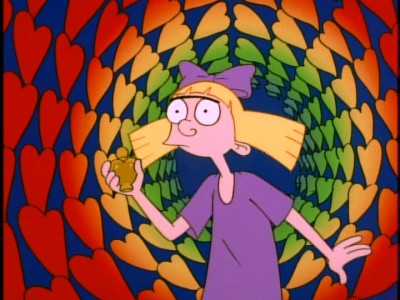 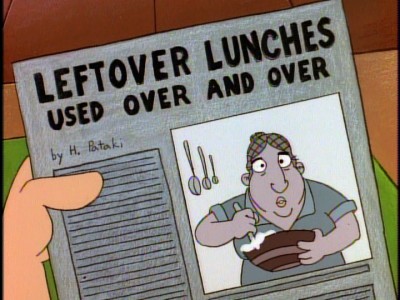 Hey Arnold! Season 2, Part 1 presents ten episodes across two discs in the original broadcast aspect ratio of 1.33:1 (full frame). The picture quality is considerably weaker than fans were probably hoping for but Shout Factory's release should be able to match the Burn on Demand release quality. The series is riddled with compression issues and the contrast is inconsistent too. The colors are acceptable but less vivid than some fans may be expecting to see. It's a disappointing release in the picture quality department but it is also unlikely that a better release will ever come out on DVD. It's the best fans should expect to see at this point. The animation manages to still be impressive regardless because the animators did such a tremendous job with the character designs, style, and unique artistic flourishes. 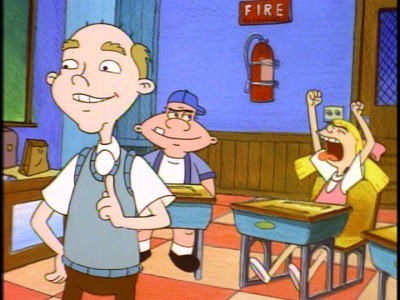 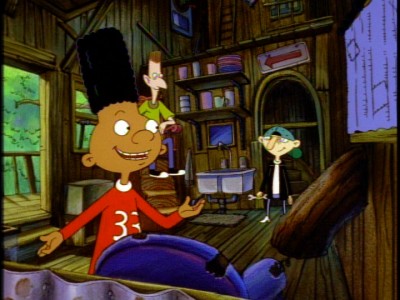 The audio quality for Hey Arnold! Season 2, Part 1 manages to match the picture quality... in that it seems disappointing and inconsistent the entire time. The Dolby 2.0 tracks are certainly listenable and effective in reproducing the dialogue but the audio tracks aren't dynamic at all. The series will never sound that amazing, but it was unfortunate that it ultimately sounded so uniformly average.

There are no extra bonus materials on this Season 2, Part 1 DVD release. I wish there was but there's absolutely nothing extra at all. Zip. Nada. 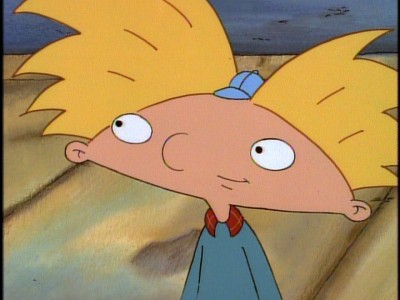 Hey Arnold! is the best Nickelodeon NickToon. It's one of the best cartoons of all time. The characters are charming, the storylines are cute fun, and the lessons learned from the series are valuable on so many levels. Fans of all ages will enjoy revisiting this series on DVD. Shout Factory's decision to release the first season in entirety and then to switch to what essentially amounts to volume releases (even if ten episodes is still quite a lot) is disappointing. I don't know what inspired the decision but it feels an awful lot like a cheap ploy to gain a couple extra dollars from fans. I wouldn't have minded a higher price for a complete season, but perhaps the company feels most people feel differently. The set comes warmly recommended for the episodes but the shorter episode count is going to be a detractor for some fans, it might even mess with a few people's OCD on the shelf, but I still encourage a purchase of this delightful show. Recommended.