Anime seems to be the one genre that can fairly regularly get away with sticking to a series of genre staples. In "Broken Blade" a set of six, 50--minute OVAs adapted from the manga of the same name, the staple is giant mechs, known in the series as "Golems." The interesting spin "Broken Blade" puts on things, is along with Golems, many fantastic pieces of technology are powered by Quartz, which can be manipulated by magic. However, the test of any good saga is the strength of its characters and "Broken Blade" starts off on shaky ground by introducing the hero, Rygart, an "un-sorcerer" (the series' words, not mine) who is unable to do magic and thusly, unable to control Quartz. Despite his status, Rygart is still trained in military strategy and alongside his friends, is able to control a unique Golem that no other person has been able to control, and from there, all hell breaks loose on both sides of the screen. 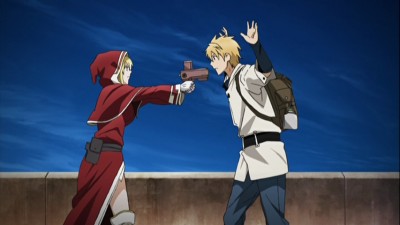 "Broken Blade" isn't a bad series by any definition, but it has a long ways to go before it truly establishes itself from the other genre entries before it. The main problem with the series, is the limited amount of time available to tell the story. On paper, six, 50-minute OVAs would seem ample enough, but in reality, each installment contains a combined total of 10-minutes of opening and closing credits that add nothing to the narrative; at the end of the day that adds up. The first third of the series, is largely back-story, with the very first installment suffering from sensory overload: there's an introduction to the world of the series, Rygart is obviously introduced, we meet Rygart's secret love Sigyn who is married to Rygart's friend Hodr, who also happens to be the king of the land; that wasn't enough there's a war going on and with that comes a heavy dose of political talk with the action sparsely peppered here and there. 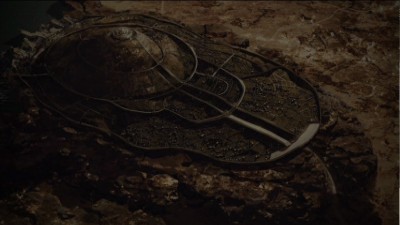 No one will ever accuse of "Broken Blade" of being un-ambitious. Once viewers make it past that initial third of intense set-up, the series delivers drama and action in balanced quantities. The war between Rygart's homeland of Krisna and the series' antagonists, the Athenians make for some gripping action set pieces. Characters on both sides die as others are forced to step up to the plate whether they want to or not and internal struggles within groups of factions and friends alike keep things in constant motion. Tying it altogether is a quality of animation that is cinematic quality; character movements are fluid and natural, colors are finely balanced between stark realism and eye-catching vibrancy, and production design as a whole is one-step removed from utterly beautiful. Going back to my initial comment that anime gets away with "rehashing" the same basic set-up a lot, the very nature of animation itself is the reason the genre can do this, and "Broken Blade" makes sure the look (and sound) of the series is top-notch at all times, even if the story itself is a hair above adequate at times. 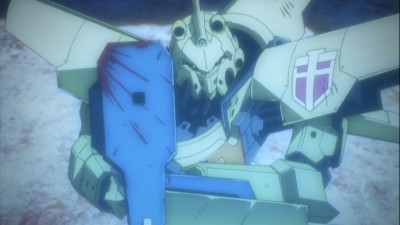 "Broken Blade" is best digested almost entirely as one package; if you do the math, it's about four-hours of beautifully produced, mech action strung together by compelling characters. Devoted genre fans will find more to love out of the series as opposed to a very casual watcher like myself, but at the very minimum, "Broken Blade" will never bore you. On a final note it's worth mentioning, the series features a strong English dub that is far more natural sounding than many others I've heard and whether you choose to go with the original Japanese voice cast or the dub, your experience will not be lessened in any way.


The 1.78:1 anamorphic widescreen transfer is absolutely stunning with intense color reproduction that is absent of any noticeable compression artifacts. The animation comes off as very smooth and fluid, with only a mild bit of edge-enhancement gracing a great transfer.


The Dolby Digital Japanese 5.1 audio track is well balanced, utilizing surrounds most effectively in action-sequences. The low-end feels like it could used more of a workout and one wonders what a solid DTS track would have added to the experience. The Dolby Digital English 5.1 audio track features dialogue mixed just as professionally as the original language track. English subtitles are included.


The extras sadly consist of only a clean opening and closing animation, but nothing of value to those interested in the production.

"Broken Blade: The Complete Collection" features a strong A/V production that does the incredibly production design of the series the justice it deserves. As stated previously, true genre aficionados will love what the series has to offer, but for all else, it's a very familiar premise done well; if one doesn't expect the proverbial wheel to be reinvented, than "Broken Blade" is worth a little bit of your time. Recommended.