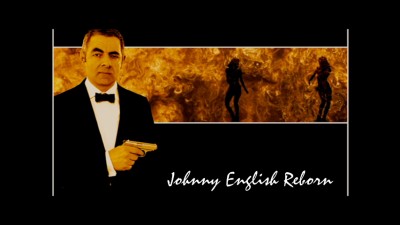 Johnny English (Rowan Atkinson) is the funny-guy who is back in action (kind-of) with yet another one of these preposterous and silly-natured (sort-of) comedies. In Johnny English Reborn the famed spy must return to his MI-7 roots in order to deflate the dastardly plans that have been crafted by international assassins attempting to take out a world leader in order to spin the world into some sort of circus frenzy.  Not literally... but they do want to cause a lot of animalistic chaos for everyone involved. (Note to Self: How is that Punny?)

This sequel film to the successful Johnny English (2003) begins by revealing that the Johnny English master spy had retired from his spy background. In these opening moments there is little doubt he will return. We are quickly taken to a scene in Tibet and are shown the retiree English going through intense training that involves moving giant rocks, taking intense kicks to bodily-function parts, and other odd things. It sets the stage for English's return to his ol' suave roots and he undergoes his new mission of stopping the assassination squad bent on eliminating a political leader. He undergoes his return to the field with the help of someone new, Agent Tucker (Daniel Kaluuya), who admires English and wants to be able to follow in his footsteps. The beautiful and charming Kate Sumner (Rosamund Pike) also helps out by keeping him in check along the wobbly action-packed way.

The storyline didn't exactly create a lot of surprising or thoroughly engaging elements. The basic premise was something that has been crafted more-or-less repeatedly in spy spoofs and that certainly doesn't help to sell tickets to audiences. Bad guys? Check. Good guys? Double check. Attempt to mess up a governmental system and a need for the super spy extraordinaire to stop the bad guys? Yep. It's all here and it is wrapped up nice and tidy with those neat little ribbon-bows you might find on gift-wrapped presents. It's a good enough setup for an interesting experience but its not exceptional or spellbinding plot material at any moment and with these scenarios the quality really depends upon the quality of writing and the overall execution of said material. 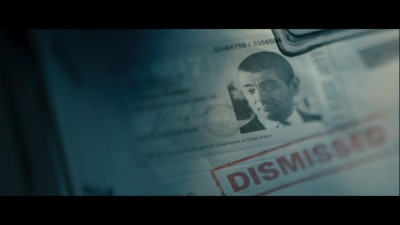 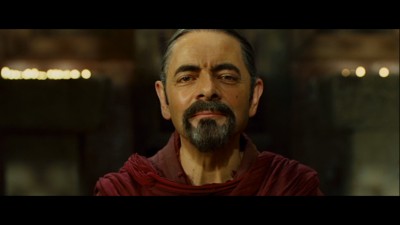 The main reason anyone will want to decide to check out these comedic outings with Rowan Atkinson isn't particularly complex either - it's because he's a humorous comedic actor with good physical-comedy chops that have been well honed over all these years of performing. He understands how to make us laugh with a silly expression or routine. It's not surprising that Atkinson continues to have a loyal fan-base. His Mr. Bean character was perhaps the most bizarre character in the history of British television (we might as well let the debate commence) and his slightly less-odd but still confounding Johnny English is a well-likable, unbelievable, and ultimately charming goofball who keeps finding himself in increasingly strange scenarios.

Director Oliver Parker (An Ideal Husband, The Importance of Being Earnest) seems to be a decent fit for this kind of material, as surprising as that may be given some of his previous films. He doesn't have a particularly graceful directing eye - many sequences look chaotic, disheveled, and disorganized but the emphasis on comedy is well-enough balanced that it overshadows the negatives. The music by Ilan Eshkeri is standard action-mode fare but it works as appropriate background material. The editing is less praise-worthy. Even with a huge chunk of the film left on the cutting room floor Editor Guy Bensley leaves in a lot of material that feels incomplete and worthy of additional trimming.

Johnny English Reborn is a mixed bag. A lot of the jokes are fairly childish and immature. It's a film that is never capable of making jokes that don't feel as though they were done before. The humor will manage to appeal to fans of the first Johnny English, though it is difficult to say whether or not the film has any legs to bring in new audience members. Though something should be said about the fact the film feels perfect for 10 year olds... 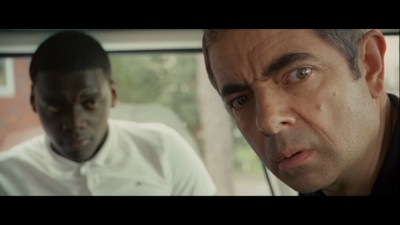 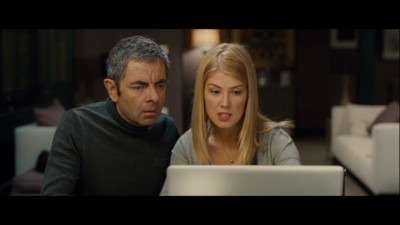 Johnny English Reborn arrives on Blu-ray with a visually impressive 1080p High Definition presentation which preserves the 2.35:1 theatrical aspect ratio. The cinematography by Danny Cohen has a reasonably pleasant feel to it and with clean and crisp imagery that manages to enhance the gizmo-gadgetry aspects that are so appealing in spy films. It doesn't have flawless picture quality as there is some slight softness is certain scenes. Serious Rowan Atkinson fans will have a blast anyway and be delighted by the strong presentation.

Please Note: The images featured in this review are from the DVD edition in this Blu-ray/DVD/Digital Copy combo release.

The audio is presented with 5.1 DTS-HD Master Audio for the English language track. The presentation calls for some decidedly sonic surround usage and sound effects that reflect the action on-screen. The positive is that the sound quality is excellent with dialogue that was well reproduced and easy to understand. The downside is that while there are some solid effects used I was a little underwhelmed with the track when comparing it to other action films utilizing DTS-HD-MA on the Blu-ray format.  It is a good enough mix, but it doesn't exactly stand out as a showstopper. Fans will likely feel the crisp and clean mix works well considering the style of film (there is a larger emphasis on comedy than on action anyway) but it doesn't exactly make one feel entirely enthused.

Wowza! There are tons of bonus materials on this release. Certainly a lot more than I was anticipating given the quality of the film itself and its somewhat average box-office run. I expect anyone who enjoyed the film will be pleased by the amount and quality of extras.

The central and most notable supplemental inclusions:

The English Files: The Making of Johnny English Reborn (25:04)

A number of shorter featurettes are also included: 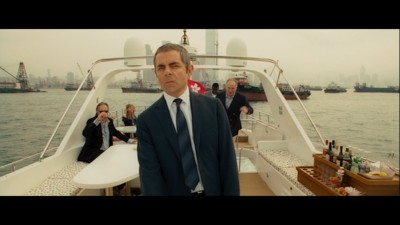 To parents: I'd strongly suggest Johnny English Reborn be used as rental fare to share with the young ones and to look at the possibility of enjoying a few laughs along the way as the added bonus of viewing it with them. It's a cute and technically harmless production but it doesn't aim for greatness (but at the same time it never reaches total boredom or snooze-fest territory). This spy-spoof outing presents simple comedic fun to pass the hours away and nothing more. To non-parents: Any Rowan Atkinson fans out there? Yes! You'll enjoy Johnny English Reborn well enough as rental material. Give it a chance and you'll have a couple hours' worth of fun.