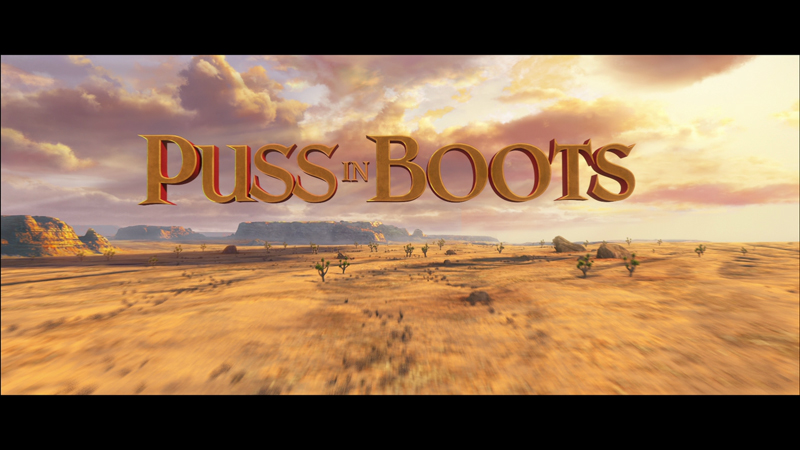 
The Movie
Though your humble reviewer has watched all four Shrek films, and enjoyed them to various degrees, outside of the first one, none would demand repeat viewings. However, those three sequels brought us the one character that escaped the franchise with a positive reputation: Puss in Boots, the feline Antonio Banderas avatar. So it made perfect sense for Dreamworks to take his boots and walk them over to a film of his own.

But instead of making him just an extension of the goofy, pop culture-drenched land of Far Far Away, Dreamworks director Chris Miller and company took a good look at what made the character a popular addition to the franchise and played to his strengths, crafting a a swashbuckling action movie with touches of comedy. The resulting film, like the best Pixar has delivered, is lots of fun for everyone in the room, perhaps even moreso for the adults, and has resulted in an Oscar nomination. At the very least, it's certainly not boring for any audience, as this prequel tells the character's origin efficiently and sets up and delivers nearly non-stop action with plenty of heart early on to ground things well.

As Puss, Banderas is silky smooth, blending the best of his most popular characters, Zorro and El Mariachi, while his character's furry looks provide the cartoon cuteness and cat-based sight gags that keep kids smiling. However, there needed to be someone who would keep Puss' large ego in check, otherwise he could quickly become overbearing. Master thief Kitty Softpaws is just the right woman for the job, and with Salma Hayek providing her voice, chemistry between the two was guaranteed, as evidenced by their first tango-fueled interactions, which stack up well with the best love/hate duos in film. With these two in the leads, the movie was playing with house money from the start. 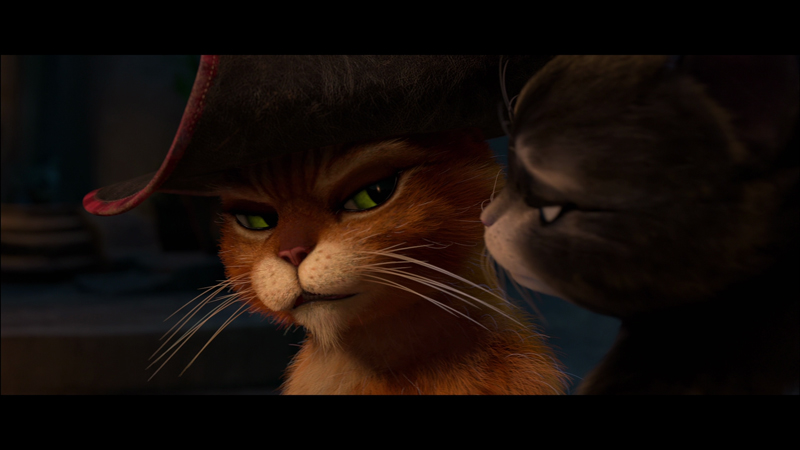 Unfortunately, the third star, the hilarious Zach Galifianakis as Humpty Dumpty, a untrustworthy figure from Puss' past, goes mostly to waste (while Amy Sedaris and Billy Bob Thornton, as the disturbing Jack and Jill, do fine in limited on-screen time.) Certainly he does a nice job of keeping the character from being simply a bad guy (despite getting no help from the character design, which consistently makes him look evil, or at best creepy.) But why get Galifianakis if you don't give him anything funny to do (besides, of course, giving a quality actor a chance to spread his wings a bit?) To be honest, I didn't even recognize him at first, thinking it was Patton Oswalt expanding his animation resume and delivering yet another fine non-comedy performance. Admittedly, laughs are not bountiful in this film, with excitement being the hoped for result for most of the film, but with a character who's a silly-looking egg, perhaps they could have done more with Galifianakis. Instead he's playing second comedy fiddle to the ridiculous "Ohh cat," who should be in every Dreamworks movie (and every animated movie for that matter) from here on out.

Part of the change in tone from the Shrek franchise to this movie is the fact that it has a truly cinematic look that just isn't present in the previous films. If you re-shot this movie with real actors, it would fare no worse, thanks to Miller's eye for style and technique (while many animated movies would look like sitcoms outside of CGI.) The use of split-screens alone makes it look unlike pretty much any other animated studio film, but the action sequences, including a stagecoach chase, a fast-paced climb into the clouds and a pseudo-Godzilla attack, make for a unique animation experience (unfortunately the compositions intended to enhance the 3D experience are overly obvious and feel forced in most cases.) Again, the key is aiming for a thrill instead of a laugh, and in this, the film succeeds pretty much every time. 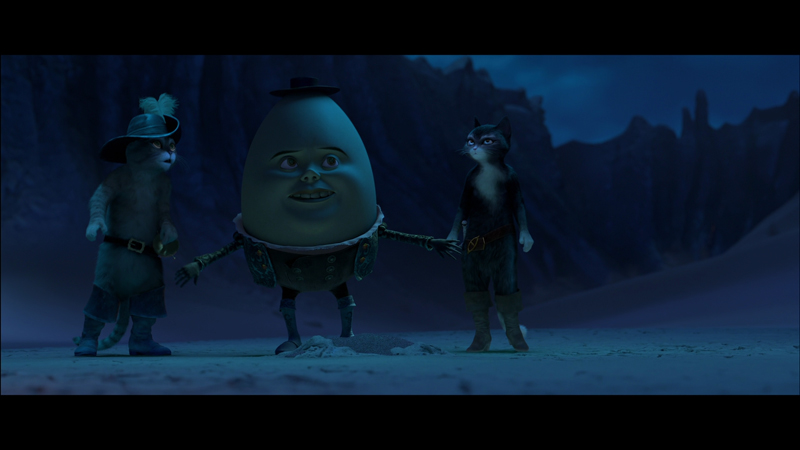 The Disc
This film arrives in a two-disc set, with a Blu-Ray disc and a DVD, in a standard dual-hubbed BD keepcase with a slipcover that repeats the cover art. The disc features an animated main menu with options to watch the film, select scenes, adjust the languages and check out the extras. Audio options include English 7.1 Dolby TrueHD and audio description tracks, along with French and Spanish Dolby Digital 5.1 tracks, while subtitles are available in English, English SDH, French and Spanish.

The Quality
The 1080p AVC-encoded transfer is simply gorgeous, showing off the top-end of Blu-Ray's capabilities, with an across-the-board sharp image that boasts rich vivid color and deep, dark black levels. It's as if the film was made with an eye toward showing off the level of fine detail, with tons of examples like cat fur, feathers and detailed textures through-out the film that will catch your eye every time. There's an undeniable cinematic flair to the film, with epic vistas and beautifully-composed sequences that's only enhanced by the quality of the presentation, which is virtually free of any kind of digital distractions, despite a wide range of looks and some extremely fast action. It's the rare movie that makes you want to focus on the backgrounds as much as the characters, but that's just what this movie inspires.

A Dolby TrueHD 7.1 soundtrack brings the noise on this disc, offering up an outstanding aural experience that fits perfectly with the feel of the film. There are little atmospheric touches all over the place, that merge with the foreground sound and impressive score to put you in the middle of the action, via effective positioning in the surrounds and some fun dynamic mixing. It's a sign of a good audio presentation if you turn your head in reaction, and that happened several times here. The only drawback, if there is any, is the overall strength of the sound, including the bass, as it felt like I was turning my receiver up a bit higher than usual.

The Extras
The big extra that's exclusive to the Blu-Ray release (and the two-disc DVD set) is a 13-minute short, Puss in Boots: The Three Diablos. Following up on the film, Puss tackles a new challenge as a freelancer, putting him up against a trio of hellion kittens who give him a run for his money. Though they never speak a word, the Diablos steal the show, with a mixture of cuteness and mischievousness, and a surprising amount of personality (particularly the one gray one.) Though this short is light on story, with the eventual climax coming off rather weak, it wouldn't be surprising to see this entertaining threesome again in a Penguins of Madagascar-type series.

There are a few Blu-Ray exclusive included, starting with "A Dreamworks Fairy Tale." After selecting from a menu of select words, you'll hear one of three nursery rhymes done Mad Libs style. This one's definitely aimed at younger viewers. Next there's "Puss' Paw Pouncing Challenge," a five-level set-top game where you use a reticle to capture spots of light before the time runs out. It's rather easy at first, but gets progressively harder and, unlike many set-top games, is actually fun to play.

"The Animator's Corner" is a video commentary with Miller and an assortment of members of the cast and crew, but it's actually more like a documentary that's presented picture-in-picture with the film, featuring interviews, looks behind the scenes, animation tests, animatics and concept art. Though there's tons of info offered to animation fans, the kind of background most animated films leave out of their DVDs, it would be nice to be able to switch back and forth, viewing the documentary in more detail. The pace could be a bit more spirited as well, as things drag a bit when animatics are being shown.

The exclusives conclude with a trivia track that offers fun minutia related to the film, including a "meow meter" that tracks whenever Puss or Kitty meows (though it liberally includes hisses in the count.) It's not as rapid-fire as some other trivia tracks, but it's also not as padded, sticking pretty close to the film, rather than just adding random disconnected facts about cats and nursery rhymes.

The extras shared by all releases start with "Purr-fect Pairing: The Voices Behind the Legend" (9:21) a featurette focusing on the actors who give life to the characters. Hearing from Hayek, Galifianaki and Thornton is nice, but it's just fun to watch Banderas deliver his super-serious lines while wielding Puss' sword. Three deleted scenes (in animatic form) follow, with introductions by producer Latifa Ouaou. The first two scenes didn't add a lot to the proceedings, but the extended third scene changes up the ending quite a bit (though not really in any real positive way.)

"Kitten to Cat" (12:01) presents a rather detailed profile of the main character, from his appearances in the Shrek films to his origin and development in this film, with insight from the creative staff and Banderas, as they discuss his impact on the Shrek franchise and what it took to make him the leading man. The next featurette is the start of the fluff though, as "Glitter Box Dance-Off" looks at the choreography used to create the dance battle between Puss and Kitty, as three dancers show off the moves step by step for you to replicate. My daughter jumped right in, and greatly enjoyed it, so there's your target audience.

The four-minute "Klepto Kitty" continues the kid-friendly theme, mixing short clips of the film with a profile of a real-life cat burglar who steals things from neighborhood homes. The silliness carries on with "Kitty Keyboard," four nursery rhymes played by a relative of the Internet-famous Keyboard Cat, with meows standing in for notes. "Fairytale Pop-Up Book" offers up highlights for four characters in the film (video, audio, photos and text) in a neatly-designed pop-up theme. It's nothing you haven't seen in the film though, so the value is questionable. Kids will find more enjoyment in "Kitty Strikes Again," a five-level spot-the-difference game.

It seemed like "The World of Dreamworks Animation" was going to be a genuine extra, but it's really just commercials for other Dreamworks films. There's also five promos, including a commercial for the How to Train Your Dragon Arena Spectacular, a live-action stage show touring the U.S. in the summer of 2012.

Also included with this set is a DVD version of the film, as well as a code for a digital copy, which may expire February 24, 2013. 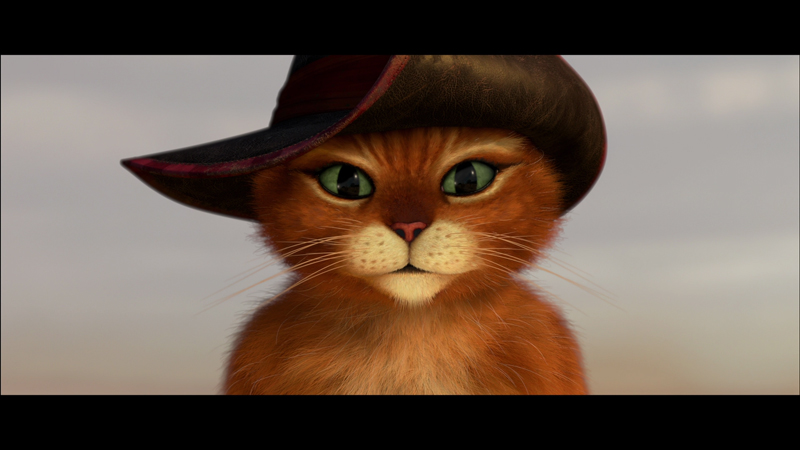 The Bottom Line
As a fan of the Shrek films, but one who understands why it's not critically acclaimed, I had my expectations coming into Puss in Boots, and they were not met. That's not a bad thing though, as it's quite different from the parent franchise, delivering a fun adventure romp, that's mostly free of pop-culture references and emphasizes adventure over comedy, while not taking itself too seriously. The Blu-Ray package offers an outstanding level of quality, along with an impressive selection of extras that will appeal to both kids and film fans, making it easy to recommend adding Puss in Boots to just about anyone's collection.