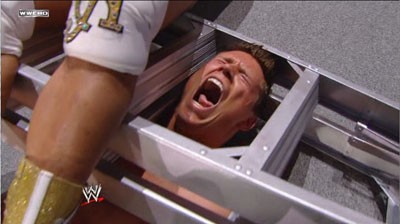 WWE TLC 2011 was supposed to be a stinker. TLC--meaning Tables, Ladders, and Chairs--is an annual, second-tier pay-per-view event that was established in 2009. It's usually a mere gap-bridger between Survivor Series and Royal Rumble. By showtime this year, much of the card was still a mystery to live viewers. Not even WWE's top superstar, John Cena, bothered to make an appearance at such a laughably small event. Expectations for TLC 2011 were abysmal. The wrestlers, however, accepted the challenge and put together a pay-per-view that had no business being this fun to watch.

The full card is listed below: 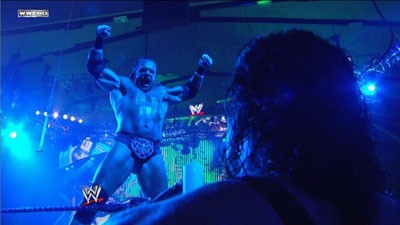 By definition, TLC 2011 is packed with violent gimmick matches although one match, featuring a sledgehammer, nearly derails the show. The premise is solid: an ominous sledgehammer dangles above the ring, just out of reach. The first wrestler to set a ladder, climb up, and untie the sledgehammer is free to pound his opponent into a lifeless flesh-bag of bone mash. Sounds awesome, right? Unfortunately the WWE booked the two most boring main eventers in history, Triple H and Kevin Nash, to stall and stagger their way to another paycheck. This match, combined with the Diva match, nearly wrecks the momentum of a hot event. Thankfully, the other matches on the card pull the dead weight out of the grave to make TLC 2011 a surprising success. 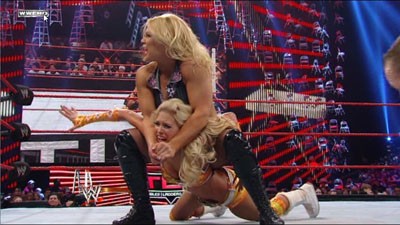 The Match of the Night is the Triple Threat-TLC main event for the WWE Title. In this match CM Punk, Alberto Del Rio, and The Miz face the immense challenge of filling the super-massive black hole left by John Cena's conspicuous absence. I never grasped the logic behind Triple Threat matches. Why would a champion put his title on the line in a match where he can lose without being pinned. This main event is also a TLC match which eliminates the logic gap, but still lessens the champion's odds of winning. My peeve with Triple Threat matches aside, the action-packed title bout features several unique twists including a spot where Miz handcuffs CM Punk to a turnbuckle. The Miz, of course, blows his golden opportunity by simply being The Miz. Every wrestler in this match puts on a brilliant performance and proves that they more than capable of carrying a main event without John Cena. 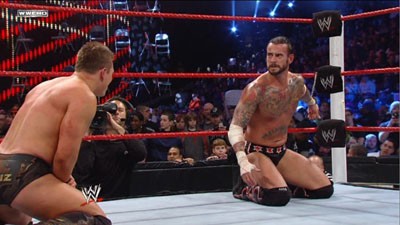 Coming in at a close second for match of the night is the WWE Tag Team Championship match, Air Boom vs. Primo and Epico. Without any gimmicky props to serve as a crutch, the two teams put on a show that evokes nostalgic memories of classic, 80's style, tag team matches. Other highlight matches include Dolph Ziggler vs. Zack Ryder for the U.S. Championship and Big Show vs. Mark Henry for the storied World Heavyweight Title.

Sound: The DVD contains an English Dolby Digital 5.1 track and a Spanish track. The English track is solid, but the mix does not serve the audience justice. The crowd should act as another character throughout the show, adding an almost tangible buzz to the in-ring action. At times the crowd noise is barely audible and makes the event feel dead. Maybe the crowd was just sitting on their hands for much of the night. However, on numerous occasions the crowd pops and the accompanying noise doesn't seem to match.

Video: The video is presented in 1.78:1 anamorphic widescreen. Instances of minor artifacting are abundant throughout the DVD, especially in the crowd. But it never distracts from the wrestling action. Overall, the video quality is on par with other wrestling pay-per-view DVD's.

Extra: I say "extra" because even the menu option is the singular label, "Special Feature." Included is a solitary, two-minute interview with Daniel Bryan. If you do not already know the TLC 2011 results, then do not watch this interview until after the main feature. It completely spoils the best part of the entire event.

Bottom Line: TLC 2011 exceeds all expectations and is a reminder of why we love professional wrestling. Even knowing the results beforehand does not diminish entertainment value of watching this card unfold. A couple of lumbering middle matches hurt, but do not destroy TLC's momentum. Most of the matches are an incredible display of expert professionals performing in the prime of their careers. Chock-full of title-swaps, clean wins, swerves, and awesome in-ring action, this event is mandatory viewing for any WWE fan--hardcore or casual. Recommended.