Although my personal enjoyment of the original "Twilight" movie remains to this day, the sequels that followed strayed into dreadful and irresponsible territory, especially given it's target audience of teenage girls. Make no mistake, "Twilight: Breaking Dawn Part 1" is wholly terrible film in every sense of the word. Looking past the evidence that splitting a book with a paper-thin plot into two movies is bad enough, it's almost astonishing at how the actors involved have undergone a devolution in regards to their acting abilities. Yet, a sick part of me couldn't look away and that even sicker part of me, the one that revels in a train wreck came out, making "Breaking Dawn Part 1" without a doubt one of 2011's funniest films...for all the wrong reasons. 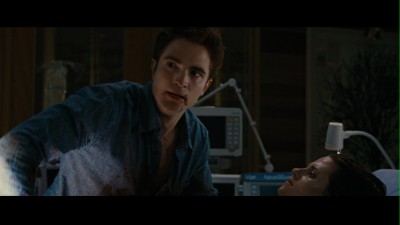 After three movies of "will they or won't they" tension between Mary Sue...er... I mean Bella (Kristin Stewart) and Edward (Robert Pattinson), "Breaking Dawn Part 1" begins with the event announced in "Eclipse's" final moments: Bella and Edward's wedding. This time around, the series has yet another new director, Bill Condon, whose track record is interesting to say the least; let's just say those expecting the quality of "Gods and Monsters" are better left expecting something less technically sound than "Candyman: Farewell to the Flesh." Condon puts on an admirable showing behind the camera, aided by master cinematographer Guillermo Navarro, but at the end of the day, like the books themselves, the story driving this blockbuster series has little to offer aside from a healthy dose of generic developments and apathetic plot developments. 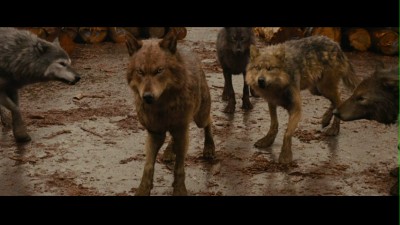 It takes a solid 35 minutes or more for the film to enter a bizarre form of self-parody, choosing to fill those minutes with the wedding sequence, where little to nothing happens aside from Bella's dad making veiled tipsy threats to Edward and Jacob (Taylor Lautner) arriving out of the woods to wish his friends well before having a meltdown when he finds out Edward is going to have sex with Bella; I honestly have no witty retort to this, it's sad and awkward, which is Jacob in a nutshell. The eyebrow raising begins once the newlyweds head to Brazil (remember when the vampires sparkled in the sun in this series?) and we see Jacob's hissy fit had some strange merit, as Edward destroys a room after the marriage is consummated and Bella wakes up the next day with bruises, causing me to erupt with stifled nervous laughter. If there's a single scene that encapsulates everything that's wrong with this installment if not the series, it's this weird pseudo-domestic violence infused undertone, complete with Edward apologizing for hurting his wife. 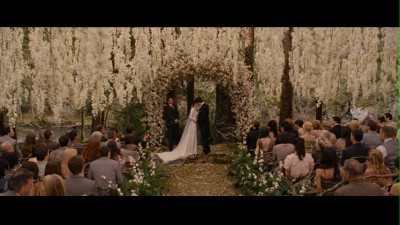 If that weren't bad enough, the final hour of this "slower than molasses in January in a New England winter" saga is the bumbling attempt at an abortion debate once Bella finds out she's pregnant with a half-vampire/half-human baby. The crux of this debate is whether it's a fetus or a baby; please, you can't make this stuff up. The one real saving grace is an out of nowhere werewolf council with Jacob in CGI wolf form meeting up with a bunch of other CGI wolves to talk about Bella and Edward. The budget must have run out before the animators got to work on the mouths of the wolves, either that or they speak telepathically. There's little more to say about "Breaking Dawn Part 1," a shallow useless excuse for a movie that it's teenage female demographic will eat up. The acting is abysmal, with Stewart being most convincing as a silent skin and bones near corpse at the end of the film. Pattinson is the strongest actor in the film (no, I take that back, Michael Sheen's brief cameo is the best piece of acting), while Lautner looks uncomfortable doing anything other than taking his shirt off while running, which is ironically the film's opening scene. It's a perfect storm of ineptitude and awkward creepiness masquerading as touching (I won't touch Jacob's weird psychic pedophile scene at the end, it has to be seen to be believed). Thanks to Condon's direction though, the movie looks far better than it is and if one choose to approach it as a self-aware parody of itself, it will not disappoint. Let's only hope "Breaking Dawn Part 2" amps up the wretchedness ten-fold.


The 2.40:1 anamorphic widescreen transfer is a little soft in terms of fine detail, but otherwise sports a striking solid image. Navarro's color choices are intense and natural, even down to better than anticipated contrast levels in some darkly lit third-act scenes. A hint of edge-enhancement is the only nit left to pick.


The Dolby Digital English 5.1 audio track doesn't often unleash the surrounds, but when they do it's more impressive than one would think from a genre picture. Dialogue is clear and clean, allowing Pattinson's sometimes-mumbly delivery to still be heard without effort. A Spanish Dolby Digital 5.1 DVS track is included as well as English SDH and Spanish subtitles.


The first disc in the set houses a feature-length, rather interesting technically themed commentary from director Condon. On the second disc, a lengthy (90-odd minute) documentary covers the entire film making process, while "Jacob's Destiny" is a brief look at Lautner and his character's role in the final film. The "Wedding Video" is just that, a handheld summary of Edward and Bella's wedding. The most baffling extra is "Edward Fast Forward" and "Jacob Fast Forward" a feature where fans can watch every scene featuring either Edward or Jacob, which is essentially the entire film split in two segments sans the few minutes neither is on-screen.

"Breaking Dawn Part 1" is a terrible movie, but incredibly entertaining to watch nonetheless. Few movies result in such an awkward stilted final product that sports such high replay value, especially with a group of friends to mock it. Still I'm disappointed that the series hasn't really grown from its promising start. In short, fans should be incredibly pleased with this release, which doesn't disappoint on a technical level. Recommended.