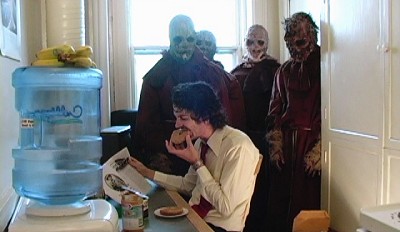 Thanks to geek culture, references to the things you love has become the most boring element of film. Like a snake eating its own tail, every bit of popular culture that catches the eye of the public at large is consumed and regurgitated to the exact same people. Filmmakers who want nothing more than to recreate the experience of seeing something new and wildly inventive end up robbing future audiences of that very experience by trying to emulate it, without any of the invention or flair that went into the original creation. And B-horror fans have it the worst: not only is horror already a genre that lends itself to amateur filmmaking, given how cheap it is to mix up a batch of fake blood and shoot something in the woods, but now even the potential that someone might devise something crazy has turned into an endless string of cabin-in-the-woods films that try to get by on bad jokes and Bruce Campbell impressions.

It is with some trepidation that I approached astron-6. A two-disc set worth of short films directed, written, produced, and starring a bunch of unknowns, with a heavy lean towards those same kind of genre films is a hell of a risk; there's nothing worse than suffering through hours of crap someone shot in their backyard with the belief that a clumsy nod to Re-Animator will win the hearts of audiences. Thankfully, wonderfully, almost inspiringly, the five members of the troupe -- Adam Brooks, Jeremy Gillespie, Matt Kennedy, Conor Sweeney, and Steven Kostanski -- aren't just imitators. Although their shorts certainly reflect any number of inspirations from the same pool as everyone else (just look at all the movie posters visible in their shorts), they bring their own demented sensibilities to their creations, easily elevating them above most of their competition.

The worst part about most homages is that the filmmakers in question seem to think the film they're referencing is a jumping-off point. Whether they're just oblivious or lazy, I don't know, but even if you're an aspiring filmmaker looking to tip your hat to someone else, don't make the mistake of letting your source do your work for you. It's not enough to, say, envision a Friday the 13th spoof and allow that to provide the setting and story, and the astron-6 crew understand that. H.I.Z. takes place in a summer camp where kids are getting killed, but that idea's been fused with one involving flesh-eating zombies, and the whole thing's been comically dubbed as if the film is some sort of Italian import. What's more, none of the homages really account for the characters: a sleazy camp counselor who hits on the girls using his terrible artwork, or the heartbroken wimp who ends up taking a sword to some of the zombies.

Most of astron-6's genre pieces play a similar game: set up one thing, then do another. Inferno of the Dead is a hilarious short about a supposed zombie apocalypse that turns out to be more benign than expected. Cool Guys kicks off like a riff on any number of crappy '80s beach movies about teenagers trying to get laid, then takes a turn, then takes another turn, then takes yet another turn (in the middle of the epilogue). 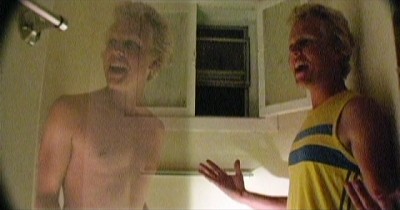 Goreblade promises Conan the Barbarian-style sword-and-sorcery action, but never quite gets there. Ena Lake Blues is another slasher film spoof, shot like a silent movie. The finishing touch is the authenticity of the gang's technique, which rarely feels (unintentionally) sloppy. These guys don't just know one or two movies, they're familiar with the styles as a whole, which sells their recreations.

Many of the shorts focus more on story than any specific reference. Although Punch Out has a distinctly '80s tone, it's also just a really weird little story about a guy who decides he really enjoys getting punched in the face. Insanophenia follows two employees at some unexplained factory filled with bloodthirsty creatures. Kris Miss is a ridiculously goofy infomercial for a fake Yuletide wife that feels like something clipped from "Tim and Eric." Nobodies even makes a decent grab at legitimate emotional investment in two filmmaking friends who end up split apart when one moves away. Not all of their films are successful -- I can't say I have any idea what the hell Heart of Karl is about -- but there's always a sense that someone is invested in the project.

If I'm not mistaken, astron-6 previously self-published their own DVD (titled "Year One"), but now they've teamed up with Troma, who is not only putting out this upgraded collection of their shorts, but also their feature-length films Father's Day and Manborg (EDIT: Dark Sky would end up releasing Manborg). Few match-ups have felt so right. Just like the best Troma films, the gleefully deranged, excessively bloody, and refreshingly wide-ranging films of astron-6 splatter onto the screen with an infectious enthusiasm that makes even their lesser material shine.

The DVD
Comic-book style artwork is nothing new, but in the case of astron-6, it feels right. The image, which combines elements from a handful of random shorts and mashes them all together, is a pretty perfect indication of the content contained within. Inside the case, the discs sit opposite each other, and there is no insert. If I'm not totally crazy, though, I think the box lists a short that is not actually on the DVD called Street Racer (available on the group's YouTube channel). 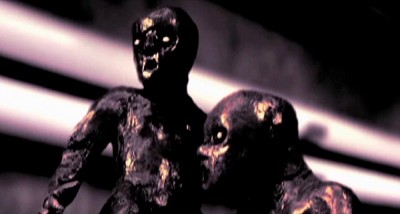 The Video and Audio
With one or two exceptions, all of the shorts are presented in 1.85:1 non-anamorphic widescreen. These appear to have been shot on consumer-grade equipment, and they look and sound like it. Video sports heavy aliasing, artifacts, burnt-out contrast, and more. Colors are often intentionally altered for a "vintage" look, as well as artificially degrading the film with scratches and lines. English 2.0 audio is also unbalanced in terms of volume, with the music and sound effects frequently favored over the dialogue, but I never had significant trouble understanding the dialogue, which is probably all that matters.

The Extras
Disc 1
"Introduction by Lloyd Kaufman" (1:43): A goofy little clip from Uncle Lloyd automatically plays before the main menu.

Audio commentaries on Cool Guys, H.I.Z., No Matter What...You're Dead!, Kris Miss, and Heart of Karl by the members of astron-6: A selection of choice quotes from these tracks: "Some hobo shot some of this, that's why it looks like shit." "Not even really jokes, just hate." "The dangly bit on the end is the best part." "I want nothing to do with this piece of garbage." "This is the worst kind of commentary." (The best of the tracks: the one on Cool Guys.)

Cool Guys Trailer (3:33): A bizarre trailer for the final film with some alternate footage and a significantly altered take on many of the things that happen in the movie.

Behind the Scenes Photo Galleries for Cool Guys, H.I.Z., Punch Out, No Matter What...You're Dead!, Sebastian & Alan, and Heart of Karl are also included. 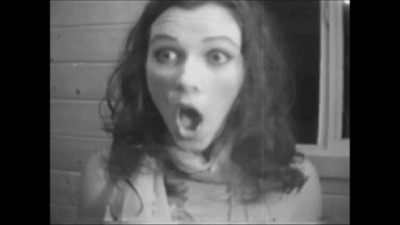 Lazer Ghosts 2: Return to Laser Cove Extras: An audio commentary and a behind-the-scenes video (9:13) will fill the viewer in on the director's grumpiness, the way astron-6 treats their actresses, and reveals what amounts to a reel of extended takes.

Additional audio commentaries on Inferno of the Dead, Nobodies, Extreme Ghost Killers, and Fat Adam: Some sense of monotony has set in, and the commentaries on the second disc start to drift away from the films themselves and more towards the repeated use of copyrighted movie and song titles, and ribbing of the other group members. Still worth a listen.

Promo Material for Manborg and Father's Day: "Jasmine's Promo Video" (0:44) and a photo gallery are not nearly as informative as the trailer on the first disc. An extremely short Manborg trailer (0:40) and a "characters sneak peek" (0:25) also can't live up to the one for Father's Day (the fact that this trailer is a full three minutes shorter than the other one is a major contributing factor).

"Karl" (7:08): The title character from Heart of Karl returns in this weird, photo-animated short that I might guess is/was a test to see if they could animate an action figure of Karl rather than using makeup (it works pretty well, in my opinion). I'm not sure I liked it more than the "full" film on Disc 1, but I was maybe slightly less confused by it. Maybe.

"A Word From Uwe Boll" (1:13) and "A Word From Guy Maddin" (1:38): Pretty self-explanatory little gag clips feeaturing testimonials from the two directors (the latter looks like something that would have played before their shorts at film festivals). 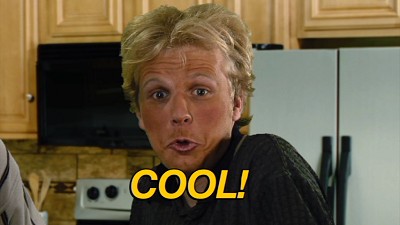 "Addiction is Murder" (21:31): A "pre-astron-6" dark-comic short by Adam Brooks about a man hooked on killing. Brutal makeup effects by Kostanski might bring up some lunches, but it's got a wicked ending.

Easter eggs: astron-6 mentioned on their Twitter feed that there are three easter eggs on the DVD, but I only found one (1:46), on the Disc 2 extras page, which combines gay sex, feminism, and cake.

Disc 2 extras are rounded out by photo galleries on Siam I Am and Nobodies, and Hidden Footage (3:20) on Goreblade (basically, the footage glimpsed in the opening title sequence).

The one thing the disc doesn't include that it really could've used: a picture gallery identifying the recurring cast members from the various productions -- I'm still not sure I had all the names properly matched up to faces after watching all the content on the disc.

Conclusion
In a sea of imitators and replicators, it's always a breath of fresh air to find filmmakers that have ideas beyond the ones they liked in other movies. astron-6 are not for the squeamish, and their sensibilities occasionally jump off the rails, but there's something invigorating about most of the material on these two discs. Paired with Troma's remarkably low price point, this collection is highly recommended.