There's something a little bit off about the 1989 animated feature Little Nemo in Slumberland. The round-eyed, saccharine looking lead characters are straight outta Disney, and yet the film's intricate and surreal imagery call to mind the work of Hayao Miyazaki. Watching it for the first time, and not knowing too much about it, I was under the impression that the movie was a compromised mishmash of a production between U.S. and Japanese personnel. The film is opulently made and entertaining at times, but it also smacks of a shotgun marriage between two companies who had conflicting ideas on what makes a memorable animated feature.

Which, as it turns out, was totally true.

Little Nemo in Slumberland is based on the comic strip of the same name by artist and animation pioneer Winsor McCay. The strip, which originally ran in a few U.S. newspapers in the 1910s and '20s, was probably better known for McCay's wizadry with pen and ink than for its narrative or popularity with readers. The central story of a little boy who stumbles across an enchanted kingdom in his dreams has an evergreen appeal that would've translate well to celluloid in any era, however. 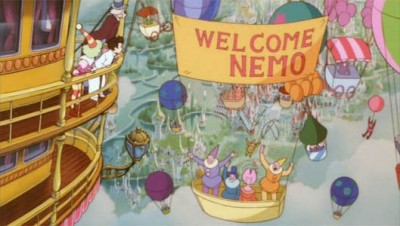 The film centers around Nemo, a bright and curious young boy living with his parents in an early 20th century American town. The first scenes show Nemo in a dream state, riding his bed around town while dodging buildings and streetcars. His dream turns into a nightmare when a locomotive chases after him, waking him up. The next day, he attends a marvelous circus parade which includes an aggressive clown, an older master of ceremonies and a pretty little girl. The following night, many of the people in the parade appear to Nemo (and his pet squirrel) in a dream. Nemo has been summoned by Professor Genius, the parade's organist, to the magical land of Slumberland to be the official playmate of that kingdom's princess, Camille.

Upon Nemo's gala introduction to Slumberland, he is brought to meet the formidable King Morpheus. Morpheus reveals that Nemo was actually summoned to be the heir to the Slumberland throne and gifts him with a magic key. He warns Nemo not to use it to unlock a certain door in the kingdom or terrible things will happen. Nemo is then introduced to Princess Camille and the two, along with a royal page, play around outdoors. He also meets, Flip (voiced by Mickey Rooney), a mischievous clown who leads Nemo on a wacky chase with the Slumberland police force in pursuit.

In the underground caverns below Slumberland, Flip tempts Nemo into trying out his key on the door which Morpheus forbade him to open. This unleashes the dreaded Nightmare King, who escapes and abducts King Morpheus. The rest of the film consists of Nemo's attempt to redeem himself with Camille and the other Slumberland-ites by attempting to conquer the Nightmare King. Flip gets him a map to Nightmare Land, where the two meet a group of shape-shifting goblins who assist them. Once they are taken to the dark bowels of the King's dominion, a powerful magic scepter and "shazama pajama" chant are the only things needed to defeat the gigantic meanie (who looks an awful lot like Fantasia's "Night on Bald Mountain" demon). Can Nemo find the courage to defeat the villain and bring peace to Slumberland? 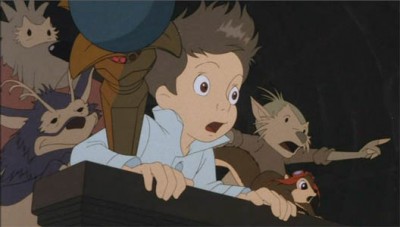 Producer Yutaka Fujioka kept the basic story and characters of the Nemo strip intact for this film, but there are some notable updates in Chris Columbus and Richard Outten's screenplay that were supposed to make the concept more relevant for modern audiences. Nemo's behavior is made more "cute" and relatable to '80s kids, while Princess Camille is given a spunky personality. There's also the addition of the cliché animal sidekick in Nemo's pet flying squirrel, Icarus, a character that didn't exist in the McCay strip. Further attempts to Americanize the film are reflected in several tunes penned by Richard and Robert Sherman, forgettable fluff several steps beneath Mary Poppins and "It's A Small World."

To call the production on Little Nemo in Slumberland tangled is something of an understatement. Fujioka's efforts to bring McCay's characters to the silver screen dated back the late '70s, with an official production starting in 1982. The film then went through planning stages at several Japanese animation studios (including Miyazaki's) with little to show for it, before settling into a joint U.S./Japan production in 1988. Directed by Masami Hata in Japan and William Hurtz in America, it's this uneasy collaboration which finally yielded the finished film - one which didn't see an American release until August of 1992.

The final version of Little Nemo in Slumberland serves as an interesting window into where animation was in the '80s. The film itself suffers from terminal cuteness, bland characters, poky pacing and a vaguely defined villain, but there are spots (especially in scenes involving large crowds and spectacle) where a thrilling, old-style craftsmanship and visual artistry shines through. One can also see bits of Japanese-style surrealism and quirk in a few scenes, like Nemo and Camille's romp in the air above Slumberland. The powers-that-be in L.A. apparently decided that Americans weren't quite ready for full-fledged anime, however. Unlike Nemo at his climactic battle, the filmmakers seemed to lack the confidence to make a truly exceptional film.

A collectors' note: this newer DVD edition of Little Nemo in Slumberland, from anime distributor Eastern Star, appears to be a near duplicate of the previous editions from 2004 and 2009 - only the packaging has been revised. If you already own one of those, you can effectively skip getting this one.

Eastern Star's edition of Little Nemo contains a single Dolby 5.1 stereo soundtrack in a nice, not too showy sounding mix. No other audio options or subtitles are provided.

The image on this feature is presented in a 16x9 anamorphic widescreen image that serves its fantastic imagery quite well. There is a slight bit of fading and grain, and a few random white specks show in the film's darker scenes. For the most part, however, it's a fine looking disc.

A modest bunch of static extras, strictly for the kiddies: character profiles, Nemo's climactic verse used to banish the Nightmare King, sing-along demonstrations for three of the film's tunes, and a "Make Your Own Royal Scepter" how-to which screams out for photographic examples. It's better than nothing, but kids (not to mention adults) deserve better.

Even in the realm of animated epics, few films have ever matched the ambition of Little Nemo in Slumberland. The final product ended up being appealing and often beautifully rendered, but also cliché-ridden and sluggish. This isn't an outright disaster like, say, Disney's The Black Cauldron, but the film's faults (and there are many) ultimately make it a semi-interesting curio of 1980s animation worth at least one watch. Rent It.