My introduction to Hetalia was at a small FUNimation panel bunkered in the depths of DragonCon, 2010. The instant the trailer began, the gaggle of cosplaying teenage girls sitting next to me squealed and stomped with glee. SQUEEEEEE! The banshee cries did not let up through the entire trailer. My eardrums rang cries of mercy. I tuned out the trailer, more concerned with protecting what was left of my sanity than what was on the screen. For two years, I dismissed Hetalia as a teeny-bopper, yaoi-infested, girls' show and never gave the show a second glance. How wrong I was.

Imagine a history lesson where each country was a character with all the countries' stereotypes, idiosyncrasies, and dysfunctional relationships. Now imagine that this history lesson was taught by a Japanese manga writer. Unrelenting, maniacal hilarity ensues. 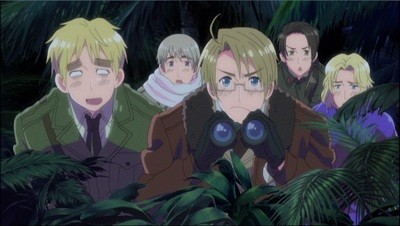 On the surface, Hetalia appears to be a simple gag show. Hetalia keeps its skits light in this twisted retelling of history in randomly placed, five minute increments. Dig a little and each episode of Hetalia reveals its metaphorical brilliance. Most of the skits in Hetalia are allegories based on actual historical events or various countries' relationships--the focus is on Germany and Italy's relationship in World War 2. An overarching plot across the series is practically nonexistent. The short episodes jump all over history's timeline. Blink an eye and an you can go from post-World War 2 to ancient Rome.

Hetalia unapologetically stereotypes and makes fun of everyone--Japan and America included. Britain is bland and stuffy. France is arrogant and overly concerned with fashion. Canada is America's aloof and ignored twin brother. You get the idea; no country is spared from the series' lighthearted wrath. If you can't find humor in stereotypes about your nationality or any others, then don't even bother with Hetalia. 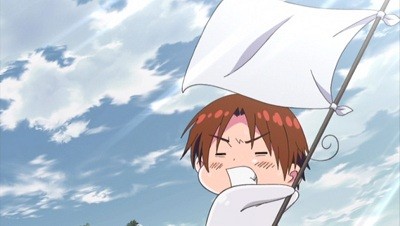 The whole point of the Hetalia is seemingly to joke on poor Italy, the central character of the show. The word Hetalia itself is a jab at Italy. It's an amalgamation of the Japanese word hetare ("coward") and Italia. The show portrays Italy as a wimpy, but affable, character who loves pasta and women. His weapon of choice: a white flag. When faced with any confrontation Italy frantically waves his white flag and cries for Germany's help. In other skits called Chibitalia, Italy is personified as a little boy who dresses like a girl, which represents a young, naive Italy rising from his/her Grandpa Rome's downfall. If anybody is ever going to be offended by this show's content, it's Italians.

Italy serves as Germany's lovable, but useless, sidekick throughout the series. Germany is a serious, ambitious militant who takes Italy under his wings because of his grandfather's (Rome) reputation. Big mistake. Regardless of Germany's efforts to get Italy to man-up, he can't help but be a helpless, loveable buffoon. The other Axis power, Japan, is portrayed as reserved, polite, and incredibly bland. Japan's accent is a highly exaggerated "Engrish" that's bound to offend somebody, somewhere. It's surprising that the country where Hetalia originates has the least compelling character in the show. Even tiny Sealand has a more interesting character. 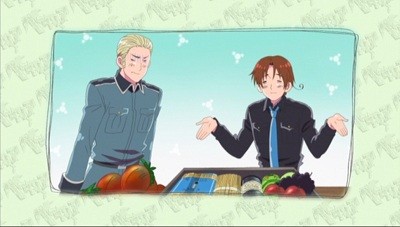 As an American, it's fascinating to see how others stereotype our nation. In Hetalia, America is an arrogant, attention-whore who views himself as a superhero ("I'm the hero!"). He stuffs his face with mountains of hamburgers and sodas and wonders why he's putting on weight. America doesn't listen very well and staunchly believes that things have to be a certain way or it's all wrong. He often needs to be physically restrained from confrontations with other countries to "teach them a lesson." America sometimes affects a dude-bro personality that isn't nearly as funny as when the character is played straight. But I'm also biased against dude-bro's. 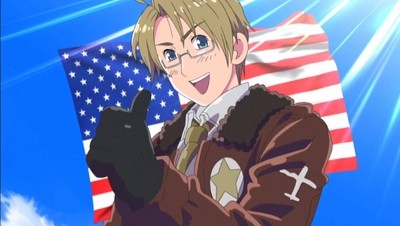 The major issue surrounding Hetalia is whether it goes too far. It's only offensive to viewers who are actively looking to be offended. Hetalia's producers created playful caricatures based on well-established, national stereotypes. The result is a comical, and often brilliant, series that highlights the absurdity of these nationalist preconceptions. If one nation was presented as the ideal, perfect character whereas all the rest were fatally flawed, then you could argue that Hetalia is offensive or dangerous. No nations, however, are spared from the good-natured ribbing; the comedy is so over-the-top that it's difficult, if not impossible, to take the show seriously. In a wise decision, Hetalia either glosses over or completely ignores many dark historical events such as Nazi Germany (Hitler is only referred to in passing as Germany's crazy boss), the Holocaust, Hiroshima, and Japan's atrocities against the Chinese. If a viewer uses Hetalia to shape their worldview, then they have much larger mental issues than whatever damage watching this series caused.

Hetalia's premise is one of the most unique that I've ever seen. My only critique is the lack of a coherent storyline throughout the series. The show would've been even better if it took place in chronological order--keeping track of where the show is in historical context is an exercise in futility. That's a minor quibble considering that I've never laughed so hard and so often at an anime series. To detail any of the gags would be an injustice. They simply have to be seen in all their glory. A few skits, such as the ongoing revelations about America cleaning out his closet, are dull and mercifully short. The majority of episodes, however, brim with nonstop laughs and somehow charming characters. I can't stress enough how shocked I am to write this next sentence. I friggin' loved Hetalia! 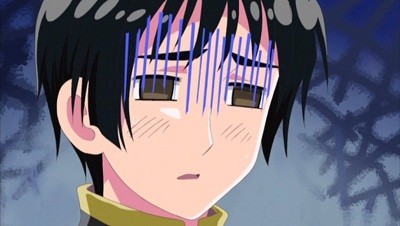 Sound: The DVD set includes an English 5.1 Dolby Digital surround track and a Japanese 2.0 track. I didn't listen to the Japanese track, but the English track was solid. I didn't notice much use of the surrounds--this series is dialogue-based so most of the action is in the front stage.

The English voice acting in Hetalia stands among the best performances in all of anime. All of the character accents are so ridiculously exaggerated that it's difficult to take any character serious. And that's by design--Hetalia could easily be a highly offensive series in poor taste if taken the least bit seriously.

Catchphrases abound in this series and quoting them is an addiction. After finally seeing the show, many of the lines that I hear at anime conventions make complete sense. Italy, as portrayed by Todd Haberkorn is the highlight of the series. The accent is completely over-the-top and affable. He so perfectly captures the character that I can't fathom Italy sounding any other way. Eric Vale's invocation of Ash Ketchum in his portrayal of America is a highly quotable standout performance. Christopher Bevins' Japanese accent is perhaps the only memorable trait of that otherwise forgettable character.

Video: Hetalia is presented in 1.78:1 aspect ratio. The video quality is above average for an anime series. Several instances of artifacting are present and expected considering the amount of video compressed on each disc. Overall, Hetalia is a vibrant and colorful show. The Chibitalia skits are especially appealing with their watercolored, storybook backgrounds.

Extras: At first glance this DVD set appears overstuffed with extras. It even has two separate extras discs. The actual content is disappointing only because my expectations were so high. The set includes voice actor commentary tracks for select episodes. Unmoderated voice actor commentaries are typically filled with unfocused, but absolutely hilarious, banter and Hetalia's commentaries are no exception. Japanese director Bob Shirahata discusses story boarding each episode. The season two extras disc includes multiple interviews between Bob Shirahata and the Japanese voice actors for Prussia, Little Italy, and Italy.

As a History Channel nerd, I was pumped to see "The Hidden History within Hetalia" listed as an extra. I set aside an entire evening to take in all the extras on this set and saved this feature for last: the crown jewel. I was horrified to discover that my expected documentary was merely textual descriptions about the historical events behind each episode. It's fascinating, but FUNimation added no method of skipping to the background info of a specific episode. This would have been a serious issue if "Hidden History" was provided for each episode--FUNimation gave up on this entire feature by episode 16. The "Hidden History" feature begs for a skip-to-episode button and should have at least a paragraph for each episode. FUNimation missed a huge opportunity for cool points with this extra.

Also included are textless credits and trailers for other FUNimation releases.

Bottom Line: Hetalia is hilarious. I had more laughs with this DVD set than any other anime I've ever seen. It's complete lack of a coherent plot and frantic pacing affects its watchability over long time periods--take this 52 episode set in 20-30 minute doses when you're pining for a laugh. Preferably with your favorite adult beverage (Kirin Ichiban mixes phenomenally well with Hetalia).

I take back all the hatred I espoused about this title before actually watching it. It may occasionally venture into offensive territory for some, but put aside your sensitivities and have a laugh at yourself and the rest of the world. Highly Recommended.