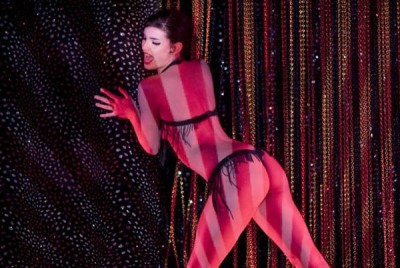 Few clichés are more shopworn than "I'm not a stripper, I'm a dancer," but the women who work at the Crazy Horse cabaret ("the best chic nude show on earth") are dancers, and good ones. It's not a bump-and-grind show; their routines are tightly choreographed and impressively produced, utilizing trick lighting and ingenious staging "to suggest, to seduce, without offering oneself."

Distinguished documentarian Frederick Wiseman shot Crazy Horse during a transitional period for the club, as director/choreographer Philippe Decouflé was greatly reworking and changing the nightly show, trying out new material while keeping the regular program in rotation (his plea that "a break is needed to ensure a classy premiere" is ignored). Wiseman's cameras observe events backstage and at rehearsals, production meetings, and costume fittings; as usual, he does not interview his subjects directly (though he does eavesdrop on other journalists interviewing Decouflé and artistic director Ali Madhavi, and uses that footage, which is a bit of a cheat).

And he shoots the nude dance numbers--a lot of them. (It is possible to have too much of a good thing; the film runs a too-loose 134 minutes.) The performances are frequently seen in single, unbroken takes, as pure documentary, but he occasionally breaks them up, shooting with the care and precision of old Hollywood production numbers, which seems appropriate. Either way, when sharing what they do in the live show, Wiseman somehow manages to honor the work ethic without neutering the eroticism; this isn't one of those artsy examinations of the libido that takes all of the fun out of sexuality. It's a dirty, sexy picture.

Yet it is one that understands how much work goes into arousal. His first shot is of shadowplay, a man creating hand puppets against a screen, followed by a pretty blonde in a recording studio, faking an orgasm into a microphone. Then, after that, we see the dancers backstage, applying make-up. It's all the same thing, the juxtaposition tells us. It's all pretend. It's all for show.

There's probably as much rehearsal footage as performance, and it serves two purposes. First, and most obviously, we see the labor of the creative process. But more than that, by seeing the dancers clothed (scantily, but still), we can appreciate the skill of their art without the distraction--lovely though it is--of their nudity. These are serious performers; at one point, Wiseman catches them breaking the monotony by watching a compilation tape of ballet bloopers, the kind of thing dancers dupe and pass around. We don't need any of them to tell us they've got traditional training--it's clear from the way they move, and the visual language they speak.

Wiseman, it must be noted, doesn't always treat them well. His close-ups are sometimes disembodied to a troublesome degree, like a striptease that is seen only from the mid-torso down (as if a face isn't at least among the most interesting things to watch during that act, for better or ill). The film gets better about this as it goes along, but the director frankly doesn't seem all that interested in getting to know these women beyond their shape.

Maybe he's just taking his cue from the subject matter. For all of the skill and artistry involved in doing what they do, the priorities are made clear near the end of the film, as Wiseman watches auditions for new dancers. They are given instructions, to be loose and have fun, with a parting word of advice: "And push your buttocks out." One by one, and then in a large group, the women stand and posed as they are appraised. The camera holds on them as the staff whispers judgments and objections. It's a dirty business.