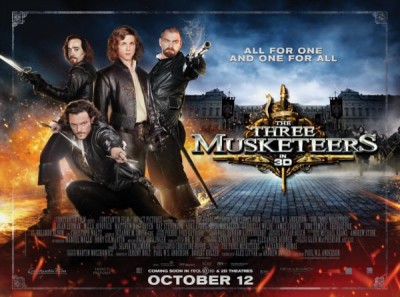 The tale of The Three Musketeers, birthed in Alexandre Dumas' 1844 novel, has been done to death on film. There are over twenty adaptations of the story, including The Three Musketeers starring Douglas Fairbanks, Disney's The Three Musketeers and The Musketeer, which added Asian fighting to the mix. Now, Paul W. S. Anderson, the man behind Event Horizon, Mortal Kombat and Resident Evil, has created yet another update, cleverly titled The Three Musketeers, that finds the trio fighting to stop a war between England and France. The story is preposterous and acting forgettable, but the impressive costumes, lively visual effects and the film's playful tone save it from obscurity.

Athos (Matthew Macfadyen), Porthos (Ray Stevenson) and Aramis (Luke Evans), the three musketeers, are forced to disband by Cardinal Richelieu (Christoph Waltz) after they are betrayed by Athos's lover, Milady de Winter (Milla Jovovich), who is loyal to the Duke of Buckingham (Orlando Bloom). Richelieu wants the musketeers killed for stealing airship blueprints drawn by Leonardo da Vinci, but France's King Louis XIII (Freddie Fox) and Queen Anne (Juno Temple) decided to allow the musketeers to once again defend their country. The trio is soon joined by D'Artagnan (Logan Lerman), a boy looking to follow in the footsteps of his father, who was once a musketeer.

From the get-go, it is clear that Anderson did not set out to make an overly serious adaptation of The Three Musketeers. The camera playfully follows Milady as she ducks and dives around booby traps to reach the airship plans in the opening scene. The gunfire and explosions are rapid, Jovovich's corset is tight and the humor borders on slapstick. When Milady betrays the musketeers, their reaction is basically "aw, shucks," and they mope back to their 17th century frat house to carry on. The musketeers are initially hostile toward cocky D'Artagnan, but warm when they witness his fighting skills, which come in handy when brawling with the cardinal's guards.

The conflict involves framing Queen Anne for a concocted affair with the Duke of Buckingham, who represents England in France, which would cause King Louis to declare war on France. The musketeers are sent to curb the deception, but encounter resistance from Capt. Rochefort (Mads Mikkelsen), who operates an armored airship for the cardinal. These fantastical airships provide the unique opportunity for midair battles, and, while the sword fighting is fairly generic, the mile-high battlefields heighten the excitement. The Three Musketeers chooses to embellish history with these giant airships, but uses visual effects to recreate 17th century London and Paris. The costumes are elaborate and colorful, and the film name drops historical figures whenever possible.

Anderson keeps the pace brisk, and The Three Musketeers settles on being a royal soap opera with action and gags. The script could have been a lot better; much of the dialogue between the musketeers is meant to be snappy but feels stale. None of the musketeers makes much of an impact as the characters are thinly drawn, but D'Artagnan gets a bit more screen time and some better one-liners. Bloom hams it up royally in his few scenes, and Jovovich cannot help but look a bit bored. Maybe she lost a bet to husband Anderson and had to appear in his film. The Three Musketeers breaks little new ground, but there is nothing especially wrong with the film. In the long line of film adaptations, you could do much worse than Anderson's eye-popping entry.

Summit's 2.35:1/1080p/AVC-encoded transfer for The Three Musketeers is quite solid. The film was shot digitally and is subsequently without grain, but the image still appears very film-like. Detail is excellent and justly rewards the elaborate costumes and visual effects-assisted sets. Contrast is generally excellent, though highlights are a bit bright, and colors are bold and well saturated. Facial detail is excellent in close ups, and wide shots, while given every opportunity to display banding or compression noise, are razor sharp.

The 5.1 DTS-HD Master Audio soundtrack is as strong as it should be considering the recent production. Dialogue is crystal clear, effects are impressive and the score is rich and expansive. This mix is quite immersive, and the mid-air battles and castle sword fights allow the soundtrack to impress with hefty LFE response and active surrounds. Range is excellent, and clarity is as strong during intimate scenes as it is during action pieces. A Spanish Dolby Digital 5.1 track is also included, as are English SDH and Spanish subtitles.

This single-disc release comes in a Blu-ray eco-case that is wrapped in a slipcover. A separate Blu-ray 3D version is also available. Summit includes a bunch of bonus materials, the most impressive of which is an excellent picture-in-picture track. Access: Three Musketeers (2:21:02) runs a good half-hour longer than the film thanks to several segments that pause the film to provide more detail. This PIP track is well produced, with handsome menus and a helpful legend, and includes cast and crew interviews, behind-the-scenes footage, effects comparisons and interesting trivia. There is little time when something is not popping up on screen, and the track effectively covers the film's production. Also included are a few featurettes: Paul W. S. Anderson's Musketeers (2:29/HD), Orlando Bloom Takes on the Duke (1:59/HD), 17th Century Air Travel (2:20/HD) and Uncovering France in Germany (2:14/HD). The features conclude with a handful of deleted and extended scenes (14:18/HD) and BD-Live Access.

Did the world need another film adaptation of Alexandre Dumas' The Three Musketeers? Perhaps not, but Paul W. S. Anderson's take on the story is innocuous enough, with impressive visual effects, a quick pace and ample humor. The central trio lacks personality and their quest to stop a war between England and France is silly, but The Three Musketeers is entertaining while it lasts. Summit's Blu-ray offers great picture and sound and an excellent picture-in-picture track. Rent It.