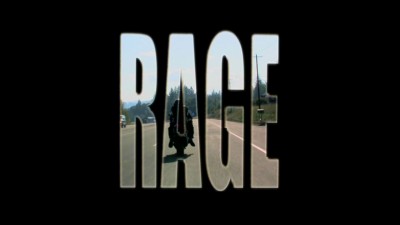 Few places inspire more hate toward fellow man than a crowded parking lot. All of us have plotted revenge on a rogue parking-spot thief, and most of us have been the culprit ourselves a time or two, intentionally or not. Dennis Twist's terrible, horrible, no good, very bad day begins when he accidentally swipes a parking spot from a waiting motorcyclist. The leather-clad and helmeted biker shows the obligatory frustration and moves along, but returns throughout the day to terrorize Dennis in increasingly violent confrontations. Like a more intimate Duel, Rage has a villain willing to go to great lengths to avenge an unintentional affront. Written, directed and produced by Christopher R. Witherspoon, Rage is a tense, accomplished independent thriller.

Before his parking-lot confrontation, Dennis (Rick Crawford) leaves an adoring wife, Crystal (Audrey Walker), at home so he can end things with his mistress (Anna Lodej). 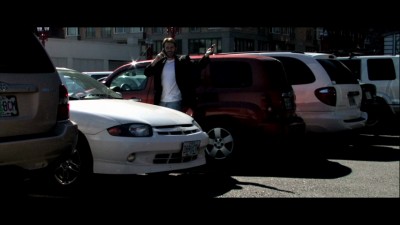 Dennis is going to meet her when he angers the biker, who at first stares down Dennis from behind his helmet and sounds his horn before speeding off. Rage quickly paints Dennis as an unsympathetic character, but that changes when the biker returns to sit through a green light in front of Dennis and key his car. After that, shit hits the fan as Dennis and the biker engage in physical and psychological warfare.

Where Steven Spielberg's Duel partially obscured its antagonist inside a giant eighteen-wheeler, Rage puts its monster out in the open. The motorcycle allows for nimble maneuvering, and the helmet is a compact and effective identity shield. There is something primal about someone who completely ignores societal norms and structure. The biker in Rage is unshakable, and returns time and time again, without fear of injury or arrest, to brutally terrorize his victim. Truly frightening is the notion that all of this may stem from Dennis' simple parking-lot transgression, and the comfort of identifying the biker is denied to Dennis on several occasions. 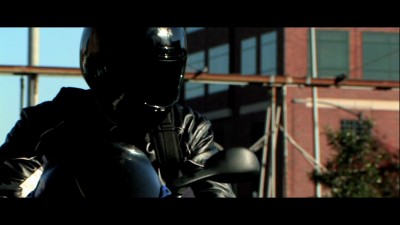 Quality mainstream thrillers are few and far between, so it is nice to see an independent filmmaker create such an accomplished product with limited resources. Rage is as well shot, edited and acted as most mega-plex fare, and the filmmakers clearly have seen and respect genre favorites like Duel, as well as classic horror like Halloween. Witherspoon also fills the shoes of the biker, but pinning down the identity of the villain is never the point. The senseless torment climaxes in a violent showdown at Dennis' home, where his wife becomes unpleasantly involved in the conflict. This bedroom scene is particularly tense and disturbing.

Bad things can happen for no reason. Dennis initially seems to deserve a little torment, but what he gets far outweighs any of his sins. Rage gradually builds suspense before releasing the pressure in an unsettling, violent climax. The film has solid production values and good performances, and the mysterious biker is a pitiless villain. Rage is frightening in its depiction of unsolicited violence and torture, and is a fast-paced, exciting thriller.

Big Screen Ventures' screening disc for Rage does not include the final transfer, soundtrack or extras. If a retail copy becomes available to me in the future, I will update this review accordingly. 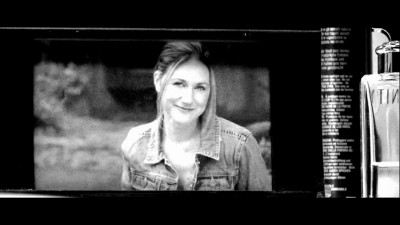 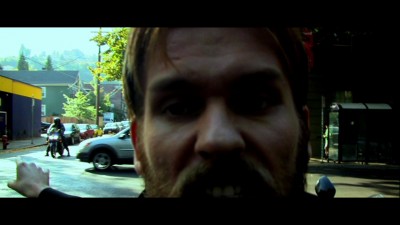 With roots in thrillers like Steven Spielberg's Duel, Christopher R. Witherspoon's Rage is an intense game of violence and torment between a cloaked villain and his prey. After a young husband has a minor parking-lot confrontation with a motorcyclist, he is cruelly stalked by the helmeted rider and subjected to violence that spreads to his friends and family. Rage has great production values, and lead actors Rick Crawford and Audrey Walker are convincing in their roles. Rage asks more questions than it answers, but the film is a refreshingly straightforward and tense thriller. Highly Recommended.