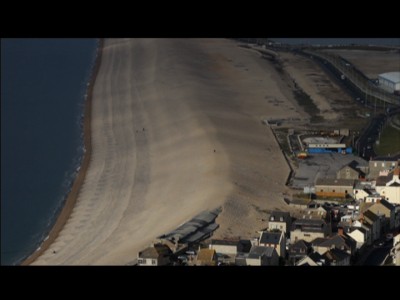 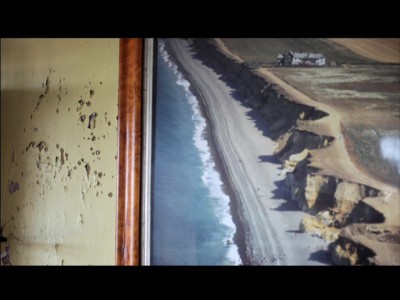 "I wanted to look at the enigma of England, its island mentality and complicated relationship with its past. Contemporary England springs from a history of colonial adventures, military ambitions, industrial prowess and a rigid hierarchy. Now it is also defined by its waning power and role in modern geopolitics. And it can be a gratifyingly odd place." - Seamus Murphy, from his introduction to the Let England Shake DVD

When the great rock singer/songwriter PJ Harvey was in the midst of making her most recent album, the Mercury Prize-winning Let England Shake, she came upon A Darkness Visible, an exhibition (and later book) of war-reportage photographs from the United States' war in Afghanistan by the acclaimed Irish-born, London-based photographer Seamus Murphy. Harvey's own thematic preoccupation on her incredibly affecting, sobering, near-perfect album was, for the first time in a singing/playing/songwriting career marked by incomparably inner-directed explorations of matters of the heart, an externally directed, "geopolitical" project, each of its songs telling one story or another from the increasingly urgent and murderous armed wars and conflicts Harvey was aware of in the world around her--all the inevitable human cost, trauma, and emotional fallout that seemed (and still seems) to grow exponentially by the month. She was apparently so taken with Murphy's incredibly observant eye for both the factual and the atmospheric, as well as the irresistibly appropriate dovetailing of what his work was about with the thematics of what she was currently making, that she commissioned him to create a short film for each of the album's dozen tracks, which would be introduced via her website at intervals leading up to and immediately after the album's release. Now those shorts have been collected on a DVD, Let England Shake: 12 Short Films by Seamus Murphy, and the disc is both a must-add for the collection of anyone whose musical frame of reference has already been enriched by an inevitable love of Harvey's work as well as an excellent, visually sublime introduction to one of our most vital musical artists for any unfortunate soul who may not yet have heard or paid attention to her. 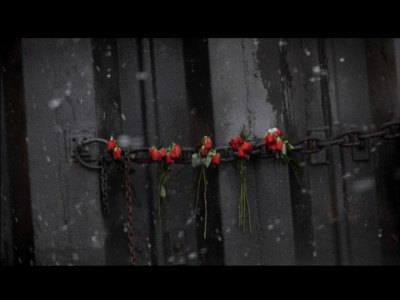 Murphy shot all of his footage on clean, vivid HD digital video, which has been masterfully color-corrected and edited to the album's music by him and editor Sebastian Gollek. The images were all found as Murphy traveled throughout England--his home, but a place that, as a roving international photographer, he had seldom documented--on a rambling trip he took expressly for that purpose, and though they are absolutely, thankfully not any sort of literal match for or visual interpretation of what is in the songs, they could not be more tonally and thematically perfect. Many of the tracks on the album adopt an idiosyncratic and utterly moving mixture of a sardonicism toward England's checkered colonialist past, dubious present, and uncertain future and a sweet, yearning, self-critically patriotic love for what is after all a beautiful and interesting country--one that both Murphy and Harvey call home, and one for which they both clearly have strong (if very mixed) emotions; Murphy translates this with a visual ingenuity that is apparent from the beginning and doesn't let up until the final image of the last song. As one example, for the opening track, "Let England Shake"--a bemused observation of an England adrift in blissful, passively destructive indifference and forgetfulness--the images Murphy brings in are a desolate, vaguely sinister carnival during daytime off-hours cut in with a riderless carousel that comes to glowing life in the night. 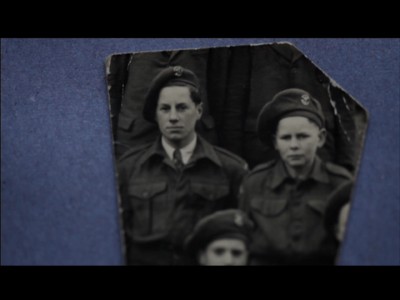 The clips are cut significantly faster than many films, but Murphy is not beholden to the trivializing precepts of music-video editing. One memorable moment, created as a reflection of the dirge-like, groaning-horn-driven final 60 seconds of the album's devastating centerpiece, "All and Everyone," consists of a single unmoving, sustained, extremely wide overhead view in which we see a boat launched and floating across the very bottom of the image, otherwise a vast, blank patch of sea. In other cases, he goes in for full-on abstraction where appropriate: As the thumping-rhythmed opening bars of the castigating "The Glorious Land" are suddenly overlaid with an achingly gorgeous guitar melody, Murphy shifts focus on our view of rapidly passing trees shot from a car below so that they become a blurred movement timed to the beat of the music, which looks like something out of Stan Brakhage. Sometimes he cuts in a Bergman-like close-up of an especially evocative, stoical, aged, or otherwise full-of-character human face, as in "On Battleship Hill," which features what appears to be the visages of immigrants from the war-torn former Yugoslavia living in England--an impression we are clued into when the clip opens with a despondent and disheveled-looking man looking into the camera and reciting the song's opening lyrics in broken, Eastern European-accented English. (This recitation device is repeated to great effect on several of the clips, with the lyrics delivered to the camera before the song itself comes up by figures ranging from a very ordinary-looking and -sounding young Englishwoman to an absent-minded older gentleman to a rough-sounding lower-class Cockney lad to a subtitled Iranian immigrant). 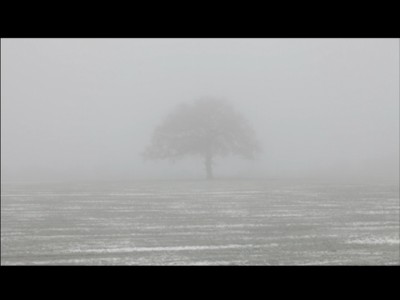 There is much stark, precisely described nature used as backdrop for the human carnage Harvey limns in her lyrics, and Murphy has found some of the most surpassingly beautiful images from England's storied natural world--seaside and mountaintop, field and forest--to accompany her sung evocations of (usually battle-ravaged) hills, copses, and beaches. He takes us under the murky water for a look at creepily serene marine life, gives us plentiful variations on the distinctive ways in which waves meet sand on the multifarious shores of Blighty, the shadows of rolling clouds over golden plains.... If you are a fan of Terrence Malick or Andrei Tarkovsky, your appetite for that kind of meticulously composed cinematic representation of all the mystery and symmetry Nature has to offer will be well and fully slaked by the almost overwhelming beauty of what Murphy has turned his camera eye to, and the humbling, awe-inspiring, often near-spiritual way in which he's filmed it. 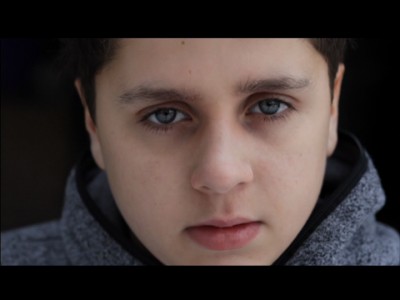 All of this beautiful, conscientiously-assembled imagery is very sparingly spiced with footage of Harvey performing the songs solo with a guitar or autoharp in a modest, pretty studio with maps on the walls, lit by an evening sun coming through the window, providing another visual dimension that complements rather than disrupts the flow (even when, as in "The Words That Maketh Murder," the sound purposely drops for one "live" verse, with Harvey singing and playing straight to us in direct sound, before coming back up and rejoining the studio-recorded song playing over the non-Harvey video material). Harvey's voice and musical sounds are, of course, the driving force for the whole thing, and the album easily stands on its own as a complete and essential work of art. But Murphy's photographic voice harmonizes beautifully with Harvey's musical one, and although the music doesn't need the visuals for its richness, neither do these images leech off of the music for their power; they can be considered apart from, but are perfectly in keeping with, the music and its meaning(s). (Unusually for Harvey, she has the voices of her entire band singing along with her in many of the songs, so the addition of another voice, and another kind of voice, to create a supplemental visual layer for the album feels even more apt). What Let England Shake: 12 Short Films by Seamus Murphy represents in the end is the literally awesome collaboration of two amazingly insightful, incredibly inspired, disciplined, magnificently expressive artists on a hybrid work that combines into a whole new kind of beauty the already amazing, whole-by-themselves, stand-alone parts it's comprised of. It's an overwhelming experience that reaches the heights of the best, most admired non-narrative short works of its kind, by the likes of Kenneth Anger (Scorpio Rising) and Chris Marker (La Jetée); it is simply not to be missed by anybody interested in either the cream of that cinematic crop or the very best that contemporary popular music has to offer. 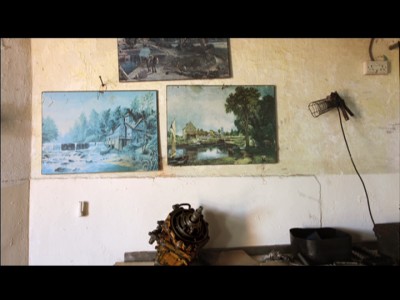 
The films were shot in digital video, which means that their transfer to DVD is relatively unmarked by any kind of compression artifacting, aliasing, edge enhancement, or problems with dark/black scenes, vividness of color, or correct naturalness of skin tones. The one complaint one might have is that the films' widescreen (it appears to be an approximately 1.78:1 aspect ratio) presentation is non-anamorphic, but as the films were originally designed to be viewed on the smallest of screens, even a non-anamorphic release to disc gives them to us many times enlarged from their "original" size as viewed on the Web, with very notably increased visibility of all the details in Murphy's singularly visionary mise-en-scène.


The people responsible for the DVD's sound have created a nicely rendered, perfectly clear and rich PCM 2.0 surround soundtrack, but as something of an popular-music purist, I insisted on switching my receiver to straight two-channel stereo, which is of course the way the music was originally mixed and the way it is heard any time you play the CD, and thus the only way it sounds "right" to me. That being said, the sound is of excellent quality any way you play it.


The only extra on the disc itself is a bonus 13th film, a live home-studio recording of the track "England." The packaging is an unusually nice, well-designed trifold affair that contains an introduction by Murphy and a booklet describing his responses to each track on the album along with his thoughts when it came to capturing and choosing the images with which to associate each piece of music. 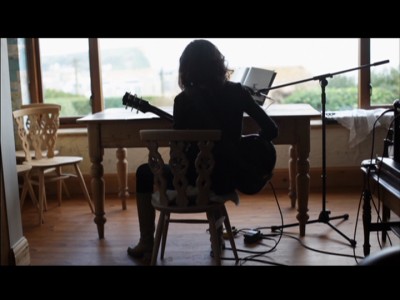 
I have seen some very cinematic music videos in my time (yes, I'm old enough that I remember when MTV really showed mostly music videos all day long), but I do not believe I have ever seen images and sound matched together (at least not in the recorded-music-promoting context) in the way they are by Seamus Murphy in his 12 exquisite short films for PJ Harvey's superlative Let England Shake album. The "short films" categorization isn't pretension; these clips work as music videos, but they have an imagistic life all their own that easily earns them a consideration as bona-fide cinema. It is as if Murphy has gone into Harvey's songs and carefully drawn out the visuals latent within them that would most perfectly evoke their emotional and thematic tone (while never stooping to any literalness, dramatization, or "interpretation"), allowing the power of their themes and of Harvey's brilliant musical-emotional perceptiveness to emerge in a miraculously seamless and complementary way. This is the work of one great artist coupled with that of another using the utmost care and perfect intuitiveness, and the result is almost too much; it's the kind of artwork one finds oneself at once marveling at, profoundly affected by, and finally, after the last note is played and the final image goes dark, actually grateful for. Highly Recommended.