Cast Me If You Can

Other // Unrated // January 24, 2012
List Price: $19.95 [Buy now and save at Amazon]
Review by Stuart Galbraith IV | posted January 23, 2012 | E-mail the Author
Mild but nonetheless enjoyable, Cast Me If You Can (Wakiyaku monogatari, or "Story of a Supporting Role," 2010) is a Japanese romantic-comedy about a journeyman actor and his relationships with his famous playwright father and an ambitious but abrasive young actress. Though highly predictable and a bit artificial, it's hard to dislike.

Japanese-born but Harvard- and MIT-educated Atsushi Ogata wrote and directed it with an obvious eye on the Western market. The DVD may very well be identical to the Japanese release. Menu screens are in both English and Japanese, and Ogata provides two audio commentary tracks, one in each language. Oddly, the box makes no mention at all about these and other extra features. 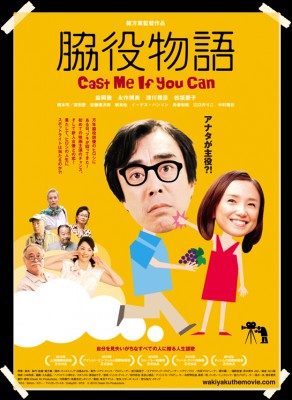 Hiroshi Matsuzaki (Toru Masuoka, I Just Didn't Do It, Toad's Oil) is a busy but virtually anonymous supporting actor, living in the shadow of his acclaimed playwright father, Kenta (Masahiko Tsugawa, A Taxing Woman, The Strange Tale of Oyuki). Hiroshi is steadily employed, and currently playing a policeman on the trail of a serial killer in a continuing television series, but instead of being recognized, the public constantly mistakes the bland-faced but vaguely familiar Hiroshi for anonymous workers: convenience store employees, salesmen, security guards and the like.

In an early scene, Hiroshi tries to chase down a middle-aged woman, Mrs. Kuroiwa (Keiko Matsuzaka), who has accidentally dropped a bouquet of flowers. Instead, Hiroshi trips and falls at her feet, an image captured by a tabloid photographer. It turns out that she's the wife of a prominent MP, and the tabloid accuses them of having an illicit affair. The scandal results in him being fired from what was to have been his break, playing the leading role in a remake of a (never identified) Woody Allen movie. (Stranger things have happened).

Meanwhile, Hiroshi meets a cute but highly-opinionated, in-your-face aspiring actress, Aya (Hiromi Nagasaku, Funuke Show Some Love, You Losers!), whose dentist lover walks out and leaves her virtually homeless. She and Hiroshi are near-total opposites: he's kind-hearted but reticent and introverted while she's perky, argumentative, and talkative. But Hiroshi's breezy father, whose perennial smile and sociability is unexpected - In movies aren't genius writers always antisocial misanthropes? - is fond of Aya and has no problem with her request that he cast her in his latest play.

Since the collapse of the Japanese film industry in the early 1970s, they've perpetually struggled to rediscover their voice. In recent years, Japanese comedies tend to be either outrageously broad, in hard-to-take movies overrun with ubiquitous "talent" drawn from the music industry and TV talk shows, or they opt for a kind of wry minimalism in the Jim Jarmusch mold, that director being hugely influential on filmmakers here for decades. Cast Me If You Can is more the latter than the former, but without the strained affectations of most such films. For Western audiences with limited exposure to the genre, its approach is in the same general ballpark as Shall We Dance? (1996) though it's neither as good nor pretentious as that was. (Most of the pretentiousness was cut for the U.S. release version of that film.)

To Ogata's credit, Cast Me If You Can's strengths are its characters and engaging story, and the actors are appealing. It's a little too mild for its own good, and a bit too broad and predictable elsewhere. Unlike Shall We Dance?'s similarly lost salaryman hero, I never entirely believed Hiroshi as a living, breathing character.

Those more familiar with Japanese film will find other elements amusing, such as the brief appearances by Gajiro Sato, the dim-witted Genko from the "Tora-san" series, as Hiroshi's eccentric manager, and iconic '60s gaijin actress Edith Hanson (Young Guy of the Alps, Gamera vs. Giron) as a mysterious foreigner. Keiko Matsuzaka (Fall Guy, The Gate of Youth) is like a Japanese Meryl Streep: though pushing 60 somehow late middle-age only seems to enhance her beauty.

As mentioned above, I suspect MVDvisual's release is identical to the Japanese DVD version. This is region 1 encoded, but on my player at least it defaults to Japanese audio without English subtitles, so viewers will need to either hit the subtitle button on their remote or access them through the menu screen. Japanese copyright warnings, ads for Japanese DVDs, and bilingual menu screens further support this theory. The 16:9 enhanced widescreen image, approximating its 1.85:1 theatrical version, is okay but much digital break-up is in evidence. Those watching the film on smaller monitors might not notice this, but on large widescreen TVs digital blocking is highly visible, such as a gunfire scene at 36:30 and another where Hiroshi is seen running at 72:08. The subtitles are above average, however, and the Dolby Digital 5.1 Surround is exceptionally good, with much directionality.

The label erred in not noting the DVD's numerous extra features, all of which are interesting and worthwhile. Ogata provides two audio commentaries, one in Japanese with no English subtitles, one in English with no Japanese subtitles. Ogata's earlier short film, Eternally Yours (2006), also starring Masuoka, is included. It's matted but not enhanced, but it does offer English subtitles. It runs just shy of 15 minutes.

Also included is a 16:9 enhanced "Making-Of" featurette (6 minutes), but it's in Japanese only. So is a Q&A with the cast and crew at the film's premiere, running 25 minutes. Finally, English and Japanese versions of the same trailer do a fine job selling the film's charms.

Cast Me If You Can is gentle, predictable, and ultimately appealing. While not an overwhelming success it's entertaining enough to be Recommended.