Okami-San and Her Seven Companions is a pretty straightforward genre anime show. You have a school-setting with the Otogi Academy being the place of education and there's something that seems unusual about most of these school students. There's a school club where the students of Otogi are willing to do useful tasks requested of fellow students and the price is that the club be paid for the services at some point in time. Pricing isn't discussed as much, though. It is in this club that Okami-san resides. She is strong-willed, intelligent, and a leader of the group. Joining her in these quests to help fellow students are her friends and a school-boy who crushes on her the entire show. Most of the characters go on little quests throughout the show and adventures ensue.

The most unique thing about Okami-san is probably that it has a narrator in the Japanese dub version who always talks over people without fail. This aspect was added for comedic affect. Sometimes it was an annoyance to me and at other times I barely noticed the awkward voice-over dubbing that became an inherent aspect of the series. Surprisingly, the English dub was used as an opportunity to altogether remove this aspect of the series. Your mileage may vary; however, I'm expecting some fans to be thrilled and others annoyed by this decision.

It's been a while since I've seen an anime series that wasn't particularly mediocre, spectacular, bad, or good. I wouldn't say it's an exact combination of all of these things. Nor would I refer unabashedly to this series as something well-made or uniformly awful. It would be especially unfair to simply refer to the show as mediocre - taking that route would be all so easy but not accurate or useful, because this is a series that somehow finds a way to defy any expectations.

You bring to the show your knowledge base of anime and the medium. It brings some minute rewards for the faithful. Sounds simple enough in a way, but it's more complicated than that. Actually, I'm having a hard time putting into words the exact reaction I had to this particular example of not-quite-there anime because it never managed to do much for me as a series in perspective. I had a nice enough time watching it. In essence, the most favorable thing I feel should be said about this series is that you'll likely enjoy it... enough. For many, I doubt the reaction of enjoying something "enough" serves as a particularly successful endorsement of high-quality. It's a been-there-done-that-and-done-better type of series. Saying so gave me a headache, to boot. 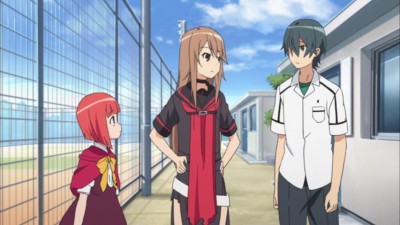 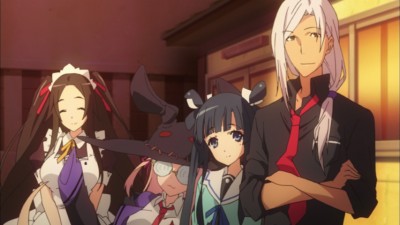 The series doesn't go too many places, ultimately. There are a couple of episodes in which the group becomes confronted by some menacing opponents of another school; these characters in fact seem to have confusing backstories that slowly unravel by the time it is the concluding act. Most of the supporting roles feel one-dimensional, frequently charming, but utterly uninvolved. There isn't room given to the character's to become more unique and memorable for the viewer. Plot-wise, the majority of this series feels episodic with only a few episodes of small strings of note that bring together certain aspects. Most of the time there is a consistent feeling that this is one of those series where missing an episode doesn't necessarily detract much from enjoyment.

I suppose one of the overarching elements is a romantic one by nature. We are left pondering if Okami-san and the boy who has a crush on her will wind up together in the end. Spoiler alert: this is left unresolved on one-hand, and open-ended on the other. This series certainly ended abruptly, and it doesn't give one a satisfactory conclusion. It ends up feeling like a collection containing short and mildly amusing pieces of a puzzle with a few missing parts in the run. I couldn't possibly give a full recommendation to a series so unfocused, but I still think that a reasonable time can be had with this show and it is worth a rental at the minimum for many anime fans.

Nothing about the show clicks perfectly... nothing about it manages to, in that twelve episode run, leave a feeling of satisfaction. Okami-San is a series that begins, runs its course, and then ends almost abruptly. It left me feeling baffled. I wouldn't want people to disregard this show, because I actually enjoyed it. At the same time it's not exactly something I want to give what could be considered a typical positive review. It needs to be clear by some degree that Okami-San isn't a series receiving a glowing recommendation by any stretch of the imagination. The series contains storytelling flaws in abundance (especially because this is a series lacking that necessary aura of ambition). It's your typical genre-infused anime.

With the show, you either take it or leave it. 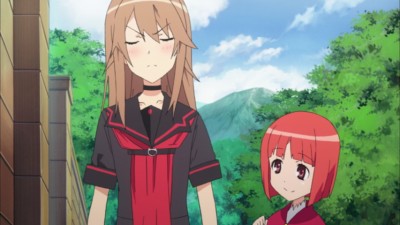 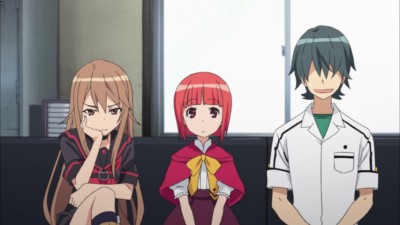 Okami-San and Her Seven Companions looks excellent on Blu-ray. As far as anime titles in High Definition go, this release is a real winner. Funimation has given the series a wonderful transfer that retains the entire beauty of the animation. Character designs are a bit indistinctive, but the overall artwork is clean, crisp, and pretty amazing to behold. The 1.78:1 framed transfer keeps the original television broadcast ratio and with this 1080p AVC encode fans are sure to be as pleased as can be expected for this high-quality outing. Note: The HD image is native on this release.

The audio presentation isn't going to knock your socks off in the same way the video does, but it doesn't disappoint. The clarity and crispness is there but the sound field doesn't use as much fun thunder to overwhelm the speakers. With both Dolby TrueHD versions, the included 5.1 English or 2.0 Japanese dubs are impressive enough technically and in terms of quality voice-acting. The series sounds a little less involved than some more action-oriented counterparts but is notable for having good clarity. English subtitles are provided.

Okami-San and Her Seven Companions doesn't boast much in the extras department. Perhaps the coolest bonus-feature isn't even actively promoted as such. This release comes packaged in Blu-ray sized art-box packaging with two separate Blu-ray cases enclosed (one housing the Blu-ray discs and the other containing the standard definition DVDs). I'm a fan of cool-packaging and this release certainly has that aspect of sales-worthiness. All on-disc extras are High Definition (pertaining to the Blu-ray discs only of course).

Episode commentaries have been provided on episode 1 and 6 - with some of the English dub "behind the scenes" participants.

Tokyo International Anime Fair (1080i, 2:47) is a brief subtitled introduction to the series for fans (only). The piece is so short and uninvolving that I don't see anyone finding this of any interest besides dedicated series fans.

Funimation has included clean opening/ending credit videos. In addition: promotional videos, original TV commercials, and a US trailer have been provided. Trailers for other Funimation releases are also included on-disc. 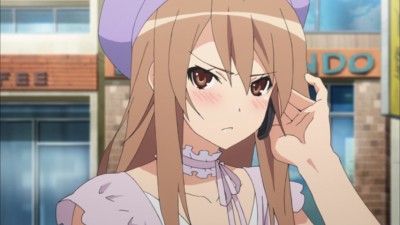 Okami-San and Her Seven Companions is a cute, lighthearted, and charming series. Too bad things don't seem to go much of anywhere. The characters are entertaining but lack depth in development. The plotline is barely existent. While I don't hesitate to recommend renting it, seeing the entire series may prove unsatisfactory to some degree. Only purchase if you have viewed the entire series and are a fan of collector packaging (this set is beautiful to behold).