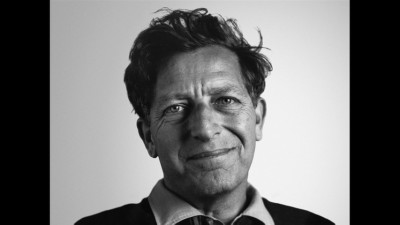 Whether you agree or disagree with the late, great Paul Goodman's cheerfully, rigorously radical ideas, it's clear that very, very few public figures -- really, of any ideological stripe -- since his 1960s-1970s prominence as author/speaker/television guest have attained nearly the richness of thought or the lively way of expressing it that Goodman had. In Paul Goodman Changed My Life, director Jonathan Lee takes us on a trip back that, far from being yet another of the mournful, vaguely defeatist elegies for the Sixties we've been getting since Reagan, is an optimistic (but mostly levelheaded) celebration of one person's articulation and defense of hopeful ideals that can actually inspire and mitigate despair, even when the kinds of things Goodman so knowledgeably, passionately concerned himself with -- the social, economic, and cultural conditions of the United States -- are as desperate as they've come to be. (And if you ever happen to be looking for examples of how, outside of the encouraging but media-neglected Occupy Wall Street movement, there isn't much of what could be called a true American Left in our two-party landscape these days, this film will do the trick and then some.)

Lee makes more elegant than average use of the tried-and-true documentary tapestry of present-day and archival interviews woven together with voice-overs accompanying slow zooms in on still photos, but then, he has a subject that is much more elegant (and eloquent) than average. Goodman was a man -- a prolific, accomplished anti-war activist, urban planner, Gestalt therapist, and prolific author of novels, plays, poems, and pamphlets -- admired by many; the surprising extent of how widely respected he was can be measured by the first thing Lee shows us, a mid-'60s Goodman appearance on WASP-Republican paragon William F. Buckley's Firing Line television interview show, in which Buckley himself (whose worldview would seem to have been precisely 180 degrees from Goodman's) praises him effusively in his introduction. From there, it's on to the clip from Annie Hall where Alvy Singer's New York-intellectual wife says, mingling and schmoozing at a party, "Isn't that Paul Goodman?" and a Goodman-lauding radio interview with Susan Sontag circa her Under the Sign of Saturn essay collection, which itself opens with an unequivocal appreciation of Goodman and his writings. (This is apt; Goodman's best-known book, the wonderful Growing Up Absurd, formed part of a quasi-canonical '60s-leftist triptych that also includes Sontag's Against Interpretation and Herbert Marcuse's One-Dimensional Man, though Goodman's is the most accessible and compulsively readable of the bunch.) Lee also includes famous footage of Goodman alongside poet/fellow ringleader and sexual revolutionary Allen Ginsberg and Black Power spokesman Stokely Carmichael, all having a stimulating, happily contentious argument over what equivalencies, if any, there are between oppression based on sexual orientation and that based on race -- in 1967! 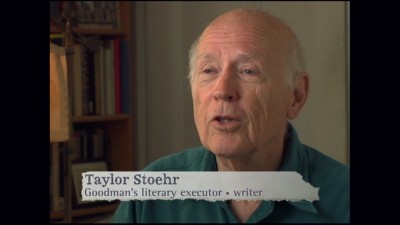 From those relatively familiar entry points, Lee goes deeper and wider, all the way back to Goodman's fatherless New York City childhood and Depression-era experiments in utopianism (he and his brother Percy, an architect, wrote a book on the subject called Communitas that has long served as a bible for communal living). His refusal to downplay his far-ahead-of-its-time, casually open, and very active bisexuality, along with his general mischievousness and mistrust of hierarchy and authority, kept him from landing a secure job in academia, though he often took short-term lectureships and teaching assignments. Instead, Goodman fought to pursue his vocation as a writing in a world that did not seem to want to publish or read him, moving in poor but elite intellectual circles and eventually coming to prominence as a vocal opponent and critic of U.S. society and foreign policy at a time (the Kennedy/Vietnam/civil rights era) when the nation was ready to listen to such reasonably self-critical talk, which until that point had been blasphemy that had gotten many (including, he believed, Goodman himself) blacklisted. 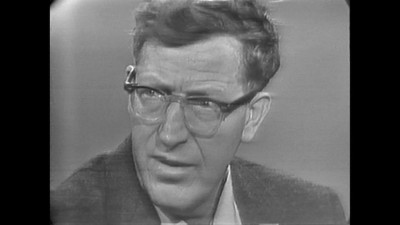 Goodman was no chameleon; part of what makes him stand out and has earned him so much veneration is his stubborn adherence to principle despite the mood of the times, which would get him into almost as much trouble with naive young lefties in the late '60s as it did with the conservative mainstream in the '40s and '50s. He led his life openly (even, if career concerns and self-preservation come into play, recklessly) as a rabble-rousing, flirtatious polyamorist who saw no contradiction in being out most afternoons cruising for young men and always being home with his family at dinnertime, there to tuck his children in, and he paid the price for living a life that threatened so many imposed and dominant ideas of normality. But the effects of Goodman's insistence upon walking his talk when it came to his family, associates, and fans were not unmixed, of course, and through his interviews, Lee gives us as much as he can of the different Goodmans that various people in his life experienced: daughters Susan and Daisy, widow Susan (who recall both the mixed-bag father/husband Goodman and the loving, respectful, but contentious relationship he had with his late son, Mathew, who died in a hiking accident); acquaintances/acolytes like Living Theatre founder Judith Malina (whose celebrated avant-garde troupe produced some of Goodman's plays), poet Frieda Gardner, acclaimed author/activist Grace Paley, and novelist Edmund White (who reads one of several Goodman poems included in the film for our listening pleasure); literary executor Taylor Stoehr; and a handful of former students. The picture of Goodman that emerges is stark, touching, sometimes aggravating; many of the frank comments about the strains on those around him that were inflicted by Goodman's stubborn insistence on actually practicing his ideals of sexual freedom and socialist anarchy (in particular his children and, for especially obvious reasons, his wife, whom he held to a double standard that, gender-role and fidelity wise, can only be described as sexist) indicate that one can be principled and honorable at the same time one is absolutely, imperfectly human. The people in Goodman's life, like the film itself, find a way to celebrate him and his legacy without ignoring his flaws or his ability to neglect or hurt those close to him, and the resulting attitude toward the anti-patriarchal patriarch is a mixture of abiding love with grudges large and small that will be familiar to most of us who came from much squarer families than Goodman's. 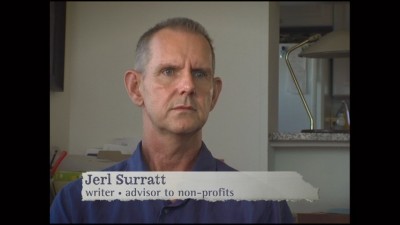 The film does have its moments of blind hero-worship, which are its dullest stretches; these are rare and come mostly in the form of rationalizations offered by people like Judith Malina, who were friends of Goodman's and don't want to dwell on his less admirable qualities and behaviors. (And on the filmmaking front, the score by Miriam Cutler struck me as fairly anodyne; more negatively, I was reminded once again of the lesson branded into me by Rob Epstein and Jeffrey Friedman's Howl: when poems are read in voiceover as part of a film's content, a blank screen would usually be preferable to misguided interpretive images provided by the well-meaning filmmaker.) Paradoxically, though, it's writer Jerl Surratt, who resembles the filmmaker and the audience most closely by dint of never having met or known Goodman, whose impassioned, utterly partisan adoration of the man gives the film its most moving material. Surratt, now middle-aged, recounts being somehow found and rescued by Goodman's works as a gay, artistically-inclined youth in a small, conservative Texas town, and drawing enough hope and motivation from them to decide he wanted to go away from where he was and toward wherever it was these scintillating, brilliant writings were coming from. It is Surratt's experience, his quote about having his life changed that gives the film its bold but meaningful title. What he is doing by expressing unreserved admiration with such clear, real, conviction based on deeply felt experience is analogous to what Lee has done by making Paul Goodman Changed My Life, and for anyone who has had the same freeing experience at the benevolent hands of a writer, a musician, a filmmaker, or anyone else whom one has never met but who has set a liberating example and injected hope, energy, passion, and new, exciting ideas into one's existence, the gratitude Surratt and Lee feel towards Goodman, their need to spread the word with missionary-like zeal, will resonate deeply. 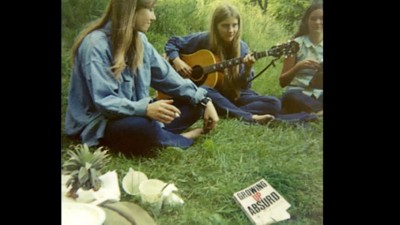 
The transfer of the film -- at its original 1.33:1 aspect ratio -- is perfectly faithful to the mostly video, occasionally 16 mm footage Lee has used, combining both archival materials and new interview footage. No compression artifacts -- aliasing, edge enhancement, etc. -- are present in any noticeable way.


The disc's Dolby Digital 2.0 soundtrack is fine, perfectly capturing the film's standard-issue documentary sound design (nothing fancy, but pleasingly clear and full) with no distortions, hiss, or imbalances whatsoever.


--Four deleted scenes, all further interviews, in which former Goodman student Nicholas von Hoffman relates an amusing anecdote illustrating Goodman's good-natured lecherousness; Dissent editor Michael Walzer describes rereading Growing Up Absurd in the present; Geoffrey Gardner on Goodman's contrarian ability to alienate even those who completely agreed with him; and Students for a Democratic Society cofounder Richard Flacks ruefully recalling the sad, Goodman-prophesied dissolution of the New Left from commitment, diligence, and active pragmatism to delusion, self-indulgence, and finally dissolution as the Sixties wore on. These clips must have been cut for length; if you enjoyed the film, they only further that enjoyment, and could justifiably have been kept in.

--An interview with director Jonathan Lee in which he recounts his long-running Goodman fandon after an initial Damascan-road encounter with his work in 1970, as well as the atypically long gestation of the film from his vaguely wanting to do something in tribute to Goodman to his actually becoming a filmmaker (an ambition he had never had before) just for that purpose.

--Additional excerpts of Living Theatre founder Judith Malina reading from her diaries (an extension of the same material interspersed throughout the film; again, it must have been cut down for length).

--Full-length versions of the readings from Goodman's poems used in excerpted form throughout the film.

--An insert with a director's statement from Lee, in which he reiterates in more succinct written form much of what he has described of his experience with the project in his onscreen interview.


A beautifully detailed, multifaceted, only rarely sycophantic scrapbook dedicated to the great, confounding public intellectual of its title, Paul Goodman Changed My Life makes for either an excellent introduction or, if you're already familiar with Goodman's work, a heartening reminder of not just the writer/activist as exemplary individual but of a type of figure that is virtually extinct; these days, we have very few public spokespersons as simultaneously knowledgeable, intellectually disciplined, and politically radical as Goodman. But it's not just the content of Goodman (his political and personal progressivism) but the very form of persona he represented -- openly, forthrightly learned and well-spoken on a vast array of relevant social, cultural, and political topics, and bluntly disdainful of ignorance -- that seems to have fallen out of favor in a public arena that, the galvanizing footage of Goodman's public appearances in the film can't help reminding us, is louder and more unabashedly dumbed-down than ever. In recounting Goodman's life and work through a scrupulously diverse range of viewpoints, director Jonathan Lee does justice to his memory by (usually) refusing to either put him on a pedestal or condemn him for his contradictions or the disorder his high-minded ideals sometimes wrought, fairly or not, in his own personal life. The film is an inspiring act of cultural paying it forward that Goodman himself would surely have found apt: it's meant to express the gratitude of those whose ideas and ways of thinking were challenged and changed (either directly or just as a reader) under Goodman's rigorous but ebullient tutelage by extending the knowledge and appreciation of his work out to those who may have forgotten (or, worse, never even known) that there could be such a genuinely intelligent and conscientious figure capable of drawing celebrity-level public attention. Recommended.