It was only a matter of time before Hollywood or those outside of Hollywood and for that matter, the United States, set their sights on French President Nicolas Sarkozy and his meteoric rise as the most recent and current President of France. The Conquest or as it's aptly titled La Conquête in French is literally everything that title implies and more.

Nicolas Sarkozy (Denis Podalydes) is on his way to accepting the Presidency of France, but his wife Cecilia (Florence Pernel) is nowhere in sight and his insecurities begin to creep in. It's been a hectic five years leading up to this moment and his significant other is about to leave him hanging at his own inauguration.

Such is the life of the most powerful man in all of France. The previous five years were filled with nothing, but backstabbing, gossip, treachery, etc., but it was all in the name of reaching that ultimate goal of being France's President. That old saying of "by any means necessary" came natural to Sarkozy. Denis Podalydes is a bloody doppelganger as Sarkozy it's almost frightening. Actually, it's a bit of a trifecta in the looks departments. The actors that portray Sarkozy, Chirac, and de Villepin look like identical twins to the real figureheads it's almost scary!

The Conquest does a great job in capturing all of (or most of) Sarkozy's ticks and various insecurities along with accentuating his strengths in media manipulation, oration, and that he is a downright charming individual when he wants to be. On that same token some of his quirks include insecurity with regards to his height (he's 5"5), he rarely ever smiles, is extremely vain, and acts like a dictator when he wants to get things done. There's a terrific scene where he walks into a studio and has no idea what he's supposed to say in front of the camera, because he has no script. He proceeds to cuss everyone out, but as soon as "action" is yelled, he turns on the charm and positively flows. It's like flipping the light switch.

I remember watching the trailer and being interested in the subject matter, but the film never opened near me, so what better way to experience the film than on DVD (and hopefully an upcoming Blu-ray). The Conquest never shies away in trying to depict the little guy, his idiosyncratic behavior, and his ultimate rise to power, but it also never runs into mudslinging territory - it's not a film that attacks him at every turn. It's a very balanced film that focuses on a specific time frame that just happens to include several other players, as well. I think that the filmmakers did a great job in cramming so much information in under two hours, but do wish that it were even longer, maybe an extra half hour. Oh well. 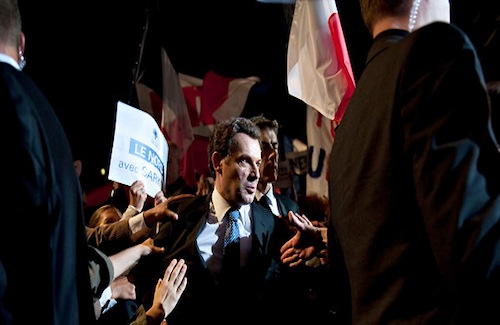 The Conquest is presented in 2.35:1 anamorphic widescreen. This DVD features pristine video with very little in the way of source errors. Flesh tones are extremely vivid and realistic and considering Denis Podalydes wears some prosthetic make-up appliances, one would never guess, as the edges don't show up on the video at all. This is a testament to the strength of the transfer and the make-up artist. Black levels are extremely strong and never crush. This is especially evident during Sarkozy's many speeches given in darkened auditoriums. Contrast levels also serve to compliment black levels as they never boost or flare. The Conquest has certainly "conquered" this DVD, no doubt. 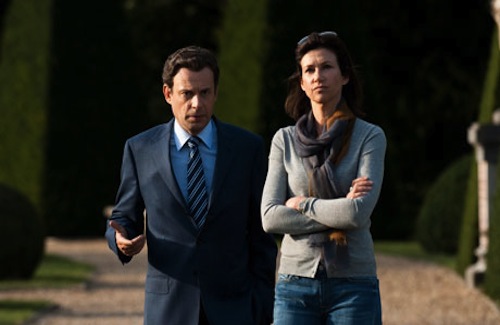 The Conquest is presented in French Dolby Digital 5.1 with English subtitles. This may not be one of them action-packed affairs, but it doesn't stop it from being very dynamic. Dialogue is ultra clean and clear, with the French dialogue coming through the center channel with exceptional clarity. I had zero trouble keeping up with the dialogue. Instances of camera flash during the bigger set-ups (paparazzi and whatnot) would kick in through the rear speakers; there were times where I had to turn down the autograph seekers myself. It's a very immersive soundtrack for a standard DVD. I was very impressed. 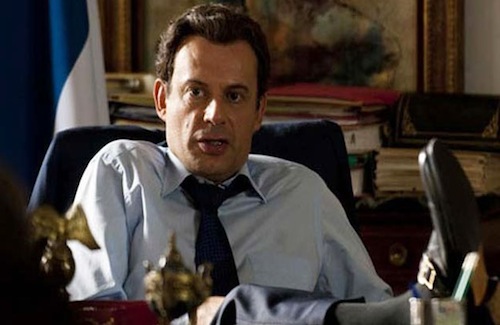 The Conquest has a pretty cool making-of documentary that sheds lots of light on what went on during the film's production in addition to interviews with the majority of cast and crew. It's a pretty neat documentary, but I do wish that the DVD as packed with even more material. The only other special feature we get is a teaser and theatrical trailer of the film. 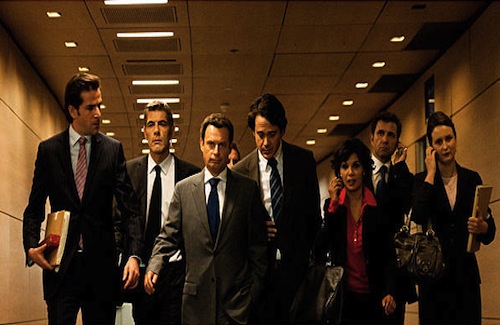 The Conquest was an interesting little look at the most recent years of Nicolas Sarkozy's life and sharp rise to power and presidency. It's not a traditional biography pic as it only offers glimpses of what went on most recently. I'm sure if we had an extra hour or so then some of those moments of his past could have had some light shed on them. As a quick bite of entertainment, The Conquest offers more than enough for one to sink their teeth into and feel satisfied. Me, I wished for it to go on a little bit longer, because the world carved out in this film was extremely fascinating.