Other // Unrated // January 1, 2012 // Region 0
List Price: $29.95 [Buy now and save at Imdickenshesfenster]
Review by Stuart Galbraith IV | posted January 27, 2012 | E-mail the Author
It's fascinating when you think about it: I'm Dickens ... He's Fenster was a failed sitcom from the 1962-63 season. It was pretty funny and its admirers included no less an authority on such things than the great Stan Laurel. But it couldn't find a big enough audience and so it was cancelled after just one season, its 32-episode run deemed too short to warrant putting it into syndication. Between the fall of 1963 and late 2011, I'm Dickens ... He's Fenster was one of those impossible-to-see shows known only to a handful of aging admirers and TV historians.

But now, after nearly 50 years of languishing in almost total obscurity, I'm Dickens ... He's Fenster gets another shot thanks to that miracle of miracles called DVD. It's impossible to say where this renewed interest came from. Maybe nostalgic 60-something-year-olds longing to see it again, or perhaps the show's creator, Leonard Stern, and stars John Astin and Marty Ingels had a hand in the I'm Dickens ... He's Fenster campaign. Regardless, there's been talk of a super-deluxe-o DVD for about the last five years, during which time even many that had never heard of it before gradually became keenly interested in its revival.

And now it's here. A joint production of TV Time Machine Productions, Lightyear Entertainment, and Heyday Productions, I'm Dickens ... He's Fenster - Volume One is an extremely well produced DVD set of a series ripe for rediscovery. It's not on the top-tier level of, say, the contemporaneous The Dick Van Dyke Show, but it has some of the same appeal and it's a heck of a lot funnier than many longer-running sitcoms from the period, shows that became syndication perennials, like I Dream of Jeannie, Bewitched, or The Beverly Hillbillies. 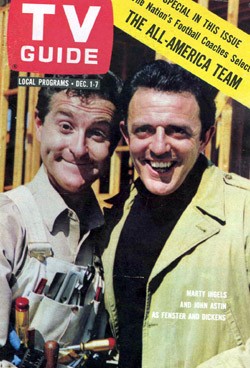 Leonard Stern was a comedy writer under contract to Universal early in his career, where he worked on several lesser Abbott & Costello and Ma & Pa Kettle movies before hitting his stride on television, notably writing for Sgt. Bilko and The Honeymooners. With Sydney Zelinka, Stern wrote some of the funniest half-hours in the history of television, including such classic Honeymooners as "The $99,000 Answer" and "A Dog's Life," and "Doberman's Sister" for Bilko. In 1961 Stern was having his house remodeled, and carpenters accidentally sealed their own ladder inside the Stern's brick fireplace and lo - a show was born. Stern incorporated this incident into I'm Dickens ... He's Fenster's pilot.

I'm Dickens ... He's Fenster was slightly unusual in several ways. There was a greater emphasis on physical gags when, this being the early '60s, few others were doing this kind of thing. Lucille Ball was an obvious exception, but her slapstick tended to play like set pieces, star turns, whereas the physical humor in I'm Dickens ... He's Fenster evolves more naturally out of the situations.

It's no surprise Stan Laurel was a fan. The series is reminiscent of several of Laurel & Hardy's comedies, particularly their classic two-reeler Busy Bodies (1933), in which Stan and Ollie play carpenters at a sawmill. Dickens and Fenster aren't child-like in the Laurel and Hardy sense, however, and partly what makes I'm Dickens ... He's Fenster so intriguing is that these guys are everyday, working-class people. Astin's Dickens, usually on the receiving end of the physical gags, is appealingly ordinary, while Ingels's Fenster, with his rubbery face and alphabetized coveralls (a very Laurel-esque bit of humor) is more the conventional clown, but still mortal and essentially adult.

Adding to the show's effectiveness is that it was a three-camera sitcom performed in front of a studio audience, like The Honeymooners, The Dick Van Dyke Show, and The Lucy Show, the latter debuting the same season as I'm Dickens ... He's Fenster. Within a few years, almost every sitcom shifted away from that style to single-camera shows with canned laughter, the production method used on programs like Gilligan's Island, The Addams Family (with John Astin), Stern's later Get Smart! and innumerable other series. Shooting I'm Dickens ... He's Fenster in front of a live audience was something of a risk. Slapstick requires precise timing and a sense of spontaneity, plus the actors ran the increased risk of injuring themselves, which is exactly what happened to Astin on several occasions. That many of these physical gags come off well live on film, with an audience, is an achievement.

I'm Dickens ... He's Fenster - Volume One is a handsomely packaged set containing the show's first 16 half-hour episodes, presented on three single-sided, dual-layered discs. The box art is attractive and in full color, as is the foldout insert offering a detailed episode guide and cast biographies. The black-and-white shows are in decent shape, not pristine but generally very good, and given good transfers. The discs are region-free and the mono audio (English only, no subtitles) is likewise strong.

My one complaint about this collection is the curious decision to segregate all the extra features from the episodes. The 19 shows are on the first two discs, while all of the supplements are crammed onto disc three, including seven audio commentary tracks (a first, I think, putting commentaries on a separate disc), and episode-specific video featurettes, all in 16:9 enhanced widescreen. Included are two general featurettes, I'm Dickens ... He's Fenster Get Physical and Tribute to 'I'm Dickens ... He's Fenster' Creator/Producer Leonard Stern. Sadly, Stern passed away last June, before this was released, obviously, but he was actively involved in its creation, appearing on-camera and on one of the commentary tracks. Also on-camera is the amazingly ageless John Astin, sans toupee here, and Marty Ingels. Director Arthur Hiller, series regular Dave Ketchum, guest stars Yvonne Craig, Lee Meriwether, and Chris Korman, son of actor Harvey Korman, along with Stern, Astin, and Ingels, appear on various commentary tracks, of which there are three for the pilot alone.

I'm Dickens ... He's Fenster - Volume One is a rare treat for fans of classic television comedy, and physical comedy generally. I can't imagine something this outré selling like gangbusters, but it deserves to. Now if only someone will get around to releasing Colonel Flack... Highly Recommended.


Film historian Stuart Galbraith IV's is still waiting to get paid for the work he did months ago on Media Blasters Godzilla vs. Megalon. Where's my check, Carl?