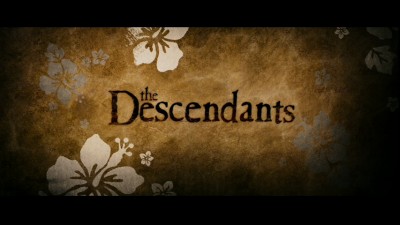 The Descendants is a tale about families, the necessity of love, and the determination to be capable of moving forward. It's a story about hope, courage, and the reasons why we must remember ourselves. Matt King (George Clooney) is a land owner in Hawaii. He owns some of the most treasured and sacred land in the entire state. In a way... not a single aspect of that matters. Matt is about to lose his wife and he has no idea how to accept that she has been faced with the paralyzing possibility of death. Matt barely even knows how to stay connected to his daughters Alexandra (Shailene Woodley) and Scottie (Amara Miller). Remembrance. Matt must never forget what matters more than anything else in this legendary world we all live in: Love.

Amongst my favorite storytelling concepts is the idea of telling a tale about the family unit. Family can mean a variety of things to a number of people. For some it is the people birth related. For others it means the people closest to us... you know them so well and care so much for them that it's as if you were family even before you met. These areas are often overlapped. There are no stories that work better than stories about family units because one of the most relatable things on the planet is how we are all people connected through our family unity. Where would any of us be without the love of our family members? Our mothers, fathers, sisters, brothers, sons, and daughters... the list continues to go on and never does it stop, not even for a solitary second to catch a breath. Love is limitless and life-affirming.

The basic plot for The Descendants revolves about Matt trying to come to terms with an understandably frightening possibility of losing his wife. She had been injured in a boat accident and winds up in a comatose state. His oldest daughter, Alexandra, has some shocking news for him. Elizabeth (aka Mom) had been having an affair.

Naturally, Matt doesn't respond too well to this news. He must come to terms with understanding what happened, and he must recognize his role as father to his two daughters. Lastly... what will happen to all that Hawaiian land he owns? Should he remember to sell it? Matt begins to wonder if that is what he even wants. After all, absolutely none of the land would be his if he wasn't one of the descendants of it. Understanding. Matt must remember what it means to be a descendant. To have descendants.

The filmmaking is exquisite in front of and behind the camera. Each aspect works. Alexander Payne is one of the most wonderful filmmakers on the entire planet. He understands and remembers what is needed in order to tell a good story. To share something meaningful with others that won't soon be forgotten. I have never seen something by Payne as director that wasn't somehow profound and inspiring to me. Amazingly, The Descendants tops everything else he has crafted to date and seems destined to be one of his greatest accomplishments. To date it is his very best effort. 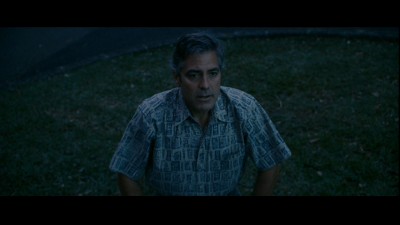 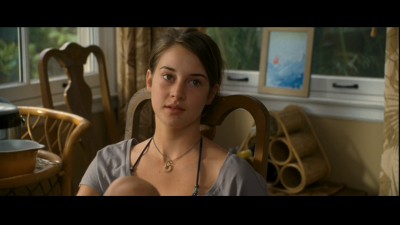 George Clooney wasn't winner of an Academy Award for Best Actor but he deserved his nomination. Every moment with George Clooney feels like a miracle of filmmaking. This includes seeing the expression on his character's face when he hears about his wife, and how he responds to all of it. It also includes his growth and development in the film as a father to his daughters. Everything in the subtleties of body language and wisely spoken words (or unwisely spoken) adds to this performance as one of the finest he's ever given.

Shailene Woodley gave a breakthrough performance as his compassionate daughter who struggles with accepting her mother's illness and the state of her father's mind. She helps ground the film with her performance. There is a genius moment in the film where she has just heard the news of her mother's condition and she swims underwater, crying, and then resurfacing. It's a moment that lasts only a few minutes at most but it is heartbreaking and authentic. You connect to her character and with that connection comes real understanding.

There are so many supporting performances that are also worth noting. Amara Miller is the most under spoken performer as the young daughter but she definitely manages to deliver an incredibly solid performance. Imagine being that young and having to stand up against someone as amazing as Clooney. She manages it, anyway.

Nick Krause is perfect as the goofball Sid. Half the things that come out of Sid's mouth are mind-numbingly stupid, ridiculous, and unbelievable. But he's such a sweetheart and caring guy (even when he's being an idiot) that the character (and actor) is often capable of being a scene stealer in The Descendants.

The Descendants just works beautifully. The script, the cinematography, the real Hawaiian music, the performances, the editing, the costumes... and just about everything else. This film explores themes that most filmmakers shy away from. Payne has crafted one of the greatest films of the year. I am certain that it will stay with me for a long, long time. Be prepared for powerful filmmaking. 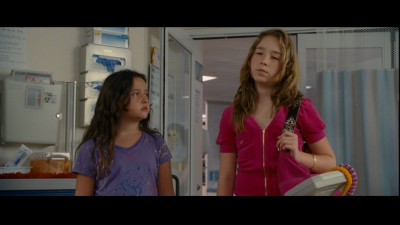 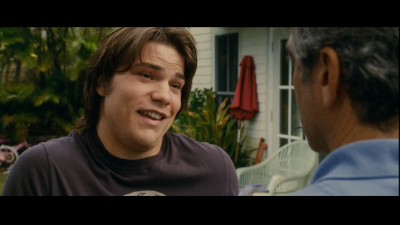 Please Note: The images used in this review are from the DVD in this Combo Pack release.

The Descendants arrives on Blu-ray with a faithful AVC encode featuring an average of 22 MBPS on a 50 GB Dual Layer disc.  It has been presented in the theatrical aspect ratio of 2.40:1. I wasn't sure what to expect from the quality of this transfer (in part because of how the other Alexander Payne films look on the format. Most of them are good but not exactly stellar transfers - certainly not demo worthy material). The Descendants is the breakthrough on that front. The film is richly photographed with some amazing visuals, showcasing Hawaii in all of its beauty. The first rate encoding and presentation make it seem so stunning location-wise that it's hard to imagine Hawaii as anything other than paradise (despite the situational aspects of the film that suggest otherwise). You'll be amazed by the cinematography, lush Hawaiian locations, rich color, and clean design.

The primary audio track included on this release is English DTS-HD Master Audio. It is an exemplary audio track that emphasizes the quietest moments; the background audio has deftly interwoven into the experience, and enhanced the mood the film creates. This was not a "loud" movie, but it is one with the knowledge and grace to use the surround sound channels as a way to create an authentic atmosphere. The authentic Hawaiian music was essential to this film and it sounds beautiful with lossless audio. Spanish, French, and English Descriptive audio options are also included in 5.1 Dolby Digital. Subtitles are provided in Spanish and English SDH.

This is a Blu-ray/DVD/Digital Copy combo pack release.

Tons of bonus materials have been included on this release. All of these extras have been presented in 1080p High Definition. However, the print quality on the silent film seems to have been taken from a weak source and is not up to the usual high standards. Keep that aspect in note. The newly-recorded footage for the behind-the-scenes material is stunning.

Everybody Loves George (7:27) has the cast and crew talking about the massive celebrity and A-Class actor George Clooney and what he was like to work with (or have fun with) in filming The Descendants. By the way, by massive I meant popular - not overweight. Yep.

Working With Alexander (13:34) is the coolest and most fun inclusion on this release if you're a huge follower of Alexander Payne's filmmaking.  Here we get to see him as he makes an omelette and discusses his craft a bit. We also get good interviews from this production's cast and crew about the director.

The Real Descendants (12:06) will help you to find out who owns tons of Hawaiian land... seriously (not in a storytelling sort-of-way).

Hawaiian Style (16:47) focuses on several aspects of the behind the scenes production beginning with the introductory blessing given to the filmmakers.

Casting (8:11) is a piece about (you guessed it!): casting. Alexander Payne discusses.

Working with Water (10:58) has the cast and crew discuss what it was like to work with acclaimed actor water. I wonder how many of them seriously thought that water was difficult... drip, drip, drip? 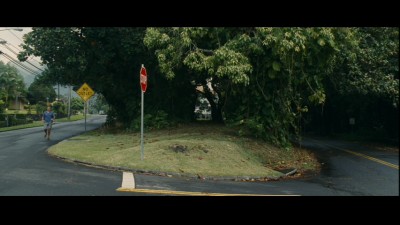 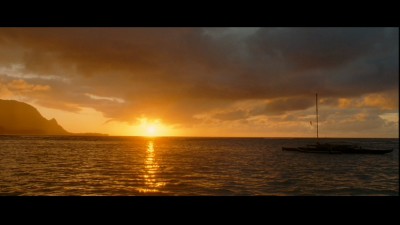 Music Videos: Will I Ever See You Again, Postcards from Paradise, Honolulu's Whisper

These music videos have been set entirely to footage of Hawaii as photographed for the film but without using any clips from The Descendants. This is essentially coverage footage that ended up being used to highlight the music in a relaxing way.

Waiting for the Light (2:52) is a brief behind the scenes piece. I'm going to avoid making jokes about this one, alright?

The World Parade - Hawaii (9:55) is a silent short film with footage of Hawaii. It's worth checking out for fans of silent filmmaking who are also interested in Hawaiian footage.

A Conversation with George Clooney and Alexander Payne (11:58) is self-explanatory.

Deleted Scenes (5:46) focuses in on two short scenes edited out of the final cut. 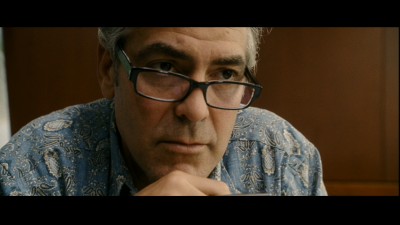 The Descendants was one of the best movies of 2011. George Clooney may not have won the Oscar for Best Actor but he still delivered one of the finest performances of the entire year. The Blu-ray release contains amazing PQ/AQ and a huge assortment of extras.

Buy this. Seriously. I'm not kiddin' around.