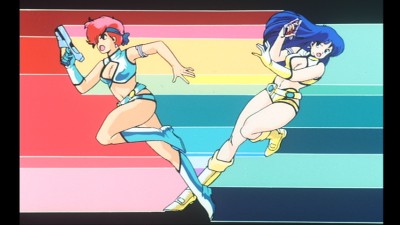 The Dirty Pair anime began production as a television series before it branched out into film and OVA specials. The main characters are commonly known as the "Dirty Pair" (despite the fact that they go by the team name "Lovely Angels", because of the fact they are known to many primarily as the crime-fighting space team that creates the most problems for everyone else. Naturally, the Lovely Angels (also known as Kei and Yuri) are the best at what they do and excellent at their goal of fighting baddies and saving the galaxy from intergalactic problems.

The Dirty Pair films collection is an altogether different experience than watching the television series or OVA episodes. The creative team isn't entirely the same in this case and it is an aspect that definitely shows with these special productions. Unfortunately, I mean to say that the films included on this set are of a much more variable quality than what many fans will expect, hope, or actually find. None of the films included on this collection come even close to being on par with the previous outings of Dirty Pair lore and there are a number of problems with each film produced.

What is most surprising about a quality variable between each film produced is the fact that the disappointing aspects of each film are actually different for each production. None of the films are perfect and some fans (including me) will find the quality to be disappointing. The worthy storytelling, characterizations, and goofy humor have largely become replaced by more action sequences, weaker storytelling, and unrecognizable characters. What happened to the quality? The quality of the filmmaking went out the window.  Not literally, of course. But you get the idea. 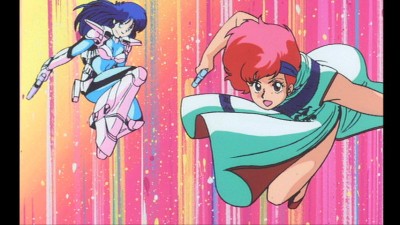 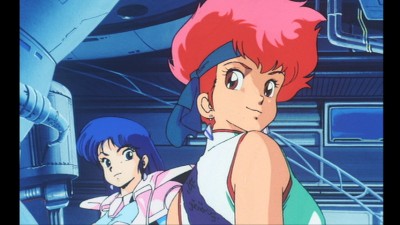 The set begins with the theatrical feature Project Eden, which is quite unlike anything else I previously encountered in the Dirty Pair anime. This was the worst film in the collection as almost nothing about it revolves around actual storytelling or character moments. It was an entirely disappointing film. It's messy, incoherent, and not the Dirty Pair saga that fans are expecting.  It contained the most incomprehensible plotline.

There's a mad scientist who is determined to create the perfect being by combining human DNA with alien DNA (of which an amazing amount of information exists for an almost extinct race). It's ridiculous how bad the script is at times. The mad scientist rambles on incessantly and the Lovely Angels are meanwhile joining forces with a mysterious and bulky hunk of a man who assists them in stopping the scientist from bringing a new super-evil-species to life. The film doesn't manage to have convincing plot threads. Instead, these elements are interwoven and rather unsuccessfully as things quickly become confusing and irritating.

The worst thing about Project Eden is that Kei and Yuri are nothing at all like they are in any previous Dirty Pair outings created. The characters seem to be portrayed more as stupid and helpless people and this marks a horrible rendition of these normally intelligent, badass, and talented characters that you can't help but love. Instead, the writers have basically decided it would be better to have them be side-characters in their own theatrical movie and to dumb it down.

Another element of Project Eden worth complaining about is the fact that the story goes at a snail's pace and the film eventually winds up in a place where it acts more like a long music video and not like a film at all.  Entire scenes are basically just shots of the characters in the slow-motion mode while annoying pop music is littered around the already weak material. I couldn't stand how bad the filmmaking was and the eventual conclusion just didn't seem too special. 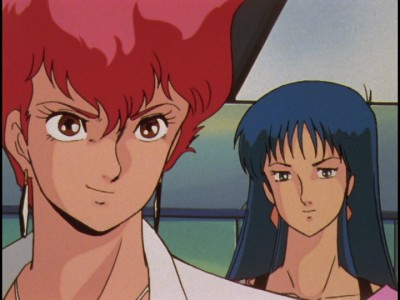 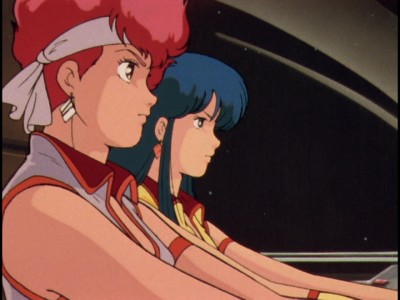 The second film included on this set is Affair of Nolandia, and it doesn't fare much better. It features another weak screenplay. The story is once again simplistic and uninvolving. A girl disappeared and it's up to Kei and Yuri to find her and bring her back to her family. But as things turn out, they discover that there's more to the missing girl than they imagined. The missing girl has superpowers that can affect the dream state and reality of others. This has actually led to disaster. Now the real mission for Kei and Yuri is to figure out who the girl actually is and why such bizarre events are happening.

The film's animation is notable for being radically different from previous incarnations of character designs utilized for the Dirty Pair anime. Both Kei and Yuri were given redone character designs (or should we say alternative designs?) that are meant to be a tad more realistic. It certainly is different, but I'm not sure it was better for it in this instance. The previously used designs are far superior and are better at representing the anime's spirit.

The ending was the best part of all three of the films included in these sets. It was pretty simplistic but it worked better regardless. The last fifteen minutes are intense in delivery; bringing a decent conclusion. The action is also decently done. The story was still simple, generally just average, and uninvolving.

The final film included on this set was Flight 005 Conspiracy. In this feature, Kei and Yuri become faced with the possibility that a space transportation carrier was exploded with the passengers on board and for some diabolical reason that they needed to solve. The plot has interesting developments, the animation is more in line with the OVA's, and the characters actually seem to be themselves in this special. It was the one film in the entire set that was enjoyable enough as an actual adventure with the Lovely Angels. It was somewhat intense, suspenseful, and intriguing from beginning to end. The conclusion was a bit of a downer in surprising ways, but the film itself was well-crafted: imperfect but entertaining nonetheless. 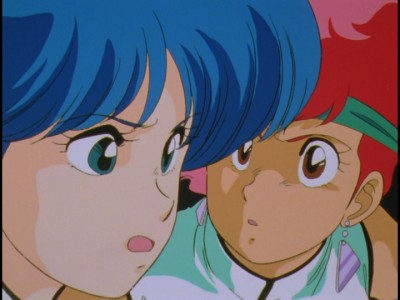 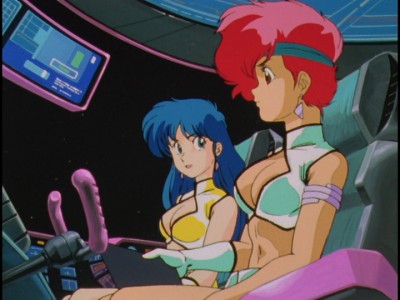 Dirty Pair Features is a set re-releasing the films with newly remastered video from the Japanese DVDs. Project Eden is the only film in the anamorphic widescreen 16:9 aspect ratio because the film was the only theatrical production. The colors look slightly duller but the print is largely the cleanest of all three films and the contrast and level of detail is impressive. Affair of Nolandia and Flight 005 Conspiracy are both presented in full frame because they were OVA specials.

Affair of Nolandia retained film grain; a pleasant surprise, but the film also has many moments of specks of dirt that prevented it from being as good as it could have been visually. Flight 005 Conspiracy was the cleanest transfer overall and was virtually devoid of print damage. It had a good level of detail and colors were vivid without appearing boosted. This was the nicest of all three films in the transfer department.

The audio is consistent between each film. This release contains three options: Original Japanese with English subtitles, an English dub from Streamline Pictures, and an English dub from ADV Films. None of the films contain a 5.1 surround sound mix. This is fine for the Japanese audio and Streamline dubs but I would have expected the newer ADV dubs to be done in that style. Regardless, the sound would probably have been difficult to improve much.

These are quiet audio tracks with less activity than newer anime productions. The dialogue is easy to understand and that is easy to appreciate though. Of the audio options, I enjoyed the original Japanese Language versions best but I would recommend the Streamline dubs for anyone who feels like watching these in English. The ADV dubbing isn't as impressive as Streamline's dubbing in regards to the quality of voice-acting.

Extras are minimal. Line Art Galleries and Trailers for other Nozomi Entertainment DVD sets were included with each of the films. 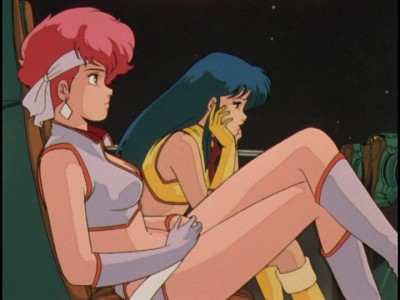 The Dirty Pair: Features collection is inconsistent as the films are not as well-made as I had actually been expecting to encounter as a fan of these characters and stories. The filmmaking seemed to be trying too hard to differentiate itself from the other incarnations in both Project Eden and Affair of Nolandia, but at least Flight 005 Conspiracy was close to the template of Dirty Pair that works so well.

Fans who have already seen and enjoyed all three movies are encouraged to purchase the set but fans of Dirty Pair in other incarnations who have yet to experience these feature films will want to rent them first. The films may come across as largely unnecessary and uninspired.