Please Note: The stills used here are taken from the opera's promotional materials, not the Blu-ray edition under review. 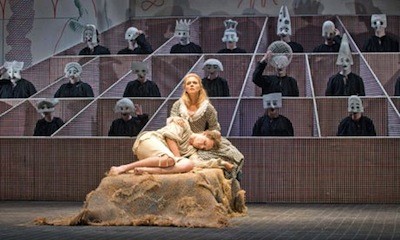 Every writer needs to step out of his or her comfort zone every once in a while. I've had plenty of opportunity to review opera on DVD and Blu-Ray in the past, but have always shied away from it. I know very little about the art form. It's not for a lack of interest. Sadly, finances and access have always been a big obstacle for enjoying many forms of art. Though the home video age has made it easier than ever to see performances of famous operas, as a music fan, I know that concert films never live up to the concerts themselves; this has made me take longer than I probably should have to get over myself and accept what was available to me.

In this case, I decided to take the plunge because this production of Igor Stravinsky's The Rake's Progress features something a little extra: stage designs by famed artist David Hockney. Originally staged in 1975 by the Glyndebourne Festival in Scotland, Hockney's take on this English-language opera has become a tradition at the gathering, and the 2010 performance recorded here is from its fifth run at the Festival. It was directed by John Cox and the music, performed by the London Philharmonic Orchestra, was conducted by Vladimir Jurowski.

Stravinsky drew his inspiration for The Rake's Progress from a series of etchings made by William Hogarth in 1735. He first staged his version in Venice in 1951, with a libretto by Chester Kallman and famed poet W.H. Auden. The story is of one Tom Rakewell (played here by Topi Lehtipuu), a young bachelor engaged to one Anne Trulove (Miah Persson). Tom is reluctant to settle down or get a job, and when it's revealed that a rich uncle left him a considerable sum of money, Tom gladly travels with his uncle's mysterious caretaker, Nick Shadow (Matthew Rose), to settle the estate. In London, he is met with all manner of temptations, betraying his commitment to Anne amongst the city's seedier elements, including marrying a bearded Turkish beauty named Baba (Elena Manistina). The consequences of his poor choices include financial ruin and, ultimately, getting committed to the madhouse, where he must confront all that he has done and lost...only to basically lose it again when clarity returns.

David Hockney's detailed sets are definitely a highlight of this production of The Rake's Progress. He draws on Hogarth's style to create abstract backdrops that almost look like storybook dioramas, as well as adding a touch of Edward Gorey (those hanging crocodiles! the hatching!). This effectively uses the built-in pretense of performance to emphasize the storyline's function as a kind of moral fable. There are also psychological motivations to some of his choices. London's pleasure palaces are colorful and ostentatious; the madhouse is stark and rendered in black-and-white (indeed, the third act begins in black-and-white, including make-up and clothes). The shinier aspects of the artifice are stripped away.

Musically, The Rake's Progress has some powerful swells as well as moments of real melancholy. For me, the most striking cast member was Miah Persson, whose turn as Anna provides the opera's emotional compass. She deserves the "Trulove" name, as she remains dedicated to her heart's desire. Elena Manistina is also fun as Baba, and Topi Lehtipuu does a decent job of holding it all together. As is often the case of stories of this kind, the lead is the least interesting character, as he has little will of his own, he exists just to serve the interests of other participants in the narrative. 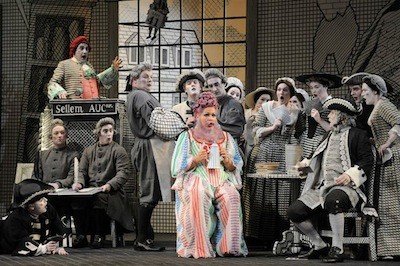 Video:
In terms of presentation, the Blu-Ray of The Rake's Progress is likely as close as you're going to get to the performance without getting on stage with the singers--and given the clarity of the image, you might sometimes feel as if you actually were part of the production. The 1080i widescreen transfer (16:9) is nicely rendered, with a strong attention to colors and a vivid level of detail. The costumes in particular look really nice, with evident textures giving us a tactile sense of the chosen fabric. Unfortunately, the high-definition works against the performers when it comes to their appearance. Their stage make-up is intended to play to the back of the room, not the guy standing next to them; close-ups on Blu-Ray shatter the illusion by making their skin look like clay.

Sound:
There are two options for listening to the soundtrack: a 2.0 LPCM mix and one in 5.1 DTS-HD Master Audio. Both sound very good, with great heft in the volume and a strong attention to detail and clarity.

Though the opera is in English, the English subtitle track can be helpful for catching all the words. There are also French, German, and Spanish options.

Extras:
Extras include a 24-page booklet full of notes on the production. On the disc, we are also treated to a cast gallery, a seven-and-a-half-minute "Introduction to The Rake's Progress" that fills the viewer in on the history of the opera and leading up to this production (Hockney is even interviewed), and the twelve-minute "Behind The Rake's Progress," which peels back the curtain to reveal how the show is put together.

FINAL THOUGHTS:
Recommended. The Rake's Progress is a well-made production of the 1951 Igor Stravinsky opera. Filmed in 2010, it captures a revival of a 35-year-old staging designed by famed British artist David Hockney. The opera itself is entertaining and serves as a decent introduction to the form for the uninitiated, with the Blu-Ray format providing the right kind of visual and aural pleasures to give curious viewers a taste for what live opera must really be like.