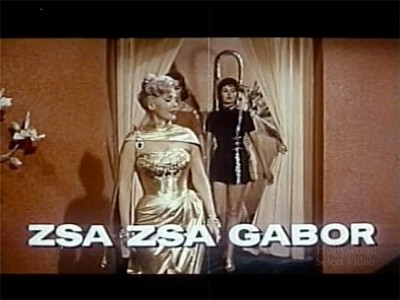 Tabloid queen of yesteryear and amongst the few still-kicking survivors of Hollywood's Golden Age, Zsa Zsa Gabor seems like an interesting enough personality to build a DVD tribute around. Despite memorable bits in colorful outings like Moulin Rouge and Lili, her acting career never amounted to much beyond small parts that played off her millionaire husband-hunting persona and uniquely accented voice. With Dahling: A Tribute to Zsa Zsa Gabor, Hollywood Select Video attempts to convey the Hungarian bombshell's appeal with a grab-bag of stuff she appeared in over the years.

As a kid, I always confused Zsa Zsa with her sister, Eva. Eva was the sensible, hard working Gabor who starred in Green Acres and voiced Bianca in the animated Rescuers films (not to mention the wig company that bore her name); Zsa Zsa was the Gabor who was frequently found plopped on Johnny Carson's couch, offering bon mots such as "As a woman, you have to choose between your fanny or your face. I chose my face." Sure, it was silly, but she always had a sharp sense of humor and had a canny way with enhancing her own ridiculousness. "Zsa Zsa" was a role in itself, and the woman played it to the hilt.

As Zsa Zsa became more renowned for her multiple spouses and taste for the finer things in life, what little acting assignments she did wound up being variants on her own public persona. This did nothing for her versatility as an actress, but she did that one thing well enough to keep her a familiar presence on TV in the '60s and '70s. Who could forget her as Erika Tiffany Smith, the socialite who crashed the island in a 1965 Gilligan's Island episode? (Okay, I completely forgot about that one before noticing it in her Internet Movie Database credits.)

The main point here is that there are quite enough notable Zsa Zsa vehicles, especially from her later TV-personality era, to fill a DVD in a manner classy enough to meet the lady's approval. Let's take a closer look at what we have on Dahling, dahlings: 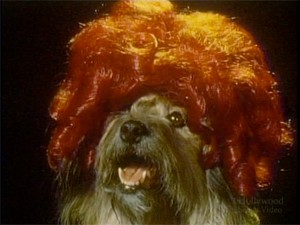 Zsa Zsa narrates this brief tale of a scrappy dog named Mooch and her attempts at becoming a canine star in Hollywood. As played by Higgins, the mutt who starred in the earliest Benji films, the pup goes through the motions of any aspiring starlet - walking Hollywood Boulevard, hanging around Grauman's, even visiting the L.A. Playboy Club. Before we get too enmeshed in the idea of Mooch debasing herself as a doggie stripper, she takes off with the first celeb she sees, Vincent Price. Mooch eventually gets taken to a wacky Bel Air vet's office to be impounded, but she escapes and has other adventures with James Darren, Jill St. John, and Jim Backus. As long as you don't mind the Hollywood Squares-wattage guest stars, this is an amusing little series of vignettes that amply showcases the seedier side of Hollywood. Nothing earth-shattering here, but the dog is cute and quite talented. All the more adorable is the fact that Higgins' stripper outfit actually gets an onscreen credit - it was designed by Frederick's Of Hollywood. How's that for kiddie-friendly entertainment? 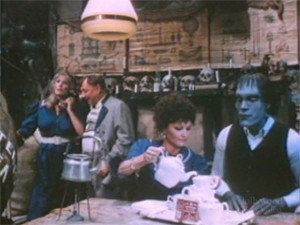 An incomprehensible, cheaply made horror-comedy, Frankenstein's Great Aunt Tillie posits what might have happened in Transylvania 100 years after Dr. Frankenstein created his monster. The doctor's descendents, including a doddering old guy (Donald Pleasance), a busty blonde (June Wilkinson) and the doctor's aunt Matilda (Yvonne Furneaux) stake a claim on the castle and revive the monster, still stowed away in the basement. The shoddily written script somehow involves the heirs' attempts to get money flowing back into the estate by reviving the monster, who is unaccountably painted a shade of blue. Zsa Zsa appears briefly in a flashback scene as the first wife of Dr. Frankenstein (also played by a slumming and obviously distracted Pleasance). How terrible is this? I kept thinking it would make an ideal Mystery Science Theater 3000 episode, but this turkey is too boring for even the MST3K guys to attempt to decipher. 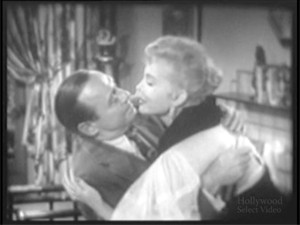 Ronald Reagan hosts this episode of TV's General Electric Theater which stars Jack Benny as Sheldon Weeks, a mild-mannered piano tuner who finds himself in the possession of a bag full of valuable stolen jewels. While he is tailed by Charles Bronson as the hood who originally stole the jewels, Benny's propensity to never tell a lie gets him further into trouble with his girlfriend. An odd little program which plays its laughs broadly - surprisingly, it was directed by Frank Tashlin (The Girl Can't Help It). Zsa Zsa appears as one of the three women who lustfully chase after the hapless Benny.

Dahling: A Tribute to Zsa Zsa Gabor's packaging lists another '50s TV appearance, an episode of The Milton Berle Show, among this disc's offerings. That isn't included, however. Original theatrical trailers for Zsa Zsa outings Moulin Rouge (1952), Queen of Outer Space (1958), The Naked Truth (1993) and We're Not Married! (1952) round out contents of this underwhelming tribute.

Spotty, mostly bad transfers on this full-frame disc. Mooch Goes To Hollywood sports a decent picture with a few flaws and scratches; Frankenstein's Great Aunt Tillie's de-saturated and somewhat blurry picture make it hard to watch. The Honest Man seems to be taken off a kinescope that somebody forgot to sharpen the focus on. All selections have the ever-present "Hollywood Select Video" bug in the corner.

It's all mono, and all strictly okay except for the muddy-sounding G.E. Theater episode.

Unless you count the four trailers, there are no extras.

As far as tributes go, Dahling: A Tribute to Zsa Zsa Gabor is like asking for diamonds and getting a cubic zirconia. The contents of this slim package appear to be whatever public domain stuff the folks at Hollywood Select Video could cobble together. Fans would be better advised to seek out her better talk show moments on YouTube. Skip It.