PBS // Unrated // February 21, 2012
List Price: $34.99 [Buy now and save at Amazon]
Review by Stuart Galbraith IV | posted March 5, 2012 | E-mail the Author
Clinton (2012), which aired on PBS stations only last month and is now already out on Blu-ray, is a generally good, four-hour retrospective of (and trip down memory lane with) our 42nd President. It's about on par with other American Experience profiles of U.S. Presidents. Written, directed, and co-produced by Barak Goodman, Clinton approaches its uber-divisive subject fairly for the most part, acknowledging William Jefferson Clinton's self-destructive, even tragic personal flaws while granting him his many gifts and accomplishments, some of which have been unjustly forgotten in the wake of the notorious Monica Lewinsky sex scandal.

PBS's Blu-ray is, however, less than stellar. For starters, the 1080i presentation is mediocre. While admittedly the bulk of the program sources pre-high-def archival video from the '80s and '90s, even the newly shot on-camera interviews and still photographs suffer from crippling aliasing. Overall it just doesn't look right, almost like standard-def upscaled for Blu-ray. Further, there are other annoyances, such as a very badly designed menu and chapter list that render finding specific scenes next to impossible. No extras. 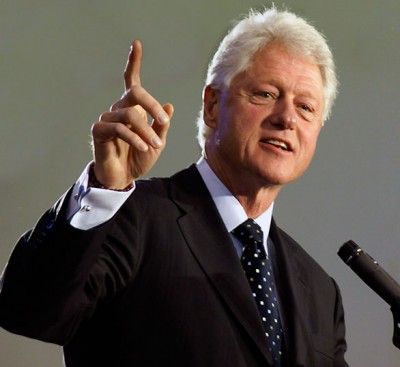 Clinton runs just under four hours but probably could have benefited with another 100 minutes added to the beginning and at least 20 minutes tacked onto the end. As it is, the show is concerned almost exclusively with Clinton's political career - it's not a biography - from his earliest days in Arkansas through the end of his two-term presidency. The show races through Clinton's pre-political personal history, and stops dead in its tracks the moment he leaves the White House for the last time, in January 2001.

The first hour is the weakest. It's so anxious to dig into Clinton's presidency, which it does very well, that it doesn't take time to really explore what Clinton offered in 1992 lacking in the other Democratic candidates. Early on the program establishes his great ability to intimately connect with voters on a deeply personal level (exemplified by an encounter with an older, distraught woman unable to afford her medical bills; Clinton treats her with such empathy it's like no one else is in the room). And yet it's this amazing ability to instantly intimately connect with other that proves his undoing: namely, his out of control womanizing. But in the first hour his critics' voices dominate: winning with just 43% of the vote (Ross Perot ran that year, as well as George H.W. Bush) it was an empty, "illegitimate" victory, that he couldn't be trusted, etc. But what exactly got him this far?

Once in office, however, Clinton's personality; his complex personal and professional relationship with wife Hillary; his policy aims; his relationship with the U.S. Congress; the rest of the world's attitude toward the Clinton Administration, etc. all come alive.

At times Clinton uncomfortably leans to the right, but that's symptomatic of the mix of on-camera participants: supporters like Dee Dee Meyers and Robert Reich are as brutally honest about Clinton's flaws as they are in praising his abilities and accomplishments, while critics, most notably Witch-Finder General Ken Starr, are purely negative and at times embarrassingly self-serving. ("A good lawyer is very thorough," Starr says, referring to himself.)

Clinton, ultimately, lets the facts speak for themselves. Faced with a huge budget deficit, he left office with a $240 billion surplus, much of it his doing, and despite Starr's $40 million investigation of the Clintons (one interviewee rightly says where normally investigations follow accusations, Starr's was an investigation in search of a crime) and even in spite of Clinton's eventual impeachment, his approval ratings remained high in his second term. The unending persecution of Clinton by Republicans during the impeachment process is made clear even without ever pointing to the most obvious hypocrisy, that his most vocal and sanctimonious accusers, namely Newt Gingrich, Henry Hyde, and Tom DeLay, were themselves carrying on extramarital affairs or would later engage in felony criminal activities.

As for Clinton, the program ultimately portrays him as a charismatic leader, somewhat tragic in that his own behavior thwarted his full potential while in office, but who nevertheless left the country in much better shape at the end of his two terms than when he first arrived.

Presented in 1.78:1 1080i, Clinton suffers from the aforementioned aliasing which is very pronounced. From more a production standpoint, the new interviews are inconsistently photographed, adding to the visual ugliness of some of it. Robert Reich, on one hand, is so soft as to appear almost out of focus, while Hillary Clinton biographer Gail Sheehy is lit and photographed in a most unflattering manner. The region A discs, two in this set, offer good 5.1 Surround and optional English subtitles, but the menu screen is confusing. The scene selection, for instance, is not numbered yet stacked in columns. Further clouded by vague or inapt chapter titles ("Final Years?" Is Clinton dead?) and it's almost indecipherable. No Extra Features.

A very good program that outweighs its weaknesses as a Blu-ray disc, Clinton is recent American history made alive. Highly Recommended.

Stuart Galbraith IV is a Kyoto-based film historian whose work includes The Emperor and the Wolf - The Lives and Films of Akira Kurosawa and Toshiro Mifune and special features for Tora-san . Visit Stuart's Cine Blogarama here.