Kino // Unrated // October 15, 2013
List Price: $29.95 [Buy now and save at Amazon]
Review by Stuart Galbraith IV | posted October 13, 2013 | E-mail the Author
Writer-director Curtis Harrington's Night Tide (filmed in 1961, but not widely released until 1963) isn't an easy film to adequately review. It defies genre classification: though sold as a horror film it's not quite that, nor is it exactly a fantasy or psychological thriller, though it contains elements of all three genres. It's mostly a dream-like romance, similar to producer Val Lewton's ‘40s horror films once-removed, with a screenplay that superficially plays like a protracted Twilight Zone episode while stylistically resembling a Conrad Hall-photographed Outer Limits. It was filmed on a tiny ($25,000) budget yet is impressively polished, with Harrington wisely limiting the story to a handful of characters while making superb use of interesting Pacific Coast locations all within blocks of one another. The good cast, including Dennis Hopper, Linda Lawson, Gavin Muir, and Luana Anders, along with composer David Raksin, seems to have recognized Harrington's arty ambitions. The actors all deliver interesting nuanced performances while Raksin's score is delicate and in tune with the picture's aims. It's not a great film but an interesting one, and it's certainly unique.

The budget was so tight that when shooting was completed Harrington didn't have the money to pay the lab bill. The lab involved, Pathé, threatened to take possession of the original negative until producer Roger Corman stepped in and picked it up for his Filmgroup production company. They released it sporadically before American International Pictures (AIP) licensed it for a wider release.

Like other Filmgroup titles, Corman's short-term interests in Night Tide hurt it in the long run and, over time, its original film elements were apparently lost. However, in 2008 the Academy Film Archive undertook a restoration of what survived, funded partly by The Film Foundation and with support from an ailing Harrington himself. Kino's new Blu-ray sources this restoration, which mostly looks quite good. Supplements include a wonderful audio commentary track with Harrington and Hopper done for the film's 1998 laserdisc release, as well as an excellent 1987 interview with Harrington conducted by historian David Del Valle. 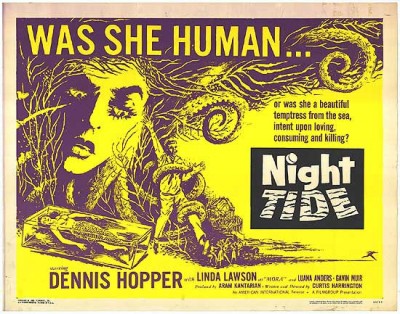 Hopper plays lonely seaman Johnny Drake, who spends his shore leave aimlessly wandering the Santa Monica Pier. At a beatnik coffee shop/bar, one of the few genuinely authentic-looking places among Hollywood films (even the music, performed by jazz flutist Paul Horn, is excellent), he meets Mora (Linda Lawson), a starry-eyed, mysterious young woman who works on the pier as the performer at a sideshow attraction operated by her guardian, former sea Captain Murdock (Gavin Muir). There Mora becomes "Mora the Mermaid," donning a fish-like tail and appearing to sleep underwater in a big tank.

Mora is initially wary of Johnny, but he's persistent and eventually the two begin to fall in love. Others, however, are concerned for Johnny's safety. Ellen Sands (Luana Anders) and her grandfather (Tom Dillon), who operate the antique merry-go-round on the pier, inform Johnny that two of Mora's prior suitors died under mysterious circumstances. Even more disturbing, Mora seems to be under the delusion (or is it?) that she really is a mermaid, and that fellow sirens are beckoning her back into the sea.

Night Tide uniquely straddles the worlds of art and commerce, a lifelong facet of Harrington's work. Born in 1926, he made amateur movies, worked as a film critic, and went to film school at USC and UCLA. Heavily influenced by Maya Deren, he began directing avant-garde shorts in the 1940s and became personally and professionally close to filmmaker Kenneth Anger and artist-occultist Marjorie Cameron.

Throughout, he remained an avid film buff. Harrington got to know fellow gay filmmaker James Whale in his last days, and later rescued Whale's The Old Dark House (1932) from certain oblivion. (Both Whale and Harrington are regarded as proto-Queer Cinema auteurs.) In later years Harrington was the subject of a major retrospective held at the American Cinematheque in Hollywood, but was just as often seen there as a simple film fan. He died in 2007, a great personal loss to his many friends at the Cinematheque.

Night Tide is like a fever dream, and the hazy, mildly sleazy, fantasy-like atmosphere of the Santa Monica pier and incongruous Venice, with its decaying, Italian-inspired architecture, contribute enormously to the film's dreamy state. (Harrington uses location too rundown even for Orson Welles when he made Touch of Evil there a few years before.) Most of the original locations, including the 1922 carousel, later prominently featured in The Sting (1973), still survive in 2013.

Lawson and especially Hopper are likewise in synch with Harrington's aims. Hopper's sailor is desperately lonely and vulnerable, undaunted by the concerns of Mora's neighbors that she might be a murderess. Their clearly doomed-from-the-start romance has a beguilingly fatalistic air, yet also plays as emotionally genuine. It's a good pre-Easy Rider performance from Hopper.

Night Tide looked pretty good on laserdisc, but Kino's Blu-ray is even better, presenting the film in 1080p in 1.66:1 widescreen. Though the film's title elements are in poor shape the rest of the picture looks quite nice. Detail is so good one can see the wires holding shut the beak of a restless seagull Mora holds in one scene, while in the distance the late, lamented Pacific Ocean Park is visible further down the coastline. The mono English-only audio is fine; no subtitle options.

Supplements are limited but exemplify the need to archive and keep available invaluable audio commentary tracks like this one, featuring Harrington and Hopper, both of whom have since died. Originally recorded for the laserdisc version, Harrington especially has vivid, detailed memories of the production, and Kino was very wise to license it. Also included is a two-part video interview from 1987 with Harrington by an enthusiastic, informed David Del Valle. Finally, a trailer, possibly from the same master as the laserdisc, rounds out the supplements.

Unique and fascinating, Night Tide is not a great film but it's an extremely impressive feature debut, while the extra features help put it into perspective. Highly Recommended.