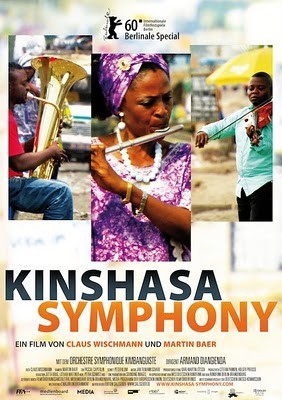 Kinshasa Symphony is a beautiful and moving documentary film by Claus Wischmann and Martin Baer. The documentary is about an orchestral group of musicians living in Kinshasa within the Congo. These talented musicians are every bit as determined and passionate about performing music as anyone could ever possibly be but they are faced with even greater difficulties in being able to perform the music. The struggles are deeply human, intensely real, and the outcomes are the moments of hope that provide insight into the determination of all people and are compelling reasons and reminders to follow out our dreams.

Kinshasa Symphony is a documentary about people who make music and it is about the music they make too. There is a fine line distinction to make in regards to that aspect of analysis. One might feel as though the documentary is even more about insight into the culture and lives of the people, but it is still a showcase of the musical abilities of these musicians. The documentary filmmakers do a great job of balancing these two essential elements.

The poverty surrounding the environment prohibits the people of Kinshasa from being able to afford as many instruments as needed. This is one element that reaches some notable discussion. The music director discusses how the instruments take time and money to be made that they simply can't afford. Many of the musicians will share instruments and use them for practice at twenty minutes at a time (especially for those wishing to begin to be learners).  These are difficulties that put a strain on everyone hoping to experience all the joy associated with learning and exploring musical abilities and potential talents. 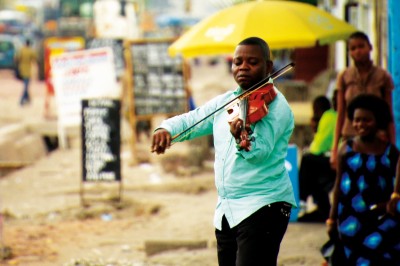 The film alternates between showcasing aspects of the daily lives of these members in said Kinshasa Symphony and showcasing the rehearsals leading up to a big performance for the community. The concert is free and is aimed towards enriching and entertaining everyone inside the community. This important documentary presents the unfortunate poverty that negatively seems to affect most of these people and it doesn't pull away from the difficult material. While it is not always an easy film to watch it is one that remains constantly as invigorating and enlightening.

The music is understandably a wonderful reason to want to experience the film as well, though. Hearing Beethoven's Ninth played by such a large orchestra and with so many different vocalists is an accomplishment in and of itself. The fact that the music is also incredibly beautiful and moving is a huge testament to the talent and time invested in bringing the show together for all of the people in Kinshasa.

I was moved by the big investment in energy and passion for music-making performances. It helped to make this documentary one of the most easily recommended ones I have seen recently and quite unexpectedly one of the best all-around efforts too. If experiencing a slice-of-life film in documentary form or style and especially if you are someone who is interested in learning about a different culture and the efforts made in performing the classical masterpieces this is a good documentary fit for you. It's compassionate and notable filmmaking on every level. 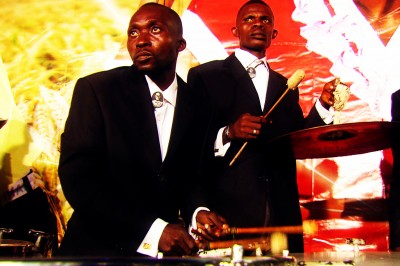 Kinshasa Symphony is presented in 1080p High Definition. The picture quality is somewhat inconsistent. The color reproduction is excellent and the level of detail is effective but there seems to be an array of shots that are somewhat blurry and less sharp than the norm. This was probably a result of whatever equipment was used to film this production. It is difficult to describe the results as disappointing. The image quality is significantly high in quality in comparison to most documentaries available. It is a good showcase for the possibilities of the Blu-ray format in preserving important documentaries. The Blu-ray release preserves the theatrical exhibition aspect ratio of 1.85:1.

The audio presentation is high quality with a vital DTS-HD Master Audio 5.1 surround sound option. An additional 2.0 Uncompressed PCM mix is also included. This is sort of surprising for a documentary release. Not only are there two lossless audio options but both are the impressive audio-rich presentations that few would expect. The music is reproduced with great clarity and care. I was not disappointed by an enveloping soundstage of the Congo.

Inside the case is a detailed and enjoyable booklet with information about the film and the people involved. It also contains a good selection of photographs.

The only video feature is a collection of short deleted scenes. These scenes don't really add much to the narrative of the documentary so it isn't difficult to understand why they were ultimately cut out of the film. However, these moments still add something to the overall experience for those willing to devote a few more minutes to understanding the people who make up the Kinshasa Symphony. (10 Minutes and in AVC High Definition).

Trailers for other C Major releases are also included. 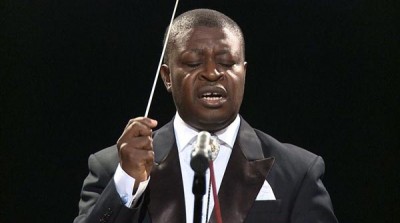 Kinshasa Symphony's an effective documentary that explores the lives of a struggling nation of people. Within the nation there are people united by a love of classical music: a universal language that transcends barriers of words. As you witness the creation of instruments and the joy brought to the people by the power of sharing and creating music together you can become transported and reminded of the immense spiritual wonder of music. This is a film that can be enjoyed and admired by anyone with a passion for music. Music is a wonderful thing that is important and necessary in all cultures and paths in life and this documentary serves as a love letter to that glorious realization.